King of Kong: A Fistful of Quarters, The 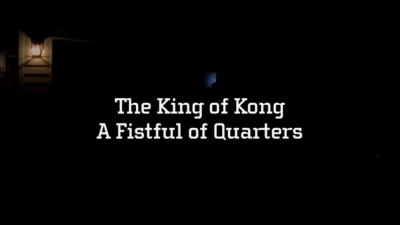 
The Movie
If you like video games, there's a good chance you've been in a video-game store like GameStop. But if you're not a "gamer," entering this world is akin to finding yourself in a leper colony. The stores are populated by people who take a recreational activity more seriously than important things like, say, showering, which is a freaky thing to someone who tries to live a well-rounded life. Gamers aren't alone in this odd behavior (most any hobby has people like this) but they seem to be a bit more unusual, as they are so enthralled in playing virtual games, which is just a hair above playing pretend on the scale of sad social value for adults. These are the people who make up the cast of The King of Kong: A Fistful of Quarters.

They are not the stars of the film though as the stars don't fit into this untouchable caste. The stars are Steve Wiebe and Billy Mitchell, two men who could not be more different. Billy Mitchell is the kind of person who only existed in movies until this point, the owner of a family-run restaurant chain and hot-sauce empire, and a video-game world champion in the '80s. From his luxurious mane of hair to his unchanging wardrobe, from his inspiration-poster quotes to his Machiavellian scheming, he is, in essence, a supervillain, who has no shame in the how he crafts his "evil" persona, and his score on Donkey Kong stood for years as a world record no one could touch. 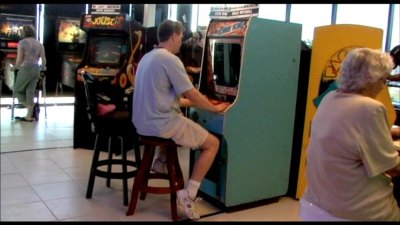 Steve Wiebe is an amazing man with incredible talents and the kind of heart and attitude that you wish most people had. Unfortunately, he's never experienced much success in life. Then, when another unfortunate turn of events happened upon Steve, he found himself with a lot of spare time. With that spare time, he discovered he was really good at something after all: playing Donkey Kong. He shattered Mitchell's previously-unapproachable record and found some meaning in life. But that's just the beginning of the story, as the score had to be validated by the "independent" Twin Galaxies organization, of which Mitchell is a high-ranking official, and which is staffed by people loyal to him. Thus begins Wiebe's quest to prove he's the best, and to overcome Mitchell's schemes and cronies along the way.

If one was to submit a script with the plot of this film and the cast of characters, it would be laughed at for being ridiculous. But here is the reality, where people like Mitchell's pal Brian Kuh, a retired thirtysomething banker who moved to New Hampshire to play classic video games all the time, acts like a sidekick from an '80s film, reporting Wiebe's every move to Mitchell. Kuh, as a character, shouldn't exist in real life, as Mitchell's gang of acolytes is stunningly pathetic in the way they defend their hypocritical leader, making you wonder just how far they would go for him. The exaggerated way Mitchell manipulates the situation is worthy of Lex Luthor, but yet it takes place in the tiny confines of competitive retro video gaming, making the film endlessly interesting.

Thanks to a great deal of luck and a self-promoting band of entirely un-self-aware bizarros, the camera never seem to miss a beat or a plot point, always in the right place at the right time, with just the right angle (a fact that becomes entirely clear in a pair of amazing moments near the end.) As a result, you learn a lot about an incredibly interesting circle of people, including a meditating, ex-druggie video-game ref, a revenge-seeking nutbar with an immense ego, and Steve's understanding, yet suffering wife. That's a great advantage for the film, but the way it's all presented, with energetic and innovative use of footage of the games they play, makes it all the more enjoyable. There's such style at work in this movie, with excellent visuals and great music that fits the film perfectly, including some classic '80s anthems and two scenes that are brilliantly backed by music performed by Wiebe, lending them even more power. Even if the story wasn't so interesting, the way it's told makes it a a fantastic 90 minutes of engaging human conflict.

The only negative to this story is a lack of pay-off, thus confirming its veracity, as you'd never let a film this good end the way it does, if you had the option. Mitchell actually manages to manipulate how the film unfolds, like just about anything in his life, but in doing so, and aided by his ridiculous soundbites, he truly comes off as a bad, petty person. The film, like all good documentaries, has an absolute point of view, which may affect how Mitchell and his crew of fellow gamers look, and there are some complaints out there from the participants, claiming they were lied to by the filmmakers, resulting in their appearance in the movie (some of the extras round things out a bit though.) Even so, it would be awfully hard to "cre-edit" the way these people talk and act in front of the camera, which is all that counts in the end. These people are who they are, an intense group of enthusiasts who have hung the "No Vacancies" sign out on their clubhouse. In that way, it's easy to see someone you know in this small-scale movie, making it a universal success. 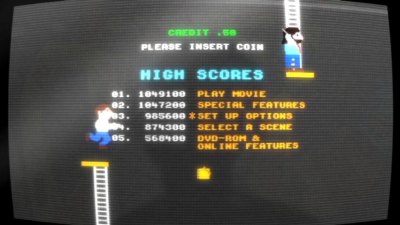 The DVD
A one-disc release, the DVD is packed in a standard-width clear keepcase with a two-sided cover, featuring a lame piece of art (not the beautiful arcade-style poster the disc was promoted with) and an alternate cover image from artist Scott Campbell. The DVD has wonderful animated anamorphic widescreen menus built around "Donkey Kong," with options to watch the film, select scenes, adjust languages and check out the special features. Audio options include English Dolby Digital 5.1 and 2.0 tracks, while subtitles are available in English and Spanish, along with closed captioning.

The Quality
The anamorphic widescreen transfer on this film is excellent, though the quality of the image changes depending on the setting and camera used, and whether the footage is new or source material. For the most part though, the video is clean and clear, with solid, but not particularly vivid color. There were no noticeable problems in the image, with no dirt or damage evident, no obvious compression problems and just a small amount of pixilation (most along hard edges.)

The Dolby Digital 5.1 track is crisp and distortion-free, but it doesn't do much with the side or rear speakers, as is usually the case with a documentary. The center speaker handles the work throughout the film, though when the movie busts out its well-chosen soundtrack, the surround speakers help enhance the sound.

The Extras
The bonus material kicks off with "The Saga Continues," a Star Wars-esque text scroll that updates the film's story as of September 4th, 2007 (the day the DVD was finalized.) The info is most welcome by anyone who enjoyed the film and wants to know where everything stands, many months after the film ended.

The biggest extras here is a pair of audio commentaries, which explore the film in two different ways. First up is a filmmakers track, with director Seth Gordon, producer Ed Cunningham and associate producers Clay Tweel and Luis Lopez. As expected, the commentary focuses on how the film was created, with thoughts on how they captured the various and disparate parts of the story, and the decisions that were made in crafting the movie. The participants have plenty to say and manage to not step all over each other in chatting about the experience, making it a quality track.

The second commentary is from IGN.com Entertainment Editorial Director Chris Carle and "i am 8-bit" art exhibition founder Jon M. Gibson, and isn't quite as good, thanks to their lack of involvement in the movie. As a result, they spend most of the time either joking about Mitchell, analyzing his narcissism, or chatting about the history of gaming. The attitude is a bit too "cool" for my tastes, and doesn't add a lot to the proceedings, an unfortunate symptom of many such "outside insider" commentaries.

Almost 52 minutes of bonus footage is up next, 10 segments that include moments from Q&As at screenings of the film, follow-ups with some of the film's subjects, profiles of referee Walter Day, Wiebe's music and Mitchell's style, and full-length clips of found footage seen in the movie. Carle and Gibson redeem themselves with quality commentary on a side-by-side comparison of Wiebe and Mitchell's Donkey Kong gameplay, just one of the great aspects of this section of the disc. It's followed by 11 pieces of extended interviews with the game-players in the movie. In the nearly 42-minutes of interviews are some amazing moments, as you get to know some of the peripheral players better, which confirms most of the thoughts you probably will have about these people following the main feature. It's no stretch to say that the 94 minutes of clips here (which can be viewed separately or in two chunks) can be just an entertaining as the film itself, and help make this DVD a rather complete package.

The remaining extras are somewhat filler, including a short animated piece on the history of Donkey Kong, a text glossary of arcade terms and a gallery of art from the "i am 8-bit" exhibition. The disc wraps with some trailers, including the theatrical preview for The King of Kong, and the usual non-specialized DVD-ROM features (read: web links.) 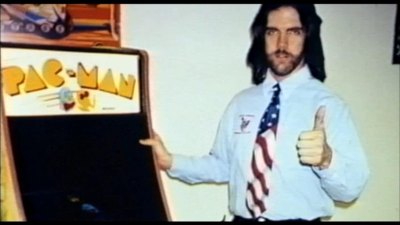 The Bottom Line
This movie is an utterly fascinating look at an obsessive man, people you would try to avoid at all costs and the incredible way that even geeks have exclusive cliques. The story is so incredibly over-the-top and perfectly constructed, with such an amazing cast of characters, that if it wasn't known to be real, you would have a hard time believing that it's not a mockumentary. The DVD presentation is excellent, with a healthy selection of supplemental material that only adds to the value of the main story, especially due to the updates in the tale. Though many claim the film is funny, I found it more frustrating due to the situation illustrated, but extremely entertaining nonetheless, and one that any fan of the adage "truth is stranger than fiction" will enjoy, as it's one of the most perfect documentaries ever about a man you will have no trouble cheering for.