Ya gotta love revenge flicks.  Those movies where a highly trained soldier/CIA Agent/mercenary gets pushed over the edge and goes after the bad guys with a vengeance are always a lot of fun.  There's just something about cheering for an anti-hero that is a bit liberating.  2004's Man on Fire is such a film.  Filled with impeccable actors and a tense script this is a good solid film that in another directors hands could have been great.

John Creasy (Denzel Washington) is an ex-CIA agent who is barely holding it together.  His years with the company and the things that he's done have weighed heavily on him. He drinks to forget and reads the Bible hoping to find salvation in its pages.  When an old buddy of his (Christopher Walken) sets a job up for him, Creasy reluctantly agrees.  He's been hired by a rich Mexican businessman (Marc Anthony) to be the body guard for his daughter Lupita (Dakota Fanning).  It seems like an easy job and though the pay's not high, Creasy discovers something he thought he had lost:  his humanity.  The plucky and adorable 'Pita (as everyone calls her) soon worms her way into the cold man's heart.  When something happens to the girl however, Creasy discovers it's all too easy to fall back on his training as an assassin and decides to take on the Mexican underworld. 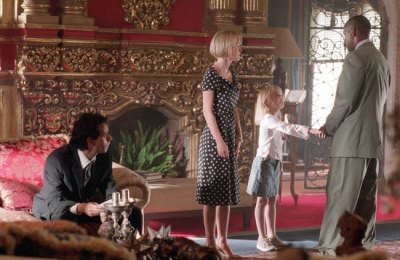 There's a lot that is right with this movie, starting with the casting.  Dakota Fanning is just amazing as Creasy's precocious ward.  She has a lot of screen presence and acts much better than a 9-year-old should be able to.  She really makes it convincing that Creasy would find some measure of peace watching over her.  The scene where Pita catches her bodyguard smiling and confronts him about it is beautiful and she plays it perfectly.

Denzel Washington is amazing as usual.  He's one of the greatest actor's of his generation, and he brings all of his skill to this role.   He's able to project Creasy's torment and anguish but also to make his character three-dimensional and not a caricature.  An excellent performance. 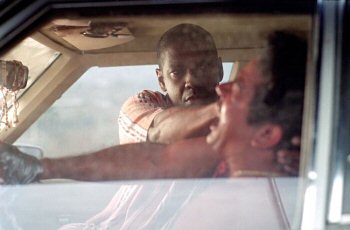 The script was also pretty good though there were some flaws.  The narrative drags in a few places, and the movie would be improved if 10 or 15 minutes was cut from its nearly 2 ½ hour running time.  There were some nice twists in the story but those were overshadowed by one really stupid, nonsensical twist that was tacked on at the end to give the film a more upbeat ending.  In addition there were a couple of minor plot holes that made the film less than perfect.   The story did have a lot of suspense and some really excellent scenes (when Creasy is training Pita to jump off the blocks for example) and it's easy to overlook those imperfections.

Much harder to overlook was director Tony Scott's MTV-style of directing.  Haven't we evolved past the shaky camera movements and hyper-kinetic editing fad yet?  The frequent jarring camera movements, ugly double exposures, and overly fast edits made it hard to just sit and watch the movie.  Editing and effects like that should be invisible.  The viewer should be so into the film that they don't notice the techniques used to tell the story.  The film should just create a feel.  Scott fails miserably at this.  Whenever he tries to use some fancy technique viewers are reminded that they're just watching a movie.  It pulls them out of the moment and they have to struggle to get back into the film.  For a music video, those type of things are fine and work well.  They don't for a feature film. 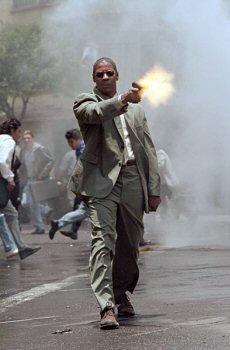 This film comes to us with a 1080p/AVC MPEG-4 encode that looks absolutely fantastic.  The thing that first jumps out to viewers is the amazing detail that is present.  The smallest objects are well defined and everything that appears on screen is detailed.  The chapel in Lupita's house is a good example.  The candle flames, the religious icons on the walls, and the small alter itself are all strong and solid though this set is always shot in low light.  The blacks are solid and deep too.  The colors are a bit oversaturated in a scene or two, something that really bugs me, but this is the exception rather than the rule.  Skin tones look natural and the contrast is excellent.  On the digital side there wasn't anything to complain about.  Aliasing, posterization, and other common defects were absent.

The film gets a DTS HD 5.1 Master Lossless Audio track that sounds wonderful but has a problem.  First the good news:  the full soundstage is used throughout the film to good effect.  The action scenes really come alive with gunfire, explosions, and random noise filling the room from every corner.  The sub gets a good workout too, especially when the battles are raging.  After the action dies down the rears are still employed, surrounding the viewer with ambient sound that really reproduces the feel of Mexico.

The bad news is like the director's kinetic shooting style, the music is overbearing.  It is often mixed so loudly that I had to adjust the volume, and there was more than once when it obscured dialog.  Honestly, do we really need blaring Linda Ronstadt in the film?  Aside from this flaw, the movie had a great sounding track.

Well, Fox decides to screw fans of the film by giving them a bare-bones edition.  Earlier releases have been filled with commentaries, deleted scenes and documentaries but none of that makes its way onto this disc.  The only bonus material is a couple of trailers.   Though it looks like Blu-ray will win the format war, it still hasn't won the hearts of consumers.  Not bothering to port over previously released extras won't help convince Joe 6-Pack to invest in the technology.  Why pay more to get less content?

A very good film that is marred by director Tony Scott's insistence on shaky camera movements and ugly double exposures, in the hands of someone else it could have been great.  Washington and Fanning do a magnificent job and it's worth watching just to see their interaction.  The Blu-ray disc does good job of reproducing the look and sound of the film, though the music was mixed too high in several instances.  Not prefect, but worth checking out.  Recommended.