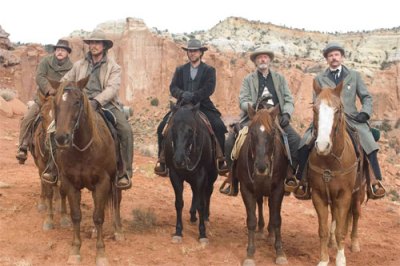 Movie genres tend to come and go in waves. Prior to the release of Star Wars, science fiction was considered to be a complete financial sinkhole by the studios. Westerns, which used to be a mainstay of American cinema, are now so rarefied that the only modern touchstone we have is Clint Eastwood's swan song to the genre, Unforgiven. To that point, whenever a new western does come out, we inevitably see quote claiming it's the "best film since Unforgiven," and that very phrase graces the front cover of 3:10 To Yuma, James Mangold's follow up to the Oscar nominated Walk The Line.

Dan Evans (Christian Bale) is a hard working Civil War vet (he fought for the Union), who, despite his best efforts, can't dig himself out of the mountain of debt he's incurred. Dan sees a way out when he stumbles upon notorious outlaw Ben Wade (Russell Crowe) and helps the authorities capture him. For $200 he agrees to make sure Wade is escorted safely to catch the 3:10 train to Yuma prison. But the trip is dangerous, and Wade's men are close on the heels of Evans and his group.

3:10 To Yuma was originally made in 1957, in a time where westerns were simpler. Modern westerns tend to examine the myth of the west, to the point where we no longer see the simple adventure yarns that used to dominate. Yuma takes us back to that simpler kind of storytelling, where the good guys are good and the bad guys are bad (except when they're not so bad). For that alone, it's somewhat refreshing. Bale is an excellent anchor as Evans, fully fleshing out a character who could easily have been one-note. But on the whole, these positives aren't enough to elevate the film beyond being simply entertaining. 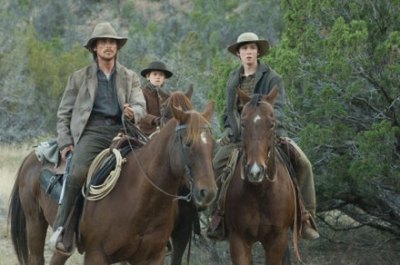 Russell Crowe is certainly charismatic as Wade, but his development isn't as rock solid as Evans'. He's far more mercurial, seemingly as the scene demands. His relationships to the other characters are also far less defined, with the exception of his growing respect for Evans. His gang never really feels like much of a threat, nor do the various obstacles the pair face on their way to Yuma. Even when they're stuck in a valley being shot at by murderous indians, the stakes never feel high enough, the tension never tight enough.

The film does boast an impressive roster of supporting actors, though. Alan Tudyk of Serenity fame makes a too short appearance as a sympathetic doctor. Gretchen Mol gets even less screen time as Dan's wife, which feels like a severely wasted opportunity. Peter Fonda plays a vengeful bounty hunter, who, again, is not given much to do. Even Luke Wilson has a blink and you'll miss it cameo. I still can't understand why Mangold bothered to include all of these notable actors and not use them for any specific purpose. These roles as written could have been played by anybody. Only Tudyk manages to make something out of it.

The majority of 3:10 To Yuma feels like a missed opportunity. It's a fun story, but Mangold never makes us care enough about any of the characters to engage the audience to the level that the material demands. The action is well staged but missing a vital excitement. And, aside from Bale's depiction of Evans, none of the characters are ever developed enough. There's fun to be had in 3:10 To Yuma, but it all lies on the surface. 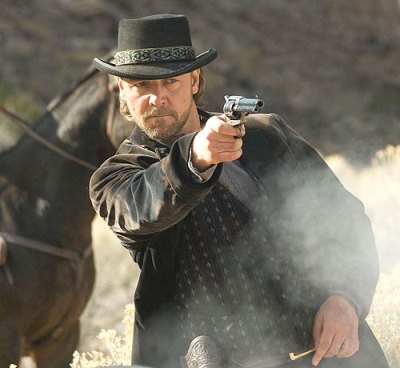 The Image:
I was quite surprised to find that this 2.40:1 1080p transfer was encoded with VC-1, as Lionsgate typically uses AVC. My shock aside, 3:10 To Yuma looks pretty darn good, bursting with color and detail. The harsh browns and golds of the old west pop off the screen, with not a mark on the print. Detail is also excellent, with the crags on Peter Fonda's face and the individual hairs of Russell Crowe's beard as plain as day. The only problem is the application of edge enhancement, which gives a sheen to the material that wasn't intended.

The Audio:
Lionsgate gives the usual lavish audio treatment to 3:10 To Yuma, with both lossless 7.1 PCM and lossy Dolby Digital EX 5.1 tracks available for your listening pleasure. Of the two, the PCM is by far the superior, with fantastic range and depth. The soundfield is always abuzz with ambient effects, and the surrounds get put to constant use. Whether it's the crackle of gunfire or the pounding of horse's hooves (or the thunder of an oncoming train), there's always something to impress with this track. 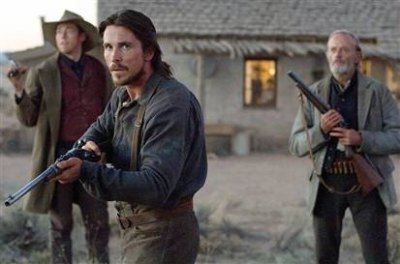 The Supplements:
Taking full advantage of the space provided to them with Blu-ray, Lionsgate has not only included all of the special features from the standard DVD, but they've reproduced them all in high definition. Not only that, but they've created some brand new features exclusive to the Blu-ray disc. 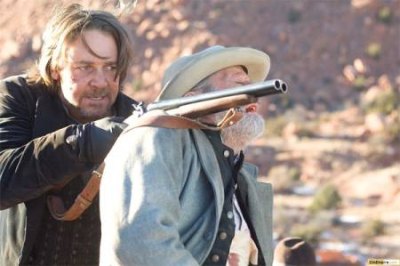 The Conclusion:
3:10 To Yuma contains all the elements for a rip roaring western yarn, but they never quite gel together. It feels too leisurely for its own good, never working up the excitement the material requires. However, it does look and sound great on Blu-ray, and includes extra content not on the DVD, all in high definition. Fans will want to buy this without hesitation, while anyone else should just Rent It.

Note: The images in this review are not representative of the quality of the Blu-ray disc.