Before Stephen Chow became a household name in America with his films
Shaolin Soccer and Kung Fu Hustle, he was a big star in Hong
Kong. Dragon Dynasty has released a pair of his earlier films, The
Royal Tramp and The Royal Tramp II in a nice double disc set.
While the films are a bit uneven, they are certainly funny and have a great
time poking fun at some of the conventions of martial arts films. 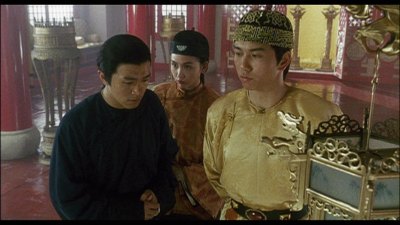 In
the first film, Wei Siu Bo (Chow) is a story-teller, con man, and all around
slacker who gets caught in the middle of a brewing civil war. While
spinning tall tales in a brothel, Bo helps the leader of rebel faction
escape from the soldiers of a renegade general who is planning on seizing
power from the Emperor (Derek Wan). Because of his bravery, the leader
offers to teach Bo his masterful knowledge of Kung fu, but only after he
infiltrates the palace as a servant as steals the Book of 42 Chapters that
holds the key to overthrowing the Emperor.

Bo goes to the palace, but being impatient doesn't want to wait in the
long line of job applicants and heads for the door with no waiting instead.
The thing he doesn't realize is that by entering, he's applied to be a
palace eunuch. Saved from the knife by the head eunuch, Bo
get embroiled in yet another plot: this new master wants him to steal
the Book of 42 Chapters too. Bo soon meets the Emperor and his sister,
and they take a liking to the befuddled man too. The next thing he
knows, the Emperor has commanded him to spy on his new master. With
his only loyalty lying with himself, Bo has a lot of fast talking to do
to convince everyone involved that he's really on their side. 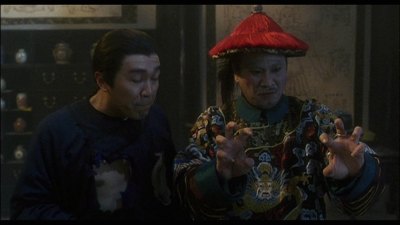 This
movie is really funny. It's bathroom humor to be sure, after all
the movie starts in a whore house and moves to the eunuch quarters in the
palace, so dick jokes fly fast and free. There's also a good mix
of visual and verbal humor that kept me laughing the whole time.
There were a lot of good bits through the whole film. One of the
running gags is that everyone wants to teach Bo their secret kung-fu moves,
but they don't have time. The head Eunuch offers to teach Bo his
Bone Dissolving Palm, but it takes 50 years to learn. Instead he
teaches him the "Unrelenting Nipple Grabbing Hand" which is pretty easy
to master.

This film also parodies a lot of choppy-socky films. There's a
hilarious scene in the beginning where the renegade general takes on a
whole attacking unit by himself. Jumping high in the air, wires plainly
in site, he runs across the fluttering flags his men are carrying and attacks,
grapping the enemy's braided hair and using it to pull their heads clean
off their bodies. It's so ludicrous and over-the-top that it's hard
not to laugh.

The Royal Tramp ends abruptly, and is continued in the second
film, Royal Tramp II. It's obvious that these two films are
meant to be separate parts of one whole story, but the tones are very different.
As where the first movie is played for laughs, this second installment
has comedy take a backseat to political intrigue and fight scenes.
It's still a comedy, but the jokes don't fly nearly as quickly as in the
first installment. 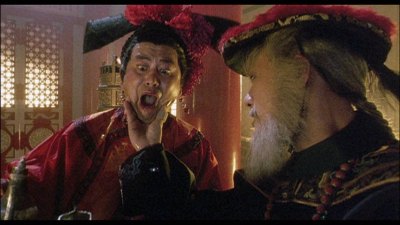 In
the chapter, Bo is no longer struggling for food and a trusted advisor
to the Emperor. The young Emperor is worried about a powerful lord
in an outlying province, so in order to stop his possibly rebellious thoughts
he promises his sister, King-nan (Chingmy Yau), to the Lord's son.
Things get pretty complicated after that. While transporting King-nan
to the other Lord, the caravan is attacked by a one-armed nun, the princess
is saved, but Bo is taken prisoner. He manages to get the nun's disciple
to fall in love with him, just before a villainess from the first movie
(Sharla Cheung who, at the beginning of the film takes a bath with an old
had and turns into Brigitte Lin) attacks and also falls in love with Bo.
Of course there's a female martial arts master (yes, another one) a good
friend of Bo's who betrays him every chance he gets, and another attempt
to overthrow the Emperor.

While this film's plot is a little bit more complex at the expense of
the humor, the fight scenes are much more entertaining and staged with
more care. The film does have its moments and the running gag about
every woman falling for Bo raises a few chuckles. Still, when compared
to the first film, this doesn't quite meet expectations.

These films come with the original Cantonese audio with optional English
subtitles or an English dub. It's hard to pick one as being better,
as neither option is very good. I'd normally just go with the original
language track, but in this case the subtitles are pretty bad. Not
that there's a lot of grammatical errors, but because whomever did the
translation didn't have a sense of humor and a lot of the verbal jokes
are missing. In one scene early in the first film a prostitute comes
running out of her room because her client's penis has disappeared into
his body. The dub track explains the situation (and sets things up
for the sight gag to come):

Audio: Help! We've got Johnson trouble! His Mr. Happy
has disappeared. (Later): He's the one with the Willy-worries.

When watching the film with the subtitles however, I couldn't understand
what was going on:

Subtitles: Help! Someone is sick. Find someone to
help him. (Later): It's him, he's sick.

That doesn't set up the joke to come. I thought he had the flu.

The jokes were much more humorous in the dub too. In the dub,
Bo's signature move was the "Unrelenting Nipple Grabbing Hand". In
the subtitles it was referred to as the "Fool-proof Breast CatQing (sic)
Hand" which isn't nearly as funny, especially when the viewer spends a
lot of time trying to figure out that by "CatQing" they mean "Catching".

The subtitles don't translate signs either, something that is needed
for a couple of jokes, especially the one where Bo walks into the Eunuch
recruitment office.

The dub though is mediocre at best. The voices don't match the
actors very well, and a lot of the female voices, especially the Emperor's
sister, were high pitched and irritating. When all is said
and done, neither option is perfect.

I was pretty disappointed with the look of these films. They were
both made in 1992, so I was expecting a pretty good transfer. That's
not what we get. The anamorphic 1.78:1 image is marred with a large
amount of digital noise throughout. It's really bad in the scenes
where the sky is visible, but it is clearly visible in the whole film and
can be distracting. The colors are a bit muted too, though the detail
is acceptable. Overall this looks like an unrestored movie from the
60's or 70's more than a 15 year old film.

Each movie comes with a commentary track by film expert Bey Logan.
These were exceptionally good tracks, explaining a lot of the jokes that
western audiences will miss, giving the background on the actors and generally
filling the time with informative comments. Each film also comes
with the original theatrical trailer, and the second disc has an interview
with writer/co-director Wong Jing.

These were funny films, especially the first one. Though I missed
a lot of the cultural references I was still able to laugh my way through
these movies. It's only to bad that the video quality isn't better
and that the subtitles do such a poor job of translating the film.
Even with these faults these are films worth watching. Recommended.