Independence Day is a guilty pleasure of mine.  It would
be really hard to defend this summer blockbuster from 1996.  The music
is overproduced, there are plenty of plot holes and amazing coincidences
that advance the plot, none of the characters are really developed and
the story is overshadowed by the special effects.  In spite of all
that, I really enjoy watching this film, even though I know I shouldn't.
That's why I was excited when the Blu-ray disc of this film was announced;
another excuse to watch this fun, silly film.  It looks better than
it ever has on this disc, with a beautiful picture and an amazing audio
track.  Fans, like me, who've been waiting for this disc will be pleased
with the presentation although the bonus items are lacking.

On July 2nd a gigantic alien space ship (it has ¼ the mass of
the Moon) enters Earth orbit and releases a series of huge discs, 15 miles
in diameter each, that take position above various large cities around
the globe.  They sit there, silently, for hours, until at the appointed
moment they each open a portal at the bottom and release a death ray that
totally destroys the city that they are stationed above.  They then
move on to their secondary target, slowly but methodically annihilating
the cities of Earth.

On July 3rd, the nations of the Earth counter attack, launching their
jets and missiles against the invaders.  It's a futile effort.
A force field around the ships prevents the bombs from even touching, and
they explode impotently still far from their targets.

Then, on July 4th, Independence Day, a crazy plan is hatched that just
may tilt the advantage to the human side. 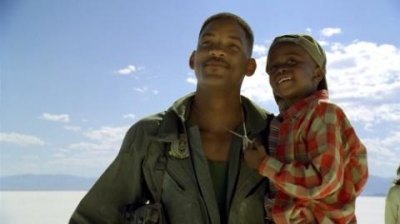 This is a typical disaster movie, with a large cast of characters that
the audience is supposed to identify with.  There's Marine pilot Captain
Steven Hiller (Will Smith) who is dating a stripper with a young kid, President
Thomas J. Whitmore (Bill Pullman) who everyone turns to as the world is
being destroyed, and David Levinson (Jeff Goldblum) a brilliant underperforming
genius who happens to be the ex-husband of the President's Press Secretary
and has decoded a signal that the aliens are using to time their attack.
As the devastation mounts, the various characters and their loved ones
become endangered.  Who will live, and who will die?

With some splashy special effects that still look fine today and a good
cast this movie is really enjoyable in spite of the poor script.
Will Smith is delightful as the cocky pilot who shoots down a alien fighter,
and Pullman does a good job as the President.  His rousing speech
at the end illustrates that he has the charisma to become elected, but
in private he seems like a genuinely nice guy.  Just what we all want
for a president but never get.  Jeff Goldblum is at his nerdy best
too.  Judd Hirsch steals every scene he's in as Levinson's father
who acts as comic relief without ever getting stupid or idiotic.

Unfortunately the same can't be said of the rest of the film.
If you think about it, this movie has all of the worst aspects of big budget
Hollywood films all wrapped up into one.  The music swells every time
something good or bad happens, telling the audience how to feel, and against
all odds the disparate stars of the film miraculously end up all together
by the end.  That pales in comparison to the ending of the film which
has the most idiotic and nonsensical plot element of any movie ever.
In spite of all of these flaws, Independence Day is a great popcorn
flick that's really enjoyable to watch. 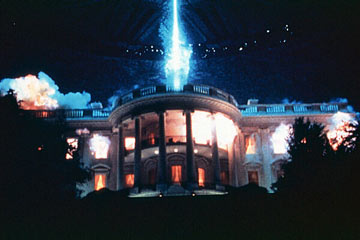 This Blu-ray disc contains the original 145-minute theatrical version
of the film.  The longer "Special Edition" cut (153-minutes) which
has been released previously on DVD is not included.

This disc comes with an AVC (@27MBPS) encoded 2.35:1 image on a 50 GB
Blu-ray disc and it looks really good.  I was very impressed with
the first scenes of Armstrong's footprints on the moon.  The motes
of dust were clear and the alien ship passed overhead and vibrated the
ground causing the impressions to alter.  Likewise the contours and
fine lines on both the mother shop and the smaller city destroyers were
solid and clear.  The special effects stood up well too.  When
the smaller ships entered the atmosphere, the billowing clouds that were
being pushed ahead of them were nicely rendered and didn't look plastic
or fake the way some vintage CGI effects do.

The colors were good, and the black levels were nice too.  Some
of the scenes were a little too dark and details were lost.  At one
point an American flag is shown at night, and while the 13 stripes are
clear, the stars on the blue background aren't visible and it looks more
like a solid field of color.   There was a bit of grain in some
scenes, which was fine, but there was a small bit of digital noise in some
areas that was disappointing to see.  It was mostly noticeable in
large patches of sky.  It was a very low level, nothing like some
of the first BR discs, but it was there.  These defects were very
minor however and the things this disc has going in its favor more than
make up for it.

This movie has always had impressive audio, but the DTS HD 5.1 Master
Lossless Audio that this disc boasts really raises the bar.  From
the first shots to the closing credits, all your speakers will get a good
workout.  The film gives viewers a taste of what they are in for in
the opening scenes where the alien ship is accompanied by some deep bass
tones that will rattle your windows.  The battle scenes and mass destruction
parts will really get your sub going.  The whole soundstage is filled
with sound during these action scenes.  It's enough to make Phil Spector
envious.  The great thing about this track is that the movie doesn't
collapse into basically a stereo mix after the battles are over.
The rear speakers are used to good effect throughout the film.  In
the underground bunker beneath Area 51, there are muted warning sirens
and the sounds of scientists working coming from the rear that gives viewers
the impression that they're in the middle the scene themselves.  There
were a lot of nice touches like that which made this a great sounding film.

This is the only area that really disappointed.  The Five Star
Collection release of this movie came with three featurettes, an alternate
ending, story boards, original artwork, production stills, a DVD-ROM game
"Get Off My Planet" and the Special Edition cut with nine minutes of deleted
scenes added back in (in addition to the theatrical release.)  None
of that is included on this Blu-ray disc.  Even the deleted scenes
which were used to make the Special Edition aren't to be found.  That's
a big strike against this disc.  Remember Fox, Blu may have won the
format war with HD DVD, but it still has to compete with SD DVDs.
Right or wrong, many consumers will feel that getting bonus content (even
if some of it is lame) lessens the value of the HD product and will opt
not to upgrade.

What do we have?  The two commentary tracks, the first by Roland
Emmerich and Dean Devlin and the second by Special Effects Supervisors
Volker Engel and Doug Smith are still here.  The first is very informative
and fun to listen to, and the second is educational though a bit on the
dry side.

There are some new extras but none of them are very exciting.
The first is a pop-up trivia track that's a bit of a snoozer.  The
info, mainly on the special effects, wasn't all that exciting and didn't
add to my enjoyment of the film.  There's also an idiotic game:
Alien Scavenger Hunt.  While the movie runs, players look for
various items on the screen and collect them with crosshairs that are overlaid
on the screen.  There's only a dozen items to get over the course
of the film, and it quickly became boring.  I can't see anyone playing
this the whole way through as a game.  Maybe if they wanted to watch
the movie, but not as a game.

There's also a keyword index, the ability to bookmark your favorite
scenes, and the film is D-Box enhanced.   This last feature means
that if you are one of the very few people who have a costume made theater
seat with a D-Box rumbler attacked, your chair will shake along with the
movie.

A fun and enjoyable popcorn flick, Independence Day took in over
$300 million during its theatrical release in the US alone.  It certainly
deserves a high grade release.  This disc almost does it right.
The audio and video quality is superb, but the extras are really lacking.
The fact that they don't even include the deleted scenes or alternate ending
that were included on earlier released is just plain wrong.  That
drops my rating some what.  Still, it's the film that is the most
important thing, and this disc comes through in that respect.  A strong
Recommendation.

Note: The images in this review are not from the Blu-ray disc and do
not necessarily represent the image quality on the disc.