Warner Bros. // PG // March 11, 2008
List Price: $28.98 [Buy now and save at Amazon]
Review by Stuart Galbraith IV | posted March 25, 2008 | E-mail the Author
Loosely adapted from the long-running series of juvenile mystery novels, Nancy Drew (2007) is predictably, depressingly pandering, a film trying much too hard to be hip to pre-teen tastes - to such a degree in fact that it approaches its subject with pained smiles bordering on contempt, hardly the right approach. It's the kind of movie that leaves you wondering why it was ever made at all. Why so radically alter long-established characters and situations in such a way that it all but insults the very audience you're trying to cater to?

When it sticks to faithfully-adapted characters from the original stories and the mystery at hand, Nancy Drew is moderately enjoyable but too much of the picture unimaginatively emulates other films: Legally Blonde and The Brady Bunch Movie, in scenes that severely damage the film and leave you wondering who this thing was made for. The contempt is obvious in the tag line on all the posters - "Get a clue" - which simultaneously references another influence, Clueless. 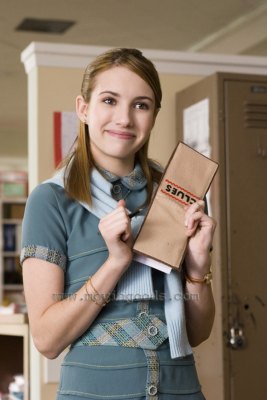 Though as a character Nancy Drew has been kicking around since 1930, the story is set in the present day, albeit with a retro look incorporated here and there. The picture gets off to a shaky start, with Nancy (Emma Roberts) nabbing a pair of crooks in her Anywhere, U.S.A. hometown of River Heights. The sequence is obviously intended to introduce Nancy as teenage super-sleuth, but instead she comes off more like Reese Witherspoon's Legally Blonde character with the physical prowess of James Bond.

Things go from bad to worse as Nancy and her widower father, attorney Carson Drew (Tate Donovan), head for Los Angeles where, at Nancy's insistence, they rent the decaying mansion in which movie star Dehlia Draycott was murdered 25 years earlier. Most of the film's running time follows Nancy's investigation of that unsolved case while she tries to win over her jaded, condescending Hollywood High classmates, who mock her old-fashioned manners and Douglas Sirkian tastes in clothes and cars.

In the flawed but entertaining quartet of '30s Warner Bros. films, Bonita Granville played Nancy Drew as an ordinary if super-energetic teenager - Sherlock Holmes she ain't - with an unusual enthusiasm toward crime-solving. Screenwriters Tiffany Paulsen and Andrew Fleming, he having created similar characters for the somewhat better Dick (1999) and also directs, fashion their Nancy as a hardcore crime nerd, an over-achiever in a generation where ambition and creativity are to be scoffed, a girl hopelessly oblivious to superficial matters of earth-shaking importance like fashion magazines and junk food.

Roberts is okay in what's more a Reese Witherspoon imitation than an original characterization, though it's not a memorable performance. It's too bad the filmmakers went the cheap, unimaginative route with the character. At one point there's the suggestion that perhaps Nancy's obsession with unsolved mysteries is because her mother died when Nancy was too young to really remember her, the one mystery she'll never be able to satisfactorily solve. Unfortunately, this promising idea gets all of one sentence's contemplation in the film before being dropped altogether.

Nancy's relationships with familiar characters like her long-suffering but understanding father, and almost-boyfriend Ned Nickerson (Max Thieriot) are appealing, but the film gums things up with singularly unappetizing new ones like fat Hollywood kid Corky (Josh Flitter). Barry Bostwick, who seems to be slowly morphing into Patrick O'Neal, turns up as one of Nancy's suspects, while Bruce Willis makes an entirely superfluous cameo.

Indeed, the Hollywood references are like something from another movie, light years away from anything Nancy Drew. At one point she's on the phone to the LAPD and put on hold for 57 minutes, an inside-joke Angelinos might get while the rest of the audience is as bemused as Nancy and her father.

Viewers can watch the dual-layered, single-sided Nancy Drew in full frame standard format or in a 16:9 transfer. The two versions of the film plus the extras have had a negative impact on the bit rate, though the Super 35 2.35:1 presentation this reviewer watched was okay, just unexceptional. Three Dolby Surround 5.1 tracks also cut into the bit rate (in English, French, and Spanish), along with subtitles in those languages. The stereo mixing is up to contemporary standards.

It's too bad that so many filmmakers and studios today insist on imposing a post-postmodern, camp sensibility to projects like Nancy Drew, raw material that, had it been done absolutely straight, might actually have appealed to preteens and even some adults. As it is, Nancy Drew is frenetic and terminally hip, but not much more.