The Movie
It's a testament to the pitch-perfect performances of Laura Linney and Philip Seymour Hoffman--and the keen ability of writer/director Tamara Jenkins to tap into the small, seemingly mundane yet emotionally charged intentions of the human mind--that a line like "Don't forget the balloon!" makes such an impression.

But there it was, sandwiched between a simple brother/sister conversation in a car and a heartbreaking exchange on a couch--a reminder that even when forced to confront life-changing tragedy, failure and personal faults, it's the little expressions of love that still speak the most about a person's character.

The worlds of Wendy Savage--a 39-year-old temp/wannabe playwright in New York City--and brother Jon--a 42-year-old professor of dramatic theater in Buffalo--overlap when they are forced to confront the deteriorating health of their father, Lenny. They haven't spoken to him in years, the result of a troubled upbringing exacerbated by the absence of their depressed mother. The two head to Arizona when their father's dementia hits new heights after his girlfriend of 20 years dies. 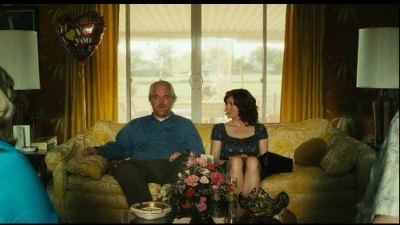 It interrupts both of their lives, which have stalled amid repeated rejection: Wendy is trying to get her (self-described) subversive, semi-autobiographical play "Wake Me When It's Over" produced, while Jon has been toiling on a book about German poet/playwright Bertolt Brecht (more on him later). It doesn't take long to realize that these siblings are not happy, and both have a big fear of commitment: Wendy has a relationship with Larry, "the married guy" who makes frequent booty calls ("We're in a motel room in Buffalo...it's embarrassing! We're a cliché!"), while Jon won't take the next step with girlfriend Kasia, who will have to return to Poland ("It's either that or we get married, and no one's ready for that."). 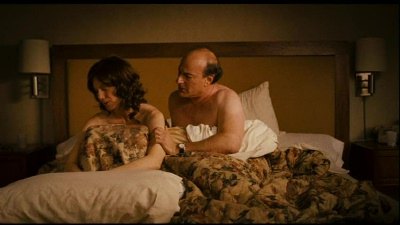 Upon reuniting, the siblings pick up with their bickering. Jenkins frequently injects memorable minutia into the script, interrupting the serious story with a parade of trivial gems that show off the characters' quirks. We feel like we've known Wendy and Jon our entire lives; everything about their relationship feels familiar. The two have an innate desire to be more successful than the other, and the sibling rivalry intensifies during this crisis. Wendy in particular has issues with needing attention, which she demands--and gets--with lies, the kind we've all thought about telling but would be too embarrassed to admit (unless you think lying about healthy Pap smear test results is something to be proud of).

Jon wants Lenny in a nursing home immediately, while Wendy holds hope for something a little less guilt-inducing ("These are practical situations that love has nothing to do with," declares Jon, pretty much his life motto). The two are also surprised to find out that while Lenny wasn't the best father, he might have cared about them more than they realized. 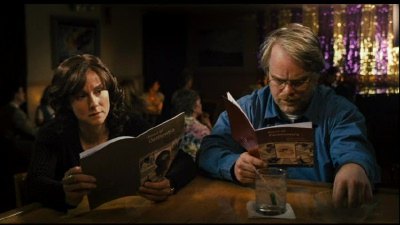 I could watch the lives of these two characters 24 hours a day. What a treat to witness two of our finest actors bouncing off each other, given the gift of an amazing screenplay. Wendy and Jon are fantastically flawed and instantly relatable, and Jenkins has an uncanny ability to tap into a fractured family dynamic through situations so many of us have faced--or will have to face soon. Her brilliant script is littered with pauses, punctuated by punch lines that are hilarious and heartbreaking at the same time: A scene on an airplane could make you laugh and cry all at once, along with many others that force a reflection on love, family, the circle of life and our fear of aging.

Linney's Oscar nomination for this role was seen as a mild surprise; many thought that fifth slot would go to the likes of Angelina Jolie or Keira Knightley. But in my book, Linney deserved to win for this intensely heartfelt portrayal, one that combines restrained anger, an ability to convey an ache-filled longing without words and an amazing understanding of comedic timing. Just watch her go on the warpath for a pillow after a fight with Larry shakes her confidence: It's a place we've all been before, and her fit of fury is a dynamic display. Wendy fears middle-aged failure, and as she sees her future while driving down a bright Sun City road decorated with palm trees, shrubs and the single-level homes of retirement suburbia, Linney's face speaks volumes. Her eyes are a constant revelation--they look for approval, they try to mask guilt, they hope, they laugh and they cry.

Many other moments without dialogue are just as powerful here, like when Wendy gets a first glimpse of her dad's new home--immediately followed by her walking down a hospital hallway in silence with Jon. It's an intense, quiet sequence, but we can hear their thoughts loud and clear. As Lenny, Philip Bosco has limited lines, but he is equally adept at conveying a world of emotion with his face. 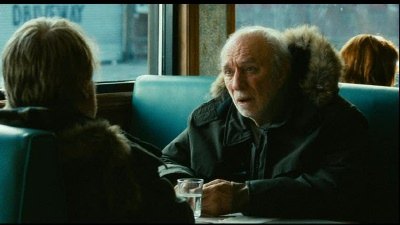 And while Hoffman's character may seem to be a slight sideshow at first, just wait--his growth comes more quietly. He clings to his fascination of Brecht, who popularized the idea of "epic theatre" on pillars of thinking, argument and reason. It's an emotionally distant experience, in contrast to dramatic theatre, where emotion, suggestion and sensation rules. It's a great parallel, and Jon seems oblivious to the influence. 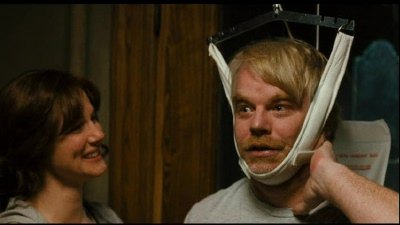 Hoffman is marvelous in a scene that many actors would have blown, as Jon tries to feign excitement for one of his sister's accomplishments while his head is rendered immobile, the result of a strained neck. The inability to escape the situation or mask the degree of his true feelings leaves him naked and exposed, and it's those moments of vulnerability that Jenkins frequently puts her leads in. The camera is constantly placed at a distance, the performers engulfed by their surroundings--whether a stark gymnasium or a foreign living room--providing an unforgiving environment that allows no escape for their unease. 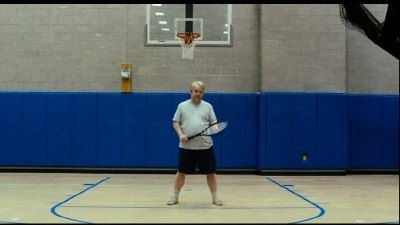 For my money, Jenkins (best known for her debut Slums of Beverly Hills) deserved the Oscar for original screenplay. I enjoyed Juno, but this material and its script will prove to have more staying power--it holds up well with repeated viewings--and is a far more universally resonant work. I laughed, and laughed hard, a lot while watching this film: the tennis scene, the movie night aftermath, the refreshments, the parking lot outburst...there's an endless supply of poingant and painful moments. Just like that balloon...that metallic "I Love You" heart attached to a ribbon that Wendy clutches for dear life when she first sees her bound, bed-ridden father, a balloon that Jon embarrassingly holds while his anger mounts as he sits on a hideous yellow velvet couch. For The Savages, it's all in the details. 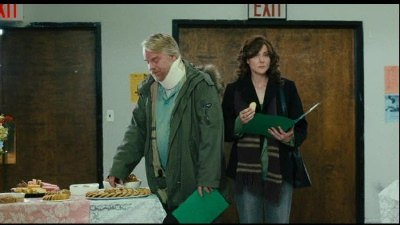 Video:
Presented in an anamorphic 1.85:1 transfer, The Savages works with a few color schemes that intentionally isolate the lead characters. Jenkins often opts for a cold, green (almost hospital-like) tone, while other scenes are bathed in shades of brown. In both, there's softness to the picture, which opts for darkness over detail. When we do get bright bursts of color, they are often contrasted with a bright white. The images frequently reminded me of an old photograph where the colors were a little out of whack, but it's clear that's the exact intent of the film--it's lovingly lonely, just like it's supposed to look and feel. You get mild grain in some scenes.

Audio:
The audio track--provided in 5.1 and Spanish Surround options--suits this script-driven film perfectly. Nothing dynamic, but with mostly dialogue and an intentionally subdued soundtrack, you can't complain. Everything was clear and crisp, with the few rear sounds gentle enough to add to the overall effect without distracting you. English, Spanish and French subtitles are also available. 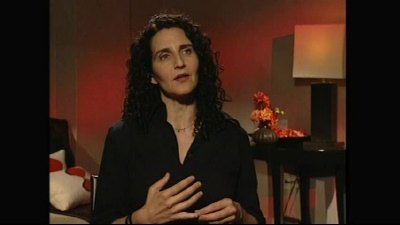 The main extra here is "About the Savages" (20:17), a group of interviews with the cast and filmmakers. The three leads offer their thoughts on the movie, while Jenkins shares her inspiration for the piece, her writing process and casting. Her shunning of force-fed comedy ("comedy with a capital 'C'") is refreshing, and she points out that she goes for more observational humor, or as producer Ted Hope notes, she's great at finding "funny sadness" and "sad funnyness," and finding the humor in things that aren't obvious. Executive producer (and Jenkins' husband) Jim Taylor also contributes. It's a short but sweet piece, and Jenkins provides some great insights.

Two brief extended scenes (one of the opening dance routine, one of the Best Western lounge singers) are included, along with a gallery of Jenkins' personal photos from the making of the film and five trailers.

Final Thoughts:
This rare, realistic blending of drama and comedy is a revelation. Led by amazing performances from Laura Linney and Philip Seymour Hoffman as siblings trying to help take care of their estranged father, The Savages is written and directed with perfection by Tamara Jenkins. She will make you laugh and cry at the same time--and do it frequently. More importantly, the Savages grow...and so will you. Do yourself a favor and see this movie. Highly Recommended. 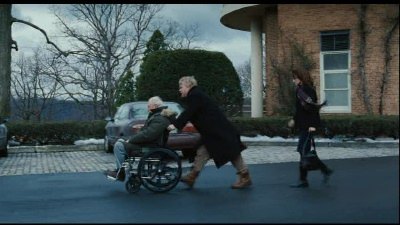