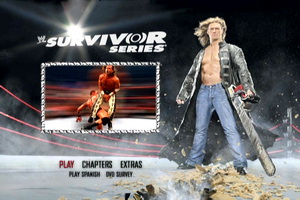 If one were to stop and think about it, Survivor Series used to be like one long PPV filled with tag matches. Sure, the participants might not be "legit" tag teams, but watching these different wrestlers put their differences aside and work together toward a common goal. In the good 'ol days, the Survivor Series PPVs featured some great 4-on-4/5-on-5 matches. Heck, even 2006's Series had more than one 5-on-5 matches. Then again, 2005 only had one match, so maybe it's an "every-other-year" thing?

Survivor Series 2007 took place at the AmericanAirlines Arena in Miami, Florida on November 18, 2007 and lasted 2 hrs and 47 mins long. Here's the card: 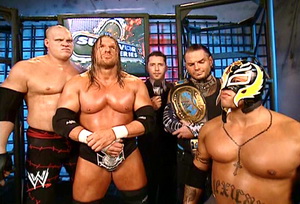 Video: Survivor Series' picture was colorful and vibrant and presented in the WWE's standard full frame 1.33:1 ratio. However, it still suffers from the occasional (usual) severe macro-blocking whenever pyro is used.

Audio: The Dolby Digital 5.1 was clear and enveloping - with JR, Lawler, Cole, Coach, Tazz and Styles primarily in the center channel, various crowd noise in the left and right fronts and some slight ambience in the rears.

Conclusion: Even though I wish there were more 5-on-5 matches, when it comes down to it, i'd have to say that I enjoyed this Survivor Series. Well, except for the tag team match. Recommended.