The Movie
After seeing Because I Said So, I vowed to never again harbor such ill feeling for a Diane Keaton character. She's just so darn likable all the time, which is usually enough to make even her lesser films enjoyable enough. But the writers of Mad Money have made it real difficult for me. And while I wouldn't say the role of Bridget Cardigan (a character as materialistic as it sounds) quite surpasses the Keaton character low set in her 2007 stinker, it comes awfully close.

Mad Money is a light-hearted women's heist film, but it ultimately goes nowhere. This is an utterly empty, instantly forgettable experience. You know from the first scene that they get caught, so there's zero suspense--making the last 40 minutes a chore to sit through, taking a long time to arrive at a boring conclusion you know is coming. And there's also zero sense of consequence for any of the characters: You know they're never going to be in serious trouble, given the comical characterizations of the "bad guys" and the movie's tone.

The biggest hurdle this film can't clear is creating enough sympathy for its protagonists. We need to root and care for them, but I couldn't. That's mainly because of Bridget, a well-to-do Kansas City housewife who suddenly goes into panic mode when husband Don (Ted Danson) tells her he's out of work--and that they are $286,000 in debt. Because she can't bear to stop spending so much, she takes a job as a janitor at a Federal Reserve Bank and quickly hatches a plan to steal the worn-out currency that gets destroyed anyway.

She enlists single-mom Nina Brewster (Queen Latifah), who works at the shredder; and currency cart transporter Jackie Truman (Katie Holmes), a free spirit who listens to loud music and likes to dance while walking--pretty much the extent of her character development. As the story progresses, they eventually involve the men in their lives, including Jackie's husband Bob (Adam Rothenberg) and security guard Barry (Roger R. Cross), who has a crush on Nina.

Bridget comes across as a self-centered spendthrift who cares about nothing more than her own pleasure (while looking at her notes on the bank's cash movement chronology, a "Need a getaway vacation?" ad rests on Bridget's computer. That is her motivation?!). She treats her maid like crap, she dangles the prospect of a better education for Nina's kids to snare the mom into the plan--and later feigns interest in Nina's love life to help the antics continue. And when all signs repeatedly point to quitting while they're ahead, Bridget presses on out of pure greed. She doesn't actually care for her cohorts. Advises hesitant husband Don, who wants it to stop amid their newfound wealth: "We could survive being upper-middle class for a while"--a line that had me rolling my eyes (how relatable!).

There's a sequence in this film where it lost me for good, when all my hopes--and two of the film's props--went down the drain. The scenes showed signs of immense stupidity that made me want to see the women behind bars. Despite warnings to not spend too much, Bridget buys a $62,000 ring--and wears it to work under her rubber janitor gloves, drawing the ire of Nina, who flushes it down the toilet. Then Bridget carelessly throws Nina a package with one of the caper's crucial lock keys--which falls down the sink, setting in motion what is supposed to be the film's most "suspenseful" sequence.

All of this might be tempered if the film was funny. It's not. The plot, like the characters, is based on stereotypes. We get a few shrill bathroom stall meetings, lots of screaming, Bridget challenging Barry's masculinity in order to get her way, repeated references to Nina's 7-year sexless streak, and some clichéd racial humor: Nina jokes about paying for tuition with crack, and Bridget's visit to a black neighborhood is marked by a shout-out from a car full of men ("What up, Miss Daisy?").

Queen Latifah comes across as the most relatable of the bunch--she has a small voice of reason, and at least some purpose for committing the crime. But it's not nearly enough to save the film. Jackie is so thinly drawn that Holmes has to resort to airhead behavior and kooky physical tics to try and stand out--all we really know about her is that she has diabetes. That's it. (Aww...let's feel sorry for her!) There's no real sense of true camaraderie with these three women.

This film is certainly made well: director Calie Khouri (this is her second feature film, following Divine Secrets of the Ya-Ya Sisterhood) is more than competent, and it looks nice (I loved the closing credit sequence, and not just because the movie was over), but that's about it. I don't have any problem with the implausibility of the plot; that's the least of this movie's problems. I'm not sure what point it's trying to make--maybe that most bank workers are just one suggestion away from stealing? The script is peppered with "important" statements on money and greed ("crime is contagious", "we're a consumer society", "money can't buy happiness, but it sure as hell can buy everything else", blah, blah...), but does absolutely nothing with those themes. Cheering for the criminals just because they're women isn't enough to invest your interest, and that seems to be the film's fallback.

Video:
You have two options: a full-frame presentation, or an anamorphic 2.35:1 transfer. This is a strong overall effort: some of the scenes have vibrant colors and detail, although others are much softer--I could have done without the scenes with a bright light (especially the ones at Bridget's desk), which drowned out part of the picture.

Audio:
You can opt for Dolby 5.1 or 2.0 surround. The 5.1 track is solid, and rightfully not too intense (I dug some of the money machine sounds). All of the dialogue was clear. 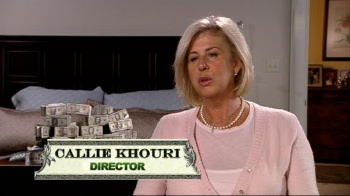 Director Callie Khouri provides a feature-length audio commentary. It's a decent enough track--she talks about the source of the story (Hot Money, a British TV film based on a true story), working with the actresses and her (appreciated) intention to keep violence out of the story. She also admits "how out of proportion" things get by the middle of the film, which I agree with--but not in a good way. Khouri also discusses some of her editorial decisions, like the inclusion of "Money (That's What I Want)", the hit song from Barrett Strong: "I thought it worked beautifully here," she says of the bedroom scene where the gals fling money in the air (I disagree, thinking it was a tad too obvious, but at least we never get "For The Love Of Money" by the O'Jays). She notes how timely the story is with the financial struggles people are going through during the housing crisis, but I don't see much connection with that to the heart of the story's plot.

There's also "Makin' Money: Behind the Scenes of Mad Money" (8:34), which has brief interviews with Khouri and the cast. It's your standard PR fluff with everyone complimenting each other, and doesn't provide anything memorable. Some of the participants comment on themes that sound nice, but really weren't explored in the film, like the joy of "screwing the system", and the American Dream slipping away.

You also get the films theatrical trailer, and trailers of other Anchor Bay releases.

Final Thoughts:
Well made but ultimately empty, this light-hearted heist comedy is instantly forgettable. There's no tension and no laughs, but the movie's biggest fault is its failure to make you want to root for its protagonists. Skip It.