H.P. Lovecraft Collection, Vol. 3: Out of Mind, The

Lurker Films has re-issued the first four volumes of the H. P. Lovecraft Collection, a series of DVDs that contain both feature-length and shorter works both inspired by and adapted from the writing of the father of modern horror-fiction. Volume Three, Out of Mind, contains a nice mix of films though it is the weakest installment of the series so far. While none of these films are bad, most of them aren't as inspired as the works of previous editions. Even so, the disc contains two hours worth of interesting movies that are worth watching.

It would be easy to write off H. P. Lovecraft as an over-rated hack. After all, his plots are very simple more often than not, there's frequently little in the way of character development, and his prose is turgid and opaque. Indeed critics have raised all those points and more (especially the way he labels a creature as indescribably horrific only to describe it two pages later) but these people miss the point. Lovecraft's strength, and the reason he's remembered today when so many of his contemporaries are forgotten, is in his unique ability to create a horrific atmosphere and a pervading sense of unease. No other writer has been able to consistently generate a feeling of foreboding and discomfort the way Lovecraft can. He's the father of modern horror fiction, and has influenced such diverse writers as Stephen King and Batman scribe Denny O'Neil (who named Gotham's Arkham Asylum after the fictions city of Arkham Massachusetts which appears in Lovecraft's fiction.

Because of his prose style and the way he leaves much of the horror to the readers imagination, Lovecraft's stories are innately difficult, some would say impossible, to accurately adapt to other mediums, especially a visual one like film. This hasn't stopped many people from trying, and the results have been more often than not unsatisfactory, at least as far as the feature films are concerned.

Lurker Films has now released a series of discs containing adaptations of Lovecraft-inspired movies that do capture the horror master's style and atmosphere on film. Known as The Lovecraft Collection, each of these discs offers some interesting takes on Lovecraft's stories.

Out of Mind (56 minutes): Intertwining a biography of Lovecraft with a story the of an unsuccessful artist who inherits the Necronomicon, this is an interesting film that unexpectedly succeeds in a lot of ways. Starting with a "vintage" filmed interview with Lovecraft (played amazingly by Christopher Heyerdahl who quotes from Lovecraft's stories and letters) the movie establishes the writer's personality and beliefs before launching into the narrative itself. 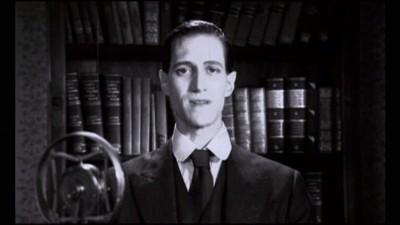 The plot concerns a young struggling artist, Randolph Carter, who unexpectedly discovers that he's inherited a box from a distant relative he's never even heard of. The box contains a picture of the relative, who bears a remarkable resemblance to Carter himself, a letter written in strange symbols addressed to a professor at a Miskatonic University, and a copy of a very old book: The Necronomicon. Reading the latin inscription on the back of the picture, Carter apparently travels back in time to when his relative was a young man, and meets a man who is studying the black arts. Told through flashbacks and dreams, the man becomes convinced that his dead relative is trying to cast a spell on him from beyond the grave, one that will allow him to take over Carter's body.

As I mentioned, there are several things that work very well in this film. Heyerdahl's portrayal of Lovecraft is uncanny and amazing. These intercut scenes work well and help set the tone, and the conclusion where Carter and Lovecraft actually meet is a highlight of the story. The bizarre creatures that pop up in the film are also very good, an the director wisely shows them only in glimpses, or not at all. And while the plot reveals itself to the viewers before the main character figures things out, the story is unique and engaging enough to keep people interested.

There are a couple of pitfalls however. First and foremost, I'm not sure how much this movie would appeal to someone who wasn't already a Lovecraft fan. A lot of the enjoyment I got out of the film was picking out Lovecraft references, including the name of the main character (when writing himself into a story, Lovecraft always gave his alter-ego the name Randolph Carter) and the person whose tomb is robbed at the end ("Howard Phillips" Lovecraft's first and middle names.) I'm not sure how well non-Lovecraft would enjoy the story if they missed all of the in-jokes. There were a few too many scenes that ended with the main character waking up from a dream, which go old quickly, and the scene Lovecraft is walking through a forest trying to pronounce Cthuhlu is just dumb. Even with these defects however, the movie is interesting and fun and well worth watching.

A/V: I was under-whelmed by the anamorphic 1.66:1 picture quality of this feature. There were a lot of digital artifacts that marred the image, mosquito noise was prevalent, posterization was common, and there was some significant aliasing. Small objects in the background are very soft and filled with encoding errors. It's actually not as bad as it sounds. It certainly looks like a professional production, it's just not overly impressive.

The Outsider (6 minutes): When watching Aaron Vanek's adaptation of this Lovecraft story one word comes to mind: Amateurish. I don't mean that as an insult, more that this film represents someone learning their craft, rather than an accomplished professional. From the sound levels and lighting to the acting, cinematography and direction this came across as a project that was just a bit beyond Vanek's abilities. The one area where the film excels is in the make-up department. The creature at the end was magnificent. Not a bad story, but it's hard to suspend one's disbelief. 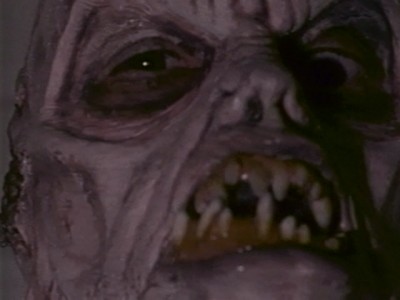 A/V: The sound effects were mixed too high in parts obscuring the narration, and the full frame image was about average. (One note: when shooting day for night, make sure you don't include the sky in the frame....it's a dead giveaway.) There are optional subtitles.

My Necromonicon (less than 2 minutes): A very short piece about a man who obtains a copy of Abdul Alhazred's book. This silent black and white short was made by the same man who directed The Outsider (Aaron Vanek) with unused film from that project. It didn't leave much of an impression.

The Music of Erich Zann (16 minutes): This is a good example of why Lovecraft's stories are so hard to bring to the screen. This particular tale involves music, the only Lovecraft story that I recall where music plays a big part. A young man (named Charles Dexter Ward in the film though a quick glance confirms that he's never given a name in the story) takes a room in a boarding house and every night he hears odd but compelling music coming from the room upstairs. One evening he meets the old man who is responsible for the strange violin music and asks if he can sit in on a practice session. Reluctantly the bizarre, mute man agrees, and the two become friends. Zann is hiding a secret however, and there's a reason for his nightly concerts. 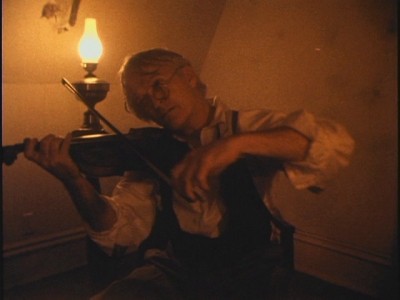 While the film does an adequate job with most of the story, the ending is a real let-down. Visually it lacked impact and it didn't do a great job of tying up the story. Musically the short fails also. The music that is heard in the piece isn't all the odd or bizarre, and because of that it's hard to understand why Ward is so fixated on it. Not the greatest adaptation of a Lovecraft story.

A/V: The full frame image was grainy and there were a few print defects, a couple of spots here and there. Digitally there was a little aliasing too. The disc offers viewers an option of a DD stereo track, a DD5.1 track, or the original audio, which was also in stereo. The original had more sound effects but they became intrusive and overwhelming in places. The other two tracks were fine, and I enjoyed the 5.1 track the most especially during the conclusion.

There were also trailers for The Call of Cthulhu (reviewed here) and The Unnamable.

This disc also has the third part of an interview with Lovecraft scholar S. T. Joshi that lastsabout 16 minutes. This time around Joshi talks about Lovecraft's prolific letter writing as well as the origin of the Music of Erich Zann. Joshi is a bit pompous at times but he does know a lot about Lovecraft.

The only other video bonus is an 11-minute interview with the cast and crew of the movie The Music of Erich Zann. They talk about the usual things, the genesis of the project, the problems with the adaptation, and the shooting itself. It's a bit more on the technical side; there is a discussion about the film stock that was used and the lighting. Not the most exciting set of interviews but worth watching if you're interested in the nuts and bolts of filming.

There is also a commentary by director Aaron Vanek on The Outsider. A bit technical at times, but not a bad commentary.

The disc also comes with a nice 8-page booklet that includes essays on all the films.

While this wasn't my favorite volume in the H. P. Lovecraft Collection, I did have a good time screening these films. The feature film is certainly interesting and the other presentations are worth watching. The Joshi interviews have been nice supplements to the discs, and this one is no exception. When all is said and done this is a weaker disc, but still worth picking up. Recommended.