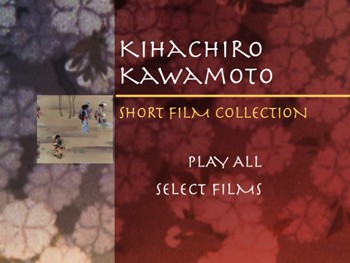 Kihachiro Kawamoto is an innovative Japanese animator who studied stop-motion filmmaking at the legendary Kratky Studios in Czechoslovakia before returning to his native country and developing his own unique style of cartoon. This new collection, The Exquisite Short Films of Kihachiro Kawamoto, brings together seven of the director's miniatures on one disc. Made between 1968 and 1979, they show his facility with different artistic methods and his various narrative passions.

The most distinctive of the animator's styles would have to be his adaptations of traditional Japanese stories and Buddhist folklore using puppets modeled on Noh and Kabuki theatre. In movies like "The Breaking of Branches is Forbidden," "The Demon," and "Dojoji Temple," Kawamoto uses puppets whose frozen yet expressive faces are reminiscent of the masks of traditional Japanese drama. The tales range from the humorous account of two pranksters tricking a young acolyte into getting drunk and letting them into the temple he is guarding ("Branches") to the spookier, mystical stories of strange creatures and their otherworldly needs ("Demon," "Dojoji Temple"). The best of the lot is "House of Flames," a romantic ghost story that crosses the boundaries of life and death.

In these four, the puppets are combined with simplistic backdrops, often painted like stage scenery, to create a scaled-back yet evocative look that manages to capture both the mystery and the passion of Kawamoto's chosen stories. The puppetry is always up front so that the audience never forgets it is watching animation, but that seems to be Kawamoto's intention, striving to create a world that we simultaneously recognize as strangely familiar while still being different than our own.

Another style that Kawamoto uses is more of a hybrid between traditional drawn animation and stop motion, using cut-outs and collage to achieve a look that could be described as "moving storybooks." The two films in this school, "The Trip" and "A Poet's Life," are more modern and also more surreal than the puppet animation. "The Trip," framed by Chris Marker-like photo sequences, follows a young Japanese woman on her vacation to another land, where she encounters a stream-of-consciousness ebb and flow between art, life, and the spiritual realm. Slightly more grounded is "A Poet's Life," a grim look at the effects of modern industry on its workers and the travails of the individual. Based on a story by novelist Kobo Abe (The Face of Another), the film is designed with a consistent brown pallor, with other colors only coming into play when in service of a greater emotional effect. Like many of Kawamoto's shorts (including "The Demon"), "A Poet's Life" is also designed like a silent film, with the only audio being music and sound effects, and the dialogue shown as interstitial title cards.

The one oddball in the collection is "An Anthropo-Cynical Farce," a 1970 cartoon that Kawamoto made in France. (Or so it would appear, since the audio is in French.) Using a combination of the puppet style and the cut-out method, it details a day at the dog track when the races are interrupted by a strange ringmaster who attempts to challenge the audience and their views of what they are watching, only to have the management crack the whip. The marriage of the two approaches is effective, giving "An Anthropo-Cynical Farce" a foreign air befitting its origins. ("Dojoji Temple" also employs old-school hand-drawn animation to create an ocean for the puppets to swim through, and "House of Flame" does the same for both liquid and fire.)

The animation on this disc truly is exquisite, the title doesn't lie. Though the stories themselves are somewhat esoteric and at times a little difficult, there is always something on the screen that will keep you from looking away. 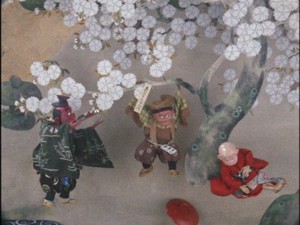 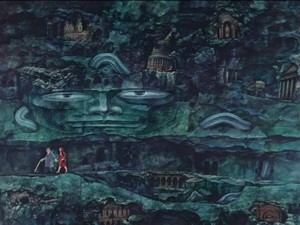 
All of the cartoons on The Exquisite Short Films of Kihachiro Kawamoto are in full frame. The print quality is mostly clean, with the most obvious wear and tear being the slight surface noise on the oldest film, "The Breaking of Branches is Forbidden." (There is some dirt on the other films, as well, but that's the most noticeable one.) Having not seen these shorts before, it's hard to judge the color quality, but I would say that the color on most of the cartoons looks like it has been degraded a notch or two. They look a tad faded, and I can't help but wonder if they weren't intended to pop a little more.

Sound:
A very basic Dolby audio mix is clear and without problems. None of the cartoons have complicated audio set-ups, so it works with just a standard mix. All of the films except for the French "An Anthropo-Cynical Farce" are in Japanese with optional English subtitles, with the dialogue also often being shown as text. The subtitles are well-written and easy to read.

Extras:
None to speak of. Some background on Kihachiro Kawamoto would have been nice, but nada.

The seven films can be chosen individually or played as one continuous program.

FINAL THOUGHTS:
Recommended. The Exquisite Short Films of Kihachiro Kawamoto represents a decade of work from a stylish and distinctive Japanese stop-motion animator. The tales here range from traditional folklore to more surreal ruminations on the modern condition, and the animation has a variety of looks that incorporates puppet theatre and cut-out drawings. The seven films are often strange and haunting, and they are always interesting to look at. A new discovery for me, and I'd like to see more. 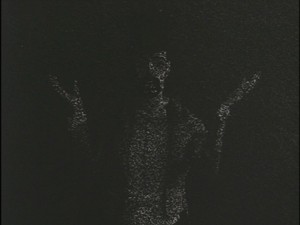 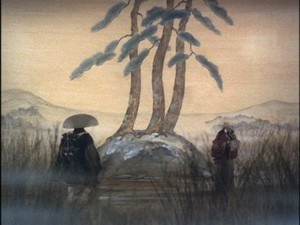