One of the most popular and longest running anime series (currently at over 350 episodes, based on a long-running manga series) finally gets an uncut and unedited release, thanks to FUNimation. Now otaku can watch One Piece the way it was meant to be seen in One Piece: Season One First Voyage. Unfortunately this isn't the entire first season, only the initial 13 episodes. While it would have been nice to get a larger chunk of the show, this two-disc release is still great. Just a down-right fun show, it is well worth picking up. 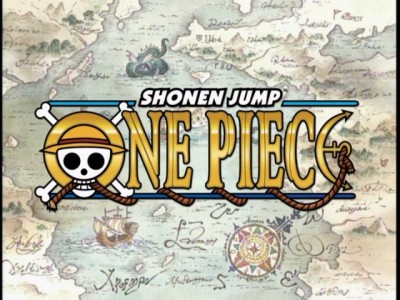 When Gold Roger, the King of the Pirates was executed, he used his last words to tell the world that he had hidden all of his treasure: "You want it, you can have it. Find it! I left everything the world has to offer there!" This started the Great Pirate Era: the seas are filled with men looking for adventure, riches, and most of all Gold Roger's treasure: the One Piece.

Of the many looking for the One Piece, few are as unlikely to find it as Monkey D. Luffy. This young boy has vowed to become King of the Pirates, but he doesn't have a ship, or even a crew. He sets off to sea in a barrel, and it is only by luck that he's taken aboard a pirate ship.

While Luffy may have none of the skills that a pirate would need, like how to navigate on water (or dry land for that matter) he does have a powerful advantage: he's eaten a Gum-Gum Devil Fruit. This magical object has turned his body to rubber. Not only does this make him invulnerable to bullets and most physical attacks, but he can stretch his arms great lengths and use his first as powerful weapons or turn himself into a human slingshot and launch his body through the air. Along with his unwavering resolve to succeed, this makes him a formidable opponent. 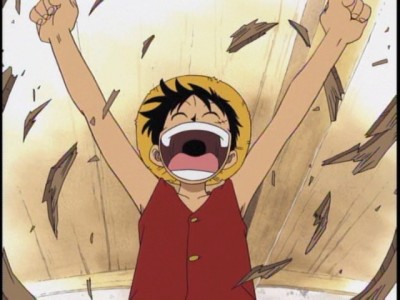 This first set of shows basically involves Luffy getting his crew together along with cleaning the floor with a couple of mean pirates (and an evil naval officer.) The first person he recruits is Zoro (translated as Zolo in the manga) a pirate-hunter who wants to become known as the best swordsman in the world. He also manages to convince an attractive thief, Nami, to become his navigator, and as this set ends has just met Usopp, a youth who's good with a slingshot (and telling tall tales) who has dreams of becoming a great pirate also.

This is just a fun and enjoyable show. It's based on a long running manga that appears in Shonen Jump, and as such it's aimed at young boys. There are lots of fights and plenty of action. What makes this show better than several other Shonen Jump-based anime is that this one doesn't take itself seriously at all. With tongue planted firmly in cheek, Luffy and his friends walk through a strange and unusual world that's almost comical. With clown pirates, quaffed poodle-like sea serpents, and lion-maned animal trainers the visuals let viewers know that the series is just out to have a good time and isn't worried about little things like believability or the rules of physics. A good example of the show's sense of humor is swordsman Zoro (aside from the fact it's pretty gutsy to name a character after the California hero.) He uses the Sant?ry? three sword style of fighting holding the third sword in his teeth and using it with deadly accuracy. Hilarious! 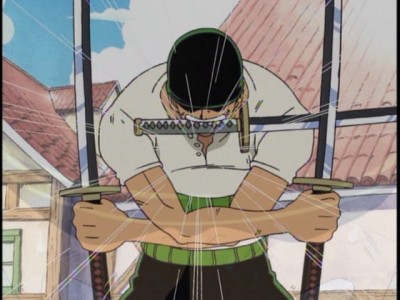 Luffy's character is also enjoyable. He seems dim-witted most of the time, not minding if people insult or attack him, as long as they don't touch his straw hat, his most cherished possession. As with many comical anime characters he eats a lot, and loves to sleep, but when he does get riled up there's nothing that will stop him.

I've been following the English translations of the manga, and this show follows them pretty closely. The start a few chapters in and then fill in the beginning as a flash back, but that's just to start the show off with a bang instead of a sedate origin story. The main difference between the comic and TV show is that the battles pass much, much more quickly in the anime. Fights that would take several weekly chapters of the manga to resolve are over in minutes here, which isn't such a bad thing. While I enjoy Dragon Ball Z, the fights in that show mirror the manga more closely, and I'll be the first to admit that they drag on a bit too long. This show does it better, giving viewers all the action and excitement of the battle, but condensing it to a more manageable size. 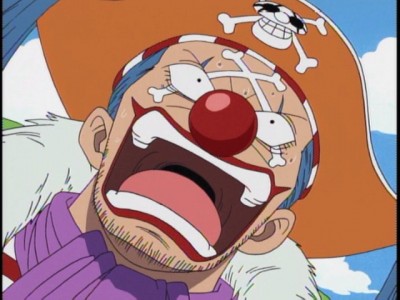 It should also be noted that this is the uncut version of the show. Though it is aimed at kids, there is some swearing. People called "ass" and "son of a bitch", but nothing worse than that. People do get killed too, and when blood is spilled it's red. The show isn't very bloody though, and I had no problems letting my 6th grader watch it.

This set offers the original Japanese track in stereo as well as an English dub in either stereo or 5.1. While the 5.1 dub was nice during the battle scenes, I preferred the original language track. The voices just seemed to fit characters better and made for a more enjoyable viewing experience. The English voice actors did do a good job however and people who like watching in English shouldn't be disappointed.

The full frame video looked pretty good overall. The colors were bright and solid and the blacks were nice and inky. The image was generally sharp too. The only real problem was a more than average amount of aliasing. Diagonal lines are often jagged and when the camera pans across a scene, fine lines tend to shimmer a bit. There's also a bit of cross colorization, but it wasn't distracting.

I was a little disappointed that the bonus items were so meager. There's a "Marathon Play" option, which lets you watch the show without the opening and closing credits, which is really cool. I wish more anime would offer something like this. The only other extra is a commentary to the first episode with ADR Director Mike McFarland, Colleen Clinkenbeard (Luffy), and Christopher Sabat (Zoro). They really don't talk about the episode very much, instead they discuss their characters and how they approached them, how much fun the show is, and the usual anime commentary stuff. This really doesn't give viewers much information about the show itself.

A funny, irreverent, and exciting show, it's great to finally get to see this show in its uncut form. With a lot of adventure and action, this show never takes itself seriously and that's what makes it so enjoyable. While there aren't many laugh-out-loud sections, the whole attitude of the show will have you smiling all the way through. Highly Recommended.