Those Daring Young Men in Their Jaunty Jalopies (Monte Carlo - or Bust!)

Paramount // G // June 3, 2008
List Price: $14.95 [Buy now and save at Amazon]
Review by Stuart Galbraith IV | posted June 18, 2008 | E-mail the Author
This mostly forgotten all-star Euro-comedy is technically a sequel to the very popular 70mm roadshow Those Magnificent Men in Their Flying Machines (or How I Flew from London to Paris in 25 Hours 11 Minutes) (1965). The connection between it and Those Daring Young Men in Their Jaunty Jalopies (1969) is slight but it's there. The earlier movie earned about $30 million in worldwide rentals (on a not-huge budget of about $5.6 million) making it a substantial success when it was new, and it remains a popular catalog title for 20th Century-Fox. Yet many of that film's fans are unaware of Jaunty Jalopies' existence and Paramount, which owns the rights, has so little interest in the film that they sublicensed it for DVD release to Legend Films.*

Essentially the same people made both films: director and co-writer Ken Annakin, screenwriter Jack Davies, composer Ron Goodwin, title designer Ronald Searle, and at least five of the actors. The difference is that Magnificent Men is a good movie and Jaunty Jalopies is not. Why that's so is difficult to pinpoint, but the end result is pretty clear: the first film was charming and amusing (rather than laugh-out-loud funny) and involving, though it doesn't hold up so well to multiple viewings. Jaunty Jalopies is broader, frenetic and forced with strikingly nonexistent characterizations, despite a padded 124-minute running time.

Confusingly, the film is also known as Monte Carlo - or Bust!. Some sources, like the IMDb, claim this to be the original release title but theatrical release posters bearing this moniker seem extremely rare; in most of the world distributors seemed to prefer the one obviously alluding to the earlier success. Further, the film was radically cut by upwards of half an hour for release in the U.S., but Legend Films' 16:9 enhanced DVD is the complete 124-minute version, plus it's in directional stereophonic sound. 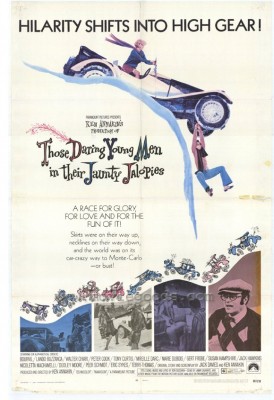 Where Magnificent Men carefully set up its early 20th century air race across the English Channel with leisurely character portraits - the race not commencing until shortly before the half-way point in the film (as I recall), the nearly plotless Those Daring Young Men in Their Jaunty Jalopies gets its motorcar race underway very soon after the opening titles. The pointlessly complex race has contestants starting from five points spread across Europe: in Scotland, Portugal, Sweden, Greece, and Sicily, with the surviving drivers to all converge on Monte Carlo for the Big Finish.

The characters, such as they exist, are variations of the broad national stereotypes found in Magnificent Men: once again Terry-Thomas plays an unscrupulous scoundrel determined to win at all costs, the son of his character from Magnificent Men (this is the only connection with the original film) assisted, as in that film by Eric Sykes; Peter Cook and Dudley Moore are satires of Edwardian Imperialist twits; once again Gert Fröbe plays a Teutonic blowhard, the kind of part he always seemed to play in English-language films after Goldfinger (1964). This time Fröbe is a jailbird transporting stolen jewels on behalf of criminal mastermind Count Levinovitch (Jack Hawkins). This was made around the time Hawkins had permanently lost his voice, and the IMDb claims Robert Rietty dubbed him.

Indeed, just about the entire non-native English-speaking cast sounds dubbed. This was a British-French-Italian co-production so continental actors, stars in their own countries but unknown in America, are wedged into the production in less substantial parts: Lando Buzzanca, Mireille Darc, Nicoletta Machiavelli, etc. Everyone is playing an extreme stereotype (hot-blooded Italian, French sex kitten, etc.), something less than cardboard, rather than anything close to the likeable if slight characters seen in Magnificent Men.

Top-lining the cast by default is Tony Curtis, in a variation of his carefree American driver from Blake Edwards' similar The Great Race (1965). Around this time, Curtis' geniality and playfulness was in most films giving way to what at least played like uncaring flippantness. Curtis may have been trying to convey a likable effortlessness, but instead he comes off like he's walking through the role and high on crank simultaneously, a contrast to the always professional Terry-Thomas and Fröbe, who at least are fun to watch. Adding to this contrast is Curtis' wardrobe, which he may have picked out himself, and anachronistic hairstyle (including very '60s sideburns). Where the others maintain an early 20th century period flavor, Curtis in much of the film is decked out like Liberace on his way to a pep rally.

It just ain't funny; sight gags have no pacing or build-up - they just lay there like an oil slick. This is the kind of film where much of the action is under-cranked, everyone is running around in circles pratfalling enthusiastically, the score is light and bouncy; it's almost like the film is shouting back at its audience, "Whattya mean it's not funny? Of course it's funny!"

No figures are available, but the film looks only slightly less expensive than Magnificent Men, though that was shot in 65mm and this was ordinary Panavision. Over time, it becomes obvious that most of the stars never set foot outside of Dino de Laurentiis' Studios in Rome where most of this was shot. The vast majority of exterior footage with the cars clearly was done with a second unit using doubles for the main actors. The stars appear in insert shots in front of process screens or standing alongside notably fake exterior sets. There's a lot of phony but comical miniature and process effects, but most of it is pretty sub-standard; except for Mario Bava and Carlo Rambaldi, the Italians weren't especially known for their special effects.

I hadn't seen Those Daring Young Men in Their Jaunty Jalopies since I was a kid, when I was hugely disappointed and bored with the film, a just reaction as it turned out. A shame since some of the cast is really trying hard and certain aspects, like Ron Goodwin's score and title tune (enjoyably performed by Jimmy Durante) deserve to accompany a better movie.

As stated earlier, Those Daring Young Men in Their Jaunty Jalopies is a complete 124-minute cut of the film and the DVD is 16:9 enhanced to about 2.35:1 (not 1.78 as stated on the cover). The colors are greenish and muted, but as far as I can recall the film has always looked pretty ugly. Even in the location work, the skies are frequently dark and overcast; it's not the bright sunny film its predecessor was. The good news is that the presentation is in Dolby Digital Stereo with directional dialogue and sound effects, and of course this also great helps Goodwin's fun score. There are no alternate language or subtitle options, and the only Extra Features is a 4:3 letterboxed trailer, probably a carryover from the laserdisc release.

Tellingly, Tony Curtis' character sleeps through the last ten minutes of the film. Fans of these all-star European roadshow-type productions might find Those Daring Young Men in Their Jaunty Jalopies an interesting relic, while undemanding audiences that liked Those Magnificent Men in Their Flying Machines might get just enough entertainment value out of this to justify a rental. All others steer clear. Rent It.

* John McElwee helpfully adds, "[I] wanted to pass along Paramount's domestic rentals figure, which was a weak $959,000. Fox's Magnificent Men ..., on the other hand, took $12.2 million in domestic rentals. Always look forward to reading your reviews." Thanks for writing!