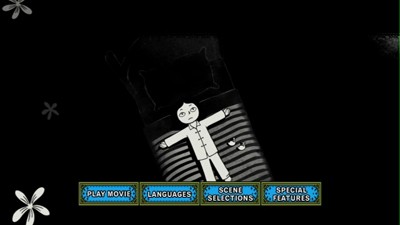 Persepolis was one of the major indie success stories of 2008. Produced in France, it was adapted from two comic book memoirs by Marjane Satrapi, an Iranian immigrant who moved to Europe in her early 20s. Co-directed by the author and Vincent Paronnaud, the black-and-white animated movie successfully took the crude drawings and personal storytelling of the comics and transferred them to the movie screen, making a story that was surprisingly evocative of the books while also being dazzling cinema.

The story of Persepolis is really a story about being stuck between two worlds--between Iran and Europe, personal belief and mandated zealotry, the freedom of childhood and the burden of being an adult, escapist fantasy and harsh reality, the realistic falseness of cartoons and the synthetic realness of memoir. In the only color sequences in the film, the "present day" of the story sees Satrapi (voiced by Chiara Mastroianni) in an airport, trying to decide whether to leave France and return home to Iran after many years in exile. She is stuck by her indecision in a massive construct that is literally everywhere and nowhere. An airport can be a portal to anywhere you want to go, but really, you feel like you're not standing on any particular country's soil.

The narrative the shifts to the late 1970s when Marjane is just a child, unaware of the turmoil her country is heading for. Her heroic uncle (Francois Jerosme) teaches her about the history of Iran and her family, but the little girl would rather see Bruce Lee and Godzilla movies and listen to Iron Maiden than fight a revolution. The Satrapi parents (Simon Abkarian and Catherine Deneuve) are intelligent liberals who want to work toward effecting change, and Marjane's grandmother (Danielle Darrieux) is the voice of wisdom, having seen it all before. Worried that Marjane can't have a life if she stays in Iran, they send her to Austria as a teenager. In one of the most poignant twists in the story, however, the Europeans are just as intolerant and closed-minded as the fundamentalists who are vying for power back home. Wherever you are in the world, people can be small. Judge not lest you be judged.

This excursion rattles the girl, and she returns home for one last try. Here, though, she becomes a woman, having to find her way out of her funk and figure out where she belongs and what she desires. A disastrous marriage and some close calls with religious leaders finally send her away again, never to return. That is, unless she decides to get on that plane.

Persepolis is alive with virtuoso storytelling. While the script is so good, it could have been told in any medium, the choice to animate this feature not only preserves the artistic feel of the comic book, but it provides Satrapi and Paronnaud a visual fluidity they might not have had otherwise. They make the most of the possibilities of animation, showing the world through young Marjane's eyes, bringing her daydreams and nightmares to life, and employing techniques out of Iranian folk art and early classic cartoons. Judgmental old women turn into snake-like creatures, their necks stretching to swirl around Marjane to interrogate her, their black robes filling the entire scene. Grisly visions of war are drawn using bold lines and invasive perspective, like a Russian propaganda poster, while scenes of death are often shown in a distance, framed in an iris, like a dark pageant. These are all methods that could be construed as pretentious or showy in live action, but that feel natural in animation.

That said, the greatest strength of the movie is the same as all of Marjane Satrapi's comics: the humanity of her writing. Drawn or not drawn, Persepolis is a story about people. Sure, a curtain is peeled back and we are allowed a glimpse into a culture and a country that is not our own, but in doing so, Satrapi is showing us how borders don't really make us all that different. We all have the same concerns, fears, and dreams. We may come from two different worlds, but we're still on the same planet. 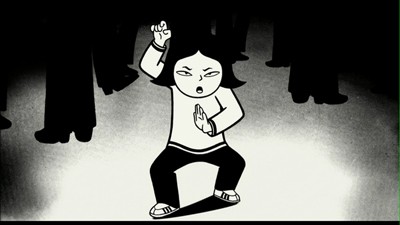 Video:
The transfer quality of the Persepolis DVD is beautiful. Every line of the wonderful artwork is preserved, as are the masterful black-and-white tones. The image is shown at a 1.85:1 aspect ratio, anamorphic, and I didn't see any pixilation or ghosting or any such problems. Perfectly done.

Sound:
There are two language tracks for your choosing, the original French soundtrack and an English dub that was only previously shown in limited release. I saw Persepolis twice during its theatrical run (my original review), so I have a pretty good sense of how perfect the original voice cast was; however, for the purposes of this review, I tried to watch the English version. I made it through about twenty minutes, but something about it was never right. The timbre of the voices, the accents and how they speak, just never click. Many of the background voices and side characters have too Western a personality (read: generic) and for as fine actors as Sean Penn and Gena Rowlands are, they can't replace Abkarian and Darrieux. Both Chiara Mastroianni and Catherine Deneuve provide a bridge of familiarity by reprising their roles as the older Marjane and her mother in English, but the whole thing goes in the crapper as soon as Iggy Pop shows up as Uncle Anouche. His reading is so flat and so distant from the subtlety and nuance of Francois Jerosme, it's like he's a completely different character. Either someone was starstruck, or someone owed Iggy Pop money, because I see no other logical explanation for giving the guy the job.

Beyond the subtleties of casting, both tracks are mixed in 5.1 and both sound great. The audio team makes good use of all the speakers, and they create subtle effects where necessary and go for the bombast when that is called for. Hushed conversations are just as effective as Marjane rocking out to the Maiden when done right.

There are options of standard English, English Closed Captioning, and Spanish subtitles. 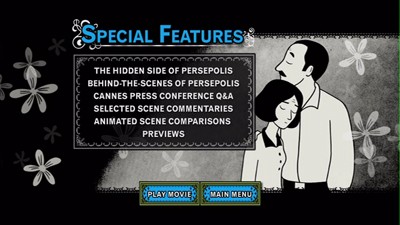 Extras:
"The Hidden Side of Persepolis" is a 30-minute documentary tracing the step-by-step of the production process. It includes lots of production drawings, animatics and other tests, and amusing footage of Satrapi acting out some of the scenes for the animators. Many members of the crew are interviewed, and the two directors talk at length about the work and each other. We also get footage of the recording sessions, along with interviews with Darrieux and Mastroianni. This program is entirely in French, whereas the 8-and-a-half minute "Behind-the-scenes of Persepolis" is in English and is your far more standard DVD promo piece. Gena Rowlands and my buddy Iggy Pop are featured talking about doing the English dub, so this one was clearly created for the U.S. market.

Just under half-an-hour is the press conference for the film at the 2007 Cannes Film Festival, a question-and-answer round table with the film's producers (including Kathleen Kennedy), the directors, Mastroianni, Abkarian, and Deneuve.

The Selected Scene Commentaries feature three specific scenes with individual commentary: Satrapi discussing the color opening and the intention of using this in juxtaposition to the black-and-white; Mastroianni talking about the "Eye of the Tiger" sequence; and Paronnaud talking over the early scenes in Vienna to explain how they wanted it to be different than Iran. Paronnaud speaks in French, while the two women speak in English--though their audio is subtitled anyway and the transcription can't be turned off.

Five Animated Scene Comparisons show storyboard and early animation tests next to the final scenes, featuring commentary by Satrapi (in French with subtitles). Most notable are an extended suicide sequence that was completely removed and a longer version of Marjane's wedding that was cut way down.

Previews for two recent films play ahead of the menu, and then two more and a Blu-Ray commercial can be found with the extra features.

The DVD is in a standard plastic case, wrapped in a cardboard sleeve with a foil finish.

FINAL THOUGHTS:
Highly Recommended. I love, love, love this movie. The story of a young girl coming of age in the midst of turmoil in 1980s Iran, Persepolis is an animation masterpiece and one of the best movies of any kind I saw in 2007. The gorgeous black-and-white cartooning proves the perfect medium for this story of struggle, learning, and compassion, lending the tale a universality that disintegrates all borders. Not as many saw it upon its theatrical release as should have, and so this high-quality DVD package should give everyone a chance to catch up. 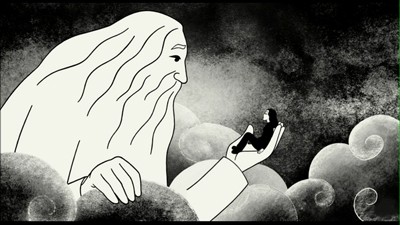 Listen to my own interview with Marjane Satrapi on DVD Talk Radio.