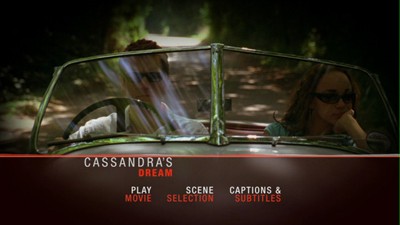 Ian (Ewan McGregor) is a calculating son of a British restaurant owner who is always looking for a little extra and a good investment idea to push him into the world of upper-class finance. His brother Terry (Colin Farrell) is a more physical type, a married auto mechanic with a penchant for drink, pills, and gambling. If he could get one big score, his life would change for the better--be his own boss, buy his wife a house, etc. Both find peace on the fixer-upper boat they share, Cassandra's Dream, a respite from their prospective vices.

This is the set-up of Woody Allen's latest film, named for the boat, Cassandra's Dream. It's the most recent entry in his current London period, a new and fertile ground that has reinvigorated the director's later-life career. Cassandra's Dream is reminiscent of Allen's best film this century, the morality play Match Point. Sometimes too reminiscent, some will say, as the ethical quandaries the movie ponders are almost exactly the same: how far will you go to maintain an illusion that you lead a better life than you do? Theft? Murder?

Terry eventually gets in debt too far after several bad card games, and Ian can't raise the dough for his newest venture, and he's starting to lose his grip on his relationship with the beautiful actress Angela (Hayley Atwell). He's been borrowing fancy cars from his brother's garage and money from his family's restaurant to make her think he's more successful than he is. They both need cash fast to cover their tracks.

And here comes Uncle Howard (Tom Wilkinson, in another of his amazing supporting roles). Howard is the boys' maternal uncle, and the successful man's wealth and largesse have made him a controlling influence in the family. His sister (Clare Higgins) always invokes his name to further emasculate her husband (John Benfield), and the boys don't even see dear ol' dad as a possible problem solver. It's Uncle Howard or nobody. As always, Howard will help, but this time he's charging a price: kill a business associate who is threatening to blow the whistle on some of Howard's less than noble deeds.

Most of Cassandra's Dream is spent analyzing the debate that passes between Terry and Ian, who can't decide whether they can carry through with the job. In a nice twist, the wildchild Farrell is the one less inclined to take action, and it's the opportunistic Ian who is more keen to make the killing. Beyond the basic Ten-Commandments morality of murder, the larger questions the boys must face are of the bonds of family. How far does one go on behalf of one's blood? Ironically, Howard's invocation of familial bonds is also what strains those bonds, pitting brother against brother and easing the story into the realm of Greek tragedy. One bad action will compound on the next, and so many eyes will be taken that everyone will be left blind.

The plot of Cassandra's Dream and its work-a-day visual style have an easy familiarity that, rather than making the movie predictable, makes it easier for Allen to do what he has set out to do. We know where things will go, so we need not worry about how the narrative will resolve itself while the writer/director lifts the flaps on all the little pockets of the story to question what is underneath. There are several metatextual tricks within the script that Allen touches on subtlely, commenting on his own foreshadowing techniques and using the subplot with Angela as a parallel commentary on the themes of the story. Listening to her talk about the play she is starring in, including her own role as an object of erotic tension, is like the larger dramaturgy in miniature form.

All the actors deliver solid performances that serve Cassandra's Dream quite well. Tom Wilkinson captures the most attention, the way he breezes in and out of the film like a flash storm. Colin Farrell also distinguishes himself as the anxiety-prone Terry, his performance vibrating between confident swagger and twitching nerves that match the winning-losing streaks the character rides when he gambles. I also rather enjoyed watching Hayley Atwell wrap Ewan McGregor around her finger and mess about with the accepted clichés of insecure actresses. I look forward to seeing her in more (she has Brideshead Revisited and The Duchess both coming this year).

Even with all this good work, the sad thing about Cassandra's Dream is that it's always just "good enough." Woody Allen sparks the match, but he seems content to hold it over the fuse rather than ever really lighting it up. The same debate that so interests him also keeps the film from taking off, and though the journeyman director has no problem creating a tension-fraught scene of violence, its appearance comes off as cursory, showing up exactly at the moment it's required because, without it, there can be no denouement. Perhaps had Match Point--and before it, Crimes and Misdemeanors--not already serviced many of these same themes, Cassandra's Dream would feel more special. Its final scenes certainly distinguish themselves for their accelerated sturm und drang. It's just that, when it's all summed up, Cassandra's Dream comes off more as a conversation about a movie we've seen before rather than a completely new version. 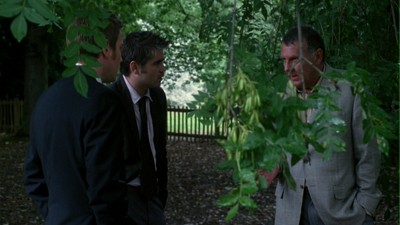 Video/Sound:
The 16:9 transfer is as workmanlike as the movie. Really, all the technical specs for Cassandra's Dream settle for the same "good enough" level as Allen did for everything else. The image looks good, with no glaring faults, and the stereo mix of the English soundtrack manages to present the information clearly without any great effect.

Optional subtitles in Spanish and in English for the deaf and hearing impaired are there for the choosing.

Extras:
None to speak of.

FINAL THOUGHTS:
Despite being about as unexciting a DVD release as has ever been manufactured, and despite a fundamental sense of something lacking in the film itself, Woody Allen's Cassandra's Dream still has enough going for it to be Recommended. There is something in the lack of ostentation and the journeyman storytelling that makes it watchable despite its failings. The plot is all momentum, and it rolls along like a finely designed machine. Filled with strong performances, particularly from Wilkinson, Atwell, and Farrell, and intriguing ethical debates, Cassandra's Dream could even be a grower. If nothing else, expect reliable entertainment for your evening's investment. 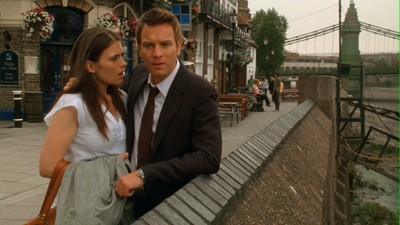