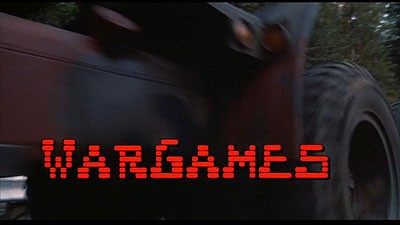 
The Movie
When I was a kid, playing games off audio cassette on a Commodore 64 and doing "Duck and Cover" drills, WarGames was a genuinely frightening film. Today, with the Cold War a distant memory and the widespread use of the Internet, the story's a bit dated, which likely makes it a harder sell to anyone who never hid from a nuclear bomb under their school desk. But for everyone else it's an entertaining and moderately emotional time capsule.

David (Matthew Broderick) is a smart kid, but he's not quite focused at school, which gets him in plenty of trouble. Fortunately for him, his grades don't reflect that, since he can hack into the school computers and change his grades. His online activities aren't limited to academic fraud though, so one day, while showing off to a cute girl from school (Ally Sheedy) he accesses what he thinks is a video-game company, and accidentally sets off a war simulator at a U.S. military base. What's worse is the computer doesn't know it's a simulation, and has access to real missile controls, thanks to efforts to automate the launch process.

David only becomes aware of what he's done when the government tracks him down, thinking he's working for the Soviets. Realizing the military doesn't quite understand what's going on, and feeling responsibility for what he's started, David digs into the system to find how to stop it, setting off a race against the deadline for Armageddon. For what is essentially a popcorn thriller, there's a good deal of time spent on the perils of removing human thought and emotion from the arena of war, and the ethics of artificial intelligence and near-sentient computers. 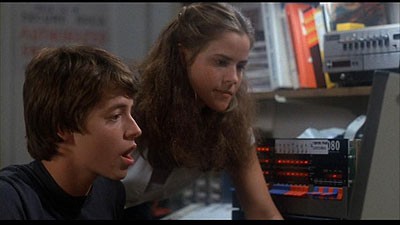 The film, directed by John Badham, is a classic from the '80s era, when editing wasn't obliged to make a cut every three seconds. As a result, the film has the chance to built up a sense of dread between the plot points, including a opening gambit that has no characters or settings from the rest of the film, yet it sets a perfect tone and storyline for everything that follows. Yes, the technology and world politics are antiquated, but the overall concept of man versus machine is universal.

Performing in their first lead roles, Broderick and Sheedy are surprisingly good for their inexperience, though Sheedy mainly gets by for her interaction with Broderick, as she's otherwise relegated to the girlfriend/cheerleader role. Broderick, on the other hand, sets the foundation for a career of intelligent, yet accessible underdogs, as his soft eyes kept the smart-alec personality from overwhelming their heroism. In the end, he makes David more real than your average teen star. The cast is rounded out by an impressive crew of character actors, including Dabney Coleman, playing a computer advocate, Barry Corbin as one of the most memorable generals on film and John Wood's pivotal role.

If nothing else makes this film stand out from the pack, it's "Joshua," the computer at the center of everything. I can't remember the majority of what I did between the ages of 6 to 15, but I can tell you just about every line the robot-like voice of Joshua said in WarGames. Why? Part of it is how iconic those lines are, but there's also the way they are said, the result of a decision by Badham. Taking such innocent, human dialogue and making it sound so alien ultimately makes it strikingly frightening, which is just what this film once was. Now, it's simply good filmmaking. 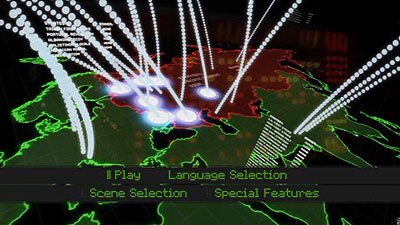 The DVD
A one-disc release, the 25th-Anniversary edition of WarGames is packed in a standard keepcase, and features an excellent animated anamorphic widescreen menu, with options to watch the film, select scenes, adjust languages and check out the special features. Audio options include English Dolby Digital 5.1 and 2.0 tracks, and French and Spanish 1.0 mixes, while subtitles are available in English and Spanish, along with closed captioning.

The Quality
After offering up a letterboxed image last time around, the anamorphic widescreen transfer on this DVD is absolutely beautiful, which is impressive considering its age. The film is brighter and cleaner than the 1998 disc, though skintones and bright reds are more red than previously. With a nice level of detail, you can appreciate all the minor touches in the backgrounds and the quality of the special effects for the time period. The framing is different, and considering some scenes are moved up and some down (intead of some universal adjustment), which more balance to the composition, you'd think it was intentional. The amount of dirt and damage that was evident in the previous release has been dramatically improved, to the point where the transfer looks smooth and clean. There are no obvious issues with digital artifacts either. 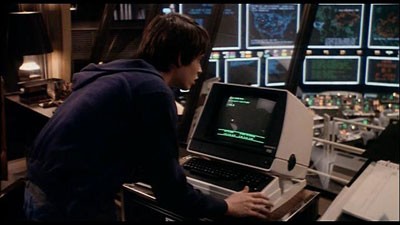 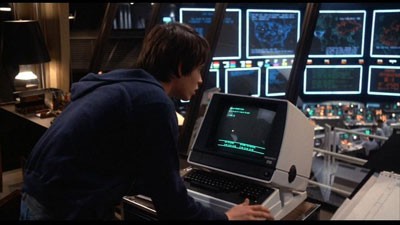 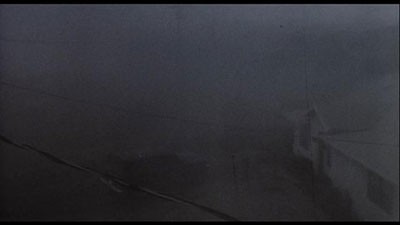 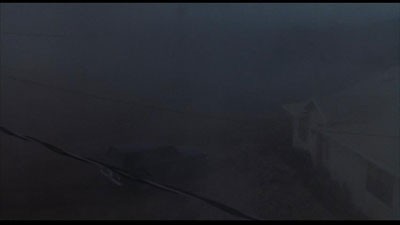 The audio is also an improvement over the previous release, moving from a Dolby Digital 2.0 track to a full 5.1, though you aren't getting a aural blow-out by any stretch of the imagination. WarGames is not exactly an explosive-sounding film, so the majority of the work handed to the side and rear speakers is in the score, which gets some enhancement in the surrounds. Most everything else is right down the middle. Either way, it all sounds solid, with clear dialogue and good sound effects.

The Extras
Carried over from the previous DVD is an audio commentary from Badham and writers Walter Parkes and Lawrence Lasker. It's just the kind of commentary you want when looking back at a film after some time has passed, as they share a lot of info on the making of the film, and chat about the somewhat unusual route the film made from the page to the screen. Unfortunately, a lot of what you get here is repeated elsewhere in the extras, but it's a quality track nonetheless. Also returning is the original theatrical trailer, though this time it's presented in anamorphic widescreen.

There are several new feaurettes included, starting with the 44-minute "Loading WarGames," which features new interviews with Badham, Broderick, Sheedy and Corbin, writers Walter Parkes and Larence Lasker, executive producer Leonard Goldberg, editor Tom Rolf, cinematographer William Fraker, visual effects crew Michael Fink and Geoffrey Kirkland, composer Arthur Rubenstein, critics Owen Glieberman and F.X. Feeney, internet figure Harry Knowles and uncredited screenwriter Tom Mankiewicz. Through interviews supplemented by storyboard drawings and lots of archival photos, the origins of the film are explained, including alternate concepts that didn't make it to the final film, notes from the complex production effort and the situation that led to the replacement of original director Martin Brest, while the . The frankness of the discussion is unique considering how cautious Hollywood people normally are when talking about their brethren. It's just the kind of analysis and reminiscing you'd hope to get for a classic film, and it's presented in an highly entertaining way.

"Attack of the Hackers" spends 13 minutes looking at the film's representation of hackers and its impact insider and outside the hacker community. Among the participants in the interviews are security expert Richard Clarke, Apple co-founder Steve Wozniak, hackers John T. Draper ("Captain Crunch"), Loyd Blankenship ("The Mentor"), Popular Mechanics tech editor Glenn Derene and author Dan Verton. The discussion focus on the accuracy (and inaccuracies) of the technology in the film, the history of connected computing and hacking, and the reasons and ethics behind hacking. For anyone with a basic knowledge of the topic, there's nothing much new here, but for everyone else, it's a well-done overview, with a quality group of experts.

For the 10-minute "Inside NORAD: Cold War Fortress," several featurette participants, including Clarke, Fink, Feeney, Parkes and Broderick, return, joined by a handful of military leaders from the actual NORAD, to discuss the history and workings of the installation, with a brief look inside and at its future. It seems this isn't too recent a creation, as it mentions a possible move to a new facility in 2007, which, considering we are now halfway through 2008, would seem to be something they would be more sure of. Odd.

up next is a four-minute tongue-in-cheek investigation of one of the game at the crux of the film, "Tic Tac Toe: A True Story." This isn't taken seriously at all, which is probably the way to approach the topic, but when sat alongside the rest of the extras here, it seem out of place. Consider, you also get and interactive Superpower Weapons Briefing Gallery, which includes info, pictures and charts of the various large-scale weapons in the possession of the U.S. and Russia. This is a manual gallery, and it has a great opening menu concept taken right from the film.

There's a few bits more includes, like a Sneak Peek (read: trailer) of the Direct-to-Video "sequel" that's released the same day as this DVD, and a downloadable screensaver on the disc. 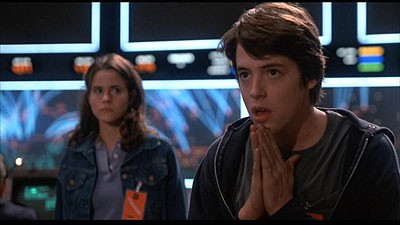 The Bottom Line
A product of its time, WarGames might not hold up for younger viewers to whom the main concepts may be too dated or foreign, but because it's so well-made and is a well-rounded thriller with a brain, it can overcome the changes in the world since it was released. The DVD looks and sounds better than it did in its previous incarnation, and features a wealth of entertaining and enlightening extras that fans will absolutely want to check out. This is an easy call for those wondering if they should upgrade, if only for the higher quality, while the extras seal the deal.