Navarre Corporation Company // Unrated // May 27, 2008
List Price: $12.98 [Buy now and save at Amazon]
Review by Stuart Galbraith IV | posted July 7, 2008 | E-mail the Author
After BCI's very impressive HD DVD releases of four classic - if public domain - Bob Hope comedies, I was perhaps foolishly optimistic thinking The Cult Films of Roger Corman - 10 Movie Set might likewise have sourced original film elements. There's Roger himself grinning away (as always) on the cover suggesting, erroneously as it turns out, he had approved or somehow had been involved with this release. (Nobody at BCI even took the photo; it was licensed from Getty Images.)

The Hope films (Road to Rio, Road to Bali, Son of Paleface, and My Favorite Brunette) had been bargain bin perennials since the dawn of VHS and Betamax. None had looked any better than mediocre on tape, but for HD DVD the BCI label got around this by licensing new high-def masters apparently made by the rights holders in the United Kingdom. These were sourced from Paramount's original negatives, and as a result BCI's HD DVD discs look just great.

Similarly, many of director Roger Corman's early movies (including some that he produced but didn't direct) have been public domain staples for decades. Though some titles have been released through, perhaps, dozens of home video labels over the years, a few like Attack of the Giant Leeches (1960) have never in any of its various incarnations looked better than flat-out awful. 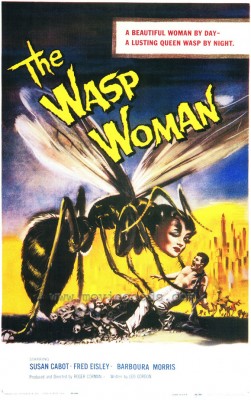 Don't get "stung" by public domain releases like this one.


Unfortunately, The Cult Films of Roger Corman - 10 Movie Set is truly appalling. Crack open the box and inside you'll find five plain-wrap single-layed, double-sided discs in packaging that seem determined to scratch up and dislodge the DVDs on top at the slightest touch. You may find that other discs deeper inside the case require a sturdy set of pliers to remove. Anyway, the set we received was missing Disc 2 (apparently featuring Wasp Woman and Last Woman on Earth) though it did include two Disc 5s (featuring Night of the Blood Beast and Attack of the Giant Leeches). I asked our editor, John Sinnott, to check with BCI about getting a copy of the missing disc but he reported, "The [publicity representative]...says that they don't have any more copies available. You'd think they'd want to make sure the review doesn't say 'My set was screwed up and they couldn't fix it' but I guess that's their call." If they won't fix the problem for us what do you think your chances are? Caveat emptor!

The whole shebang is billed under the "Advantage Collection" moniker, though judging by the quality of the transfers I guess that means BCI has the advantage of having your money. (Brentwood Communications' logo appears on the discs but nowhere on the packaging.) Normally with boxed sets like Fox's The Carmen Miranda Collection, Sony's Icons of Adventure or for that matter MGM's own Roger Corman Collection this reviewer would go into some detail on each film's merits, provide some analysis and put the film into perspective. In this case though the transfers are so awful I really don't want to do anything to incite curiosity; better to wait until good versions of these movies are released. (And it could happen. MGM deserves a lot of credit for releasing Corman's A Bucket of Blood, in an incorrectly full-frame but otherwise pristine transfer - even though the morning that DVD hit store shelves the vultures at myriad PD labels were at their computers replacing their old masters with copies of MGM's version.)

Instead, the plan here is to provide the reader with a quick run-down on the quality of each disc - or, more correctly, the lack thereof.

The ten films in this set - assuming you get them all - are, chronologically: Night of the Blood Beast, She Gods of Shark Reef (both 1958), A Bucket of Blood, Attack of the Giant Leeches, The Wasp Woman (all 1959), Ski Troop Attack, The Little Shop of Horrors, Last Woman on Earth (all 1960), Creature from the Haunted Sea (1961), and The Terror (1963). Most of these films were made independently by Corman's production company, Filmgroup for release through AIP. Reportedly the reason they are in the public domain is because at the time copyright laws stipulated that a record of the film (i.e., a theatrical print) had to be sent to the Library of Congress, and Roger didn't want to waste money when the same print could be out earning money on the drive-in circuit. For Corman, it was a rare moment of short-sightedness.

All the films in this collection, at least the ones we got, are full frame with no alternate audio or subtitles options, nor are they closed-captioned. I didn't sit through everything, watching only a couple of titles all the way through then skimming through the rest. Here's the breakdown:

Night of the Blood Beast: Nth generation dupe with soft focus, poor contrast and crappy sound. Utterly unwatchable thanks to some weird mastering flaw in that result in everyone walking around like bad stop-motion characters, i.e., all movement is jerky and distorted.

She Gods of Shark Reef: Badly framed, with the frame line and part of the frame above it visible some of the time, this transfer's biggest problem is that it's much too hot, as if the entire film was overexposed. Daytime scenes suggest Yucca Flats in the middle of a test blast and everybody glows with atomic radiation.

A Bucket of Blood: Not surprisingly, this is the best-looking film in the set. It should: it certainly appears stolen from MGM's transfer, though here somebody screwed up and there's the edge of a highly distracting horizontal bar at the top of the frame. (BCI denies MGM's transfer was sourced, though in an email to this reviewer they also state they don't know where their outside vendors source their PD titles.)

Attack of the Giant Leeches: This is maybe the worst, rife as it is with awful video distortion, including wrinkles in the source tape. The 16mm print sourced is warped in the center, so that tends to be out of focus while the sides of the frame look a little better. Nighttime scenes are so dark you can hardly tell what's happening onscreen. This may be from the same piss-poor source as "The American Film Museum's" home video travesty released through Elite about eight years ago. (Remember them, "dedicated to preserving our national film heritage?" Ha!) Eleven minutes of sorry-ass looking trailers are included as an extra.

Ski Troop Attack: Nothing to write home about, this utilizes a print dragged through Pine Needle Forest, Mr. Slate's Gravel Pit, and The Razor Blade Exchange. Worse, as with Night of the Blood Beast, people jerkily ski down hills like Davey & Goliath.

The Little Shop of Horrors: Dirt in the film gate, a warped, out-of-focus print source, poor contrast and audio that suggests someone placed a microphone next to the speaker of a 16mm projector running the film in a high school gymnasium.

Creature from the Haunted Sea: This looks almost okay. I had a VHS tape of this for years, and PD DVD. Both were of similar quality. Unlike a lot of these masters, this doesn't play like it's 10 generations removed from its film source. It looks like a decent 16mm print was used; it's got its fair share of scratches and reel change cues, and were it not for the video distortion at the bottom of the frame throughout it would almost be acceptable. Included is the 75-minute TV version, with new scenes shot a few years later to make the film more attractive for TV syndication. Incredibly, at the 59-minute mark the picture goes dead and color bars appear for several seconds. I guess Brentwood's Telecine technician was out getting his Café Latte. The same sorry-ass looking trailers are included as an extra. Betcha couldn't wait to see 'em again.

The Terror: A very soft image and tepid, greenish smeary color mar this release. A shame as I got to see a pristine 35mm print MGM made a few years ago but which they're unable to release to DVD due to rights restrictions.

Wasp Woman and Last Woman on Earth: BCI ran out of those discs, remember? But here's what those extra copies of Night of the Blood Beast and Attack of the Giant Leeches looked like: Night of the Blood Beast Nth generation dupe with soft focus, poor contrast and crappy sound. Utterly unwatchable thanks to some weird mastering flaw in that result in everyone walking around like bad stop-motion characters, i.e., all movement is jerky and distorted. Attack of the Giant Leeches: This is maybe the worst, rife as it is with awful video distortion, including wrinkles in the source tape. The 16mm print sourced is warped in the center, so that tends to be out of focus while the sides of the frame look a little better. Nighttime scenes are so dark you can hardly tell what's happening onscreen. This may be from the same piss-poor source as "The American Film Museum's" home vide travesty. (Remember them, "dedicated to preserving our national film heritage?" Ha!) Eleven minutes of sorry-ass looking trailers are included as an extra. Confused yet?

For your money you get oodles of public domain monster movies trailers available in better shape elsewhere, eleven minutes worth times two.

The sad thing here, of course, is that all of the films in this collection are of considerable interest to Roger Corman and '50s sci-fi/horror fans, those with an interest in low-budget moviemaking, or maybe Corman's black comedies written by Charles Griffith, Bucket of Blood and The Little Shop of Horrors, which have a cult following all their own. Even at a list price of $12.98, or $1.30/movie, that's still too much; except for Bucket of Blood they aren't acceptable even as "reference copies" until something better comes along.

These movies, all of them, deserve a lot better than this.

Perversely, the "Advantage Collection" sub-label has more than a dozen other boxed sets announced for 2008. If The Cult Films of Roger Corman is any indication, film fans are advised to steer well clear. Skip It. Big Time.