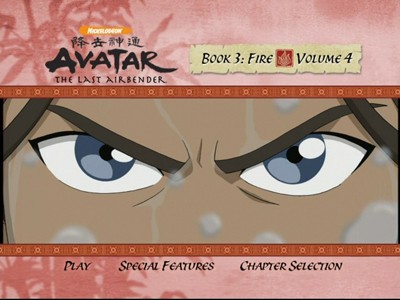 In case you don't know Avatar the Last Airbender's secret title code, Avatar the Last Airbender - Book 3: Fire, Vol. 4 translates as the final entry in the series, a culmination of the ongoing trilogy that has been wowing animation fans on Nickelodeon for the last several years. As such, I want to tread lightly around much of the story. If you've been waiting this long to see how Aang and his amazing friends deal with the ongoing threat of the Fire Nation, the last thing you want to do is read a review of the concluding DVD and have it all spoiled. Then again, if you have made it this far, what do you need me to tell you anyway? Go out and get this disc!

If you haven't watched the show before, Avatar the Last Airbender - Book 3: Fire, Vol. 4 isn't really the place to start either. Rather, let me direct you to my earlier reviews: The Complete Book 1 and The Complete Book 2.

The basic story of Avatar the Last Airbender involves a mythological world where humanity is broken into four tribes based on the four natural elements: air, water, fire, and earth. In each tribe, there are special individuals called Benders, who can manipulate their element through a combination of martial arts and magic. In each generation, there is one Avatar, a master of all four elements. In order to maintain a cosmic balance, each new Avatar is born into a different tribe, so no one element ever dominates. One-hundred years ago, however, the Fire Nation wiped out the Air Tribe before its Avatar could come of age, only they failed to kill twelve-year-old Aang. He spent the next century frozen in an iceberg, and the people of the world spent it without an Avatar and under the thumb of the Firelord. Unthawed, the child goes on a quest to master the elements and free the world of tyranny. Along the way, he forms a small band of freedom fighters, including friends and former enemies.

Book 3: Fire, Vol. 4 has six full episodes, running 148 minutes, giving us one more episode than the standard has been for the earlier DVDs. This includes the four-part finale; before we can get to that, however, we have a few loose ends to tie up in preparation for the big battle. The disc leads with two fantastic single-episode entries.

* Chapter 16: Southern Raiders: Searching for the source of Katara's anger against him, Zuko, the exiled Fire Nation prince, takes the waterbender on a search for the man who killed her mother. Katara learns an important lesson about the emptiness of revenge, and questions regarding the effectiveness of violence are raised that will have an impact on how everyone will handle the action that is coming.

* Chapter 17: The Ember Island Players: While hiding out in the Firelord's abandoned vacation home, Sokka discovers that the nearby town is performing a play that gathers together all of the stories of the children's exploits since freeing Aang from the ice into one sprawling, comic narrative. The kids all go to watch this operatic farce, and they are shocked to see warped versions of themselves on stage. The portrayals, which exaggerate their various traits, make them face their own faults and fears. The show-within-the-show also serves in an Hamlet-like fashion, shedding some perspective on what has been happening while also recapping the series before heading into the final round.

* Chapter 18-21: Sozin's Comet, parts 1-4: This is what we have been waiting for: the final assault on the Fire Nation. As you likely know, Firelord Ozai has been preparing a plot where he harnesses the power of a passing comet, and at this peak of strength, he will unleash his ultimate destruction on those who have not yet bent to his will. The odds are stacked against Aang going in: not only has Katara used up all her healing power, meaning the Avatar has no second chances, but Aang has also begun to doubt war as a solution. His religious and philosophical journey has led him to a place of peace, and he must decide what price is too much to pay to restore order. Oh, and of course there is the question of who Katara really loves, Aang or Zuko.

Needless to say, the final installment of Avatar the Last Airbender maintains the high quality that has made the cartoon series a consistent joy. These last six episodes are full of the same humor, creativity, and high-octane action as we have come to expect from the show, and believe me, it does not disappoint. For all the time viewers have invested in the characters, as well, their development follows the arc that they have been on since the very first episode, and it's amazing to see how much they've grown. As far as finales go, Avatar the Last Airbender - Book 3: Fire, Vol. 4 has the stuff. 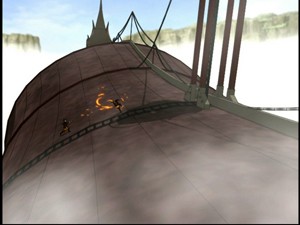 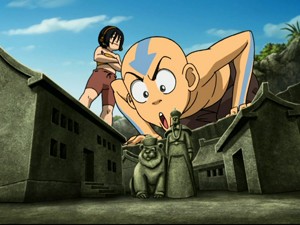 Video:
Avatar the Last Airbender - Book 3: Fire, Vol. 4 keeps the quality of the previous discs, with bright fullscreen transfers that don't suffer from compression or other digital transfer problems. In fact, I'd daresay that this disc looks better than those that preceded it, but that might also be that the animators have pulled out all the stops for the finale. These six shows have some of the most consistent, fluid drawing of the entire series.

Episodes can be played all at once, or chosen one at a time.

Sound:
Only one English soundtrack is available, a fairly effects-heavy and well-balanced Dolby Digital stereo track.

Extras:
The DVD comes with two inserts in the case: a one-sheet giving an episode by episode summary of Book 3: Fire, Vol. 4 on one side and an ad for the rest of the series DVDs on the other, and a six-page comic book that concludes the story being serialized in the comics included in the previous three Book 3 DVDs. The ad on the one-sheet boasts that a complete collection of Book 3 is coming soon, so if you've been holding out for that, never fear.

There are two audio commentaries on the DVD, both featuring show creators Michael DiMartino and Bryan Konietzko. On episode 16, they are joined by voice director Andrea Romano and Dante Basco, the voice of Zuko, and on episode 17, Jack De Sena and Jesse Flower, the voices of Sokka and Toff. These are lively tracks, looking back over the series and giving a focus on the acting. It's too bad, though, that there was no commentary discussing the ending, given that there is also no retrospective documentary to look back over the series. Perhaps they are saving that for the aforementioned boxed set?

Nickelodeon trailers play as the DVD loads, and they can be bypassed using your "next" button.

FINAL THOUGHTS:
We've waited three seasons for Avatar the Last Air Bender - Book 3: Fire, Vol. 4, and the conclusion of this animated adventure trilogy does not disappoint. It's been an impressive series from start to finish, combining martial arts, mythology, humor, and solid characters with top-notch animation to give television one of its best serials. Honestly, I've enjoyed this way more than most of the live-action series that are popular right now. Highly Recommended. 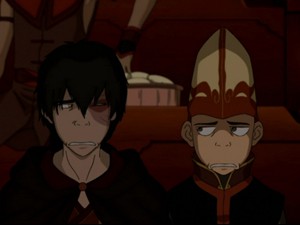 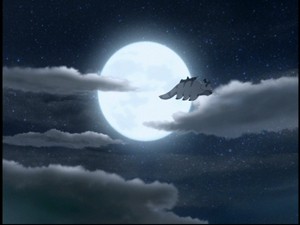