Television Under the Swastika

First Run Features // Unrated // August 19, 2008
List Price: $24.95 [Buy now and save at Amazon]
Review by Stuart Galbraith IV | posted August 6, 2008 | E-mail the Author
Sometimes filmmakers latch onto a subject so unexpected and fascinating that all by itself the raw material inherently is totally engrossing. Such is the case with Television Under the Swastika (1999), an incredible documentary about the medium's development under Nazi Germany from 1935-1944. Subtitled Unseen Footage from the Third Reich it's an amazing, heretofore unknown story well told; stylistically, it reminded me a lot of the wonderful Kevin Brownlow/David Gill documentaries on silent cinema, very high praise indeed. The only thing working against it is its brevity: 52 short minutes. I would have enjoyed something three times as long. 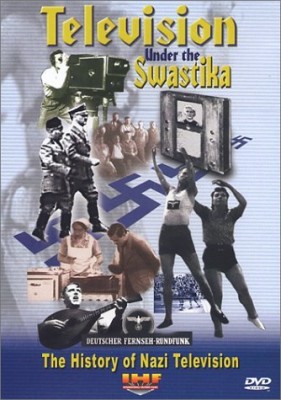 Though documentaries about World War II occasionally make passing, dismissive references at pre-war Germany's flirtation with television technology, writer-director Michael Kloft's film (first released to German television as Das Fernsehen unter dem Haken kreuz) makes clear they produced the first regular television broadcasts anywhere in the world, up to four hours a day. Moreover, technically they were ahead of every other country trying to make television a practical reality and by the late-1930s made enormous technical advances, producing surprisingly good televised images probably comparable to American TV of 10-15 years later.

The documentary includes interviews with a few survivors from that era (including one of the very first television reporters) and fascinating contemporary tours of old TV studios and museums where surviving equipment is preserved, but mostly it relies on footage from the original 1935-44 broadcasts. That's right, original footage.

Though Kinescope-type technology - preserving a live video broadcast on film - hadn't yet been developed, much of what was shown on early German television was shot on 35mm film to enable an endless number of rebroadcasts. Some 285 reels of film survive, and it's the heart of the program. Not surprisingly, the Nazis' early support of television was largely spurred by its potential as a vehicle for its propaganda and their "Strength Through Joy" program, extolling the virtues of Nazism and National Socialism, is the dominant theme of various homemaking shows for German women, hunting and sports programs for men.

Needless to say, it's a little jarring to see such universally-recognizable, generic TV fare as cooking and talk shows open with the hosts greeting guests with a "Heil, Hitler!" but they do. Conversely, much of what passed for entertainment in 1936 is on display, too: in one segment, a scantily-clad woman dressed as a cowgirl does a lasso act to the tune of "All I Do is Dream of You."

The material is endlessly fascinating: there's an interview with German communist-turned-loyal Nazi actor Heinrich George (Metropolis, Berlin Alexanderplatz) and footage of a 1938 boxing match between Max Schmeling and Adolph Heuser. There are also subtle and not-so-subtle shows that references anti-Semitism, including one where German children are shown having their skulls measured and teeth examined in a "race study." One of the last surviving shows is a surreal program you'd think Monty Python had dreamed up, showing amputee soldiers hopping around an obstacle course, in training so they can hurry back to the front lines.

The dissemination of Nazi television was limited, though less so than you'd imagine. Party bigwigs got first-dibs on sets, but television parlors for the general public also became popular. After the war began and propaganda minister Joseph Goebbels lost interest in the medium, the network reinvented itself as a means to entertain wounded soldiers; burlesque-style stage shows were broadcast to military hospitals.

Though the earliest broadcasts delivered an exceptionally crude image, by the 1936 Olympic Games the technology had improved markedly. Included in the film is some amazing footage of a soccer game broadcast almost live: A 35mm camera mounted on a truck would shoot the players and the film would pass down into the truck where it was instantly developed and broadcast, resulting in a time-delay of only about one minute.

For historians, these surviving programs are interesting in unexpected ways. The television programs weren't carefully edited and manipulated like Leni Riefenstahl's famous documentaries or German newsreels; they relied on long, uninterrupted takes that allow for more detailed observations. One long segment of people on the street waiting for Hitler's motorcade to pass presents a familiar image in a new way. We see people standing around before Hitler's cars pass, and instead of tight close-ups of adoring faces we see the event from a distance, for a single perspective with unaltered sound. It's almost eerie because it's so much more immediate.

Television Under the Swastika is presented in its original full frame format in an okay transfer. The video transfer has several instances of damage-related video wrinkles, but the original program and all the archival footage itself looks great. The presumably original German narration has been replaced with good narration in English. The archival footage and some of the interviews are accompanied by English subtitles, white lettering with translucent gray backgrounds. The audio is up to contemporary television standards.

The only supplements are a brief text bio of the director and trailers for other Nazi Germany-related titles available through First Run Features, of which there's quite a lot.

This is an amazing little documentary, a must-see for anyone with an interest in television history and/or Nazi Germany, World War II, and the use of mass media for propaganda purposes. Highly Recommended.