Legend of the Lone Ranger, The

Lionsgate Home Entertainment // PG // August 26, 2008
List Price: $14.98 [Buy now and save at Amazon]
Review by Stuart Galbraith IV | posted August 21, 2008 | E-mail the Author
Though I might feel differently if I could see it today, the most exciting movie trailer I ever saw was for The Legend of the Lone Ranger (1981). The use of Rossini's William Tell Overture, the Masked Man's signature theme, certainly helped but the trailer was unusually well edited, suggesting a Western of epic scope, unforgettable characters, and heart-pounding excitement. Unfortunately, the trailer isn't on this DVD, nor has it yet turned up at places like YouTube. (Addendum: A big Thank You to reader Victor A. Ramirez who found it here.)

Instead, The Legend of the Lone Ranger became one of the most famous flops of its era; if not for the even bigger disaster that was Heaven's Gate, The Legend of the Lone Ranger probably would be better remembered than it is today. Actually, the movie isn't all that terrible, it just fails to live up to its considerable potential, with many interesting ideas and qualities undercut by others awesomely bad.

In other ways, the film is impossible to fairly assess. That's because, inexcusably, Lionsgate's DVD of this filmed-in-Panavision production is panned-and-scanned, in full frame format. In this day and age that's simply totally unacceptable. What major labels release panned-and-scanned-only DVDs anymore? I've sat through maybe ten panned-and-scanned movies in the past five years, and most of those were obscure Italian pepla or Spanish horror movies, not $20 million Westerns.

The picture was directed and photographed by two of the all-time great cinematographers, William A. Fraker and Laszlo Kovacs, respectively, but on DVD, visually, The Legend of the Lone Ranger is an incomprehensible, headache-inducing mess. The transfer is obviously old, perhaps originating in the mid-1980s (there's even a big videotape wrinkle during the climax), making it comparable to Platinum's PD Legends of the West series. Considering it came from no less than three major companies, ITC, Granada International, and Lionsgate (as opposed to some indie label with no money to do any better), this transfer gets a first-ever from this reviewer: no stars. Frankly, it shouldn't have been released in this form at all. 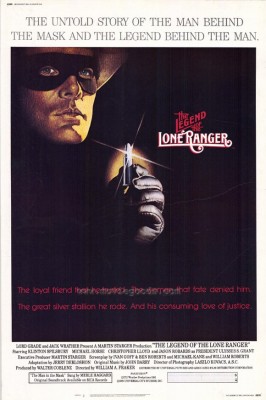 Like Superman (1978), and myriad superhero movies that followed, The Legend of the Lone Ranger is an "origin story," tracing the birth of the famous Western hero and detailing the hows and whys of such iconic elements as the Lone Ranger's use of silver bullets, his relationship with the Indian Tonto, and so forth.

The familiar story, dating back to the character's birth in a 1933 radio show originating out of WXYZ in Detroit, goes like this: John Reid (Klinton Spilsbury) and his Texas Ranger brother, Captain Dan Reid (John Bennett Perry), along with fellow rangers, are caught in an ambush staged by rogue Major Bartholomew "Butch" Cavendish (Christopher Lloyd). The rangers are wiped out, but John survives and is nursed backed to health by the Tonto (Michael Horse), John's childhood friend.

Determined to avenge the death of his only living relative, John dons a black mask and becomes The Lone Ranger, and with Tonto's help gradually uncovers Cavendish's plot to kidnap U.S. President Ulysses S. Grant (Jason Robards, well-cast considering his past) and demand sovereignty to East Texas in exchange for the president's safe return.

At the time of its release, there was considerable controversy surrounding neophyte star Klinton Spilsbury, whose first and last film this was. Some resented the concurrently shabby treatment of Clayton Moore, star of the hugely popular '50s TV series. The creators of The Lone Ranger unwisely sued the 65-year-old Moore, obtaining a court order preventing the much-loved actor from wearing his black mask during personal appearances. (Like Roy Rogers and William "Hopalong Cassidy" Boyd, Moore all but "became" the character he had played.) It was a public relations disaster, while Spilsbury's on-set antics, apparently including fighting with crew members and being uncooperative and combative throughout, won him few friends.

Those unaware of the film's controversies probably won't notice anything wrong with Spilsbury's performance, or the fact that he is dubbed throughout by actor James Keach. Physically he's fine, looking the part, and he moves well, but neither he nor the somewhat better Michael Horse have any of the charisma or chemistry Moore and Jay Silverheels (the TV show's Tonto) enjoyed. After the film Spilsbury fell off the radar completely and his whereabouts remain a source of much wild speculation.

The movie itself isn't too terrible. The script has potential, particularly in the way it reassesses the relationship between Reid and Tonto with a century of hindsight on Native American relations. Unfortunately, nothing in the film is explored with any depth and the characters, all of them, are like cardboard. Production-wise the film is pretty handsome. There's some nice Monument Valley scenery, and the use of familiar locations like Vasquez Rocks and Red Rock Canyon perhaps unintentionally adds an air of nostalgia. The stunts and action set-pieces seem to be well-done, though the panning-and-scanning all but ruins their effectiveness.

A major failing of the film is the music. Three components are constantly at odds with one another. The William Tell Overture dominates the second-half of the film, heard several times too many, while John Barry's original score, not one of his best, doesn't stylistically mesh with Rossini at all. But much worse was the truly odious use of country singer Merle Haggard, who performs a ballad-style history of the Lone Ranger written by Dean Pritchford (Footloose), and sung throughout the picture. It's god-awful, far worse than anything else about the film: "One thing about that Cavendish," Haggard yammers, unrhythmically, "He knew how to set a trap. And he finished off the rangers that day in Byrant's Gap." And, if you ask me, that's a load of claptrap, you sap.

And people are fretting over Lonesome Dove. The Legend of the Lone Ranger is no classic, but this transfer is a travesty. The panning-and-scanning is ruinous; the original cinematography is totally destroyed. Making it look even worse is the greenish-tone to much of the transfer, and the fact that it was shot in a style popular at the time (a la the 1978 Superman) which incorporates lots of filters and soft-focus photography (combined with grainy film stock). The film likely was a Dolby Stereo release, but the DVD is mono. English subtitles are included.

In Lionsgate's defense, they may be to some extent stuck between a rock and a hard place, much as MGM was when they licensed some old Cinerama Releasing Company (CRC) titles from Disney, and Disney would only provide old 4:3 LBX masters. This may be the same type of situation; back in 2006 Lionsgate also released P&S versions of two other ITC titles, Man Friday (1975) and Raise the Titanic (1979); those films deserve better, too.

The Legend of the Lone Ranger's terrible reputation isn't entirely deserved; it's okay in some way, bad in others. But until a decent 16:9 widescreen DVD or Blu-ray release (highly unlikely) comes along, we'll never really know for sure. Assuming ITC and/or Granada International provided Lionsgate with this panned-and-scanned disaster, for their part Lionsgate should have rejected it and demanded something better - or not release it at all. Skip It.