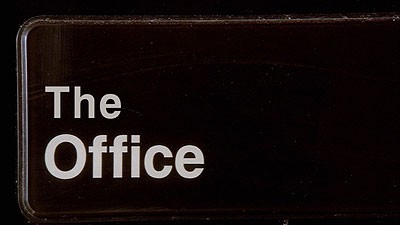 
The Story So Far...
Adapted from Ricky Gervais and Stephen Merchant's British series of the same name, "The Office" follows the staff of a paper company in Scranton, Pennsylania, in a documentary style. The group, led by ineffective regional manager Michael Scott (Steve Carrell), isn't particularly good at their jobs, but watching them cope with the oddities and obstacles of everyday life is a dark pleasure due to the uncomfortable nature of the comedy, while following the sweet relationship between Pam the secretary (Jenna Fischer) and Jim the salesman (John Krasinski) became an obsession for viewers. After putting the first season out in August of 2005, releases of "The Office" have become annual September events. DVDTalk has reviews of the previous three seasons: 1 | 2 | 3

The Show
Perhaps the writers' strike messed up the show's plans, but either way, the series went in an unusual direction for a comedy series this season. After giving the fans just what they wanted by pairing up Jim and Pam, apparently the creators felt viewers would enjoy themselves too much, so they dialed up the darkness. Sure, the series has always been loaded with black comedy and uncomfortable moments, but this season was over-the-top cringe-worthy, to the point where at times, it wasn't even funny.

The big focus this season, with Jim and Pam officially a couple, is relationships, as the wide majority of the office staff is either struggling in one, trying to get into one, or looking to escape one. While some love triangles emerge, like customer-service agent Kelly's ridiculous recovery from her break-up with new boss Ryan by clinging to Darryl from the warehouse, or HR guy Toby pining for Pam, the big one is between Dwight (Rainn Wilson), Angela (Angela Kinsey) and Andy (Ed Helms.) After Angela breaks things off with Dwight (for a reason that only Dwight could have caused), Andy swoops in, confiding his interest in her to Dwight, not knowing the whole story since the Dwangela relationship was a secret. Andy falls hard for Angela, but Dwight falls harder, as Angela uses Andy to dig at her former lover. You can actually have pity for Dwight at points, which is a confusing emotion, but the situation is played more for laughs than pathos. 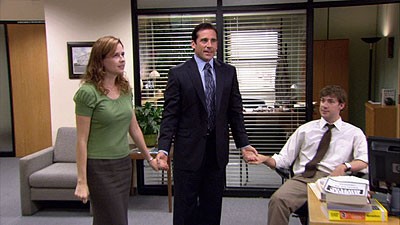 The other main couple this season isn't so funny, and that would be the disturbing relationship between Michael and his former boss Jan (Melora Hardin). Dysfunctional would hardly describe their coupling, as Michael just sinks deeper and deeper as Jan, who is unemployed, spends him into needing a second job and abuses him constantly. There are three flashpoints for the storyline, and all three will make you curl up into the fetal position out of sadness for Michael.

In "The Deposition," Michael is caught in the middle of Jan's lawsuit against Dunder-Mifflin, which reveals to Michael what Jan and his boss truly think of him, while "The Dinner Party" brings Jim and Pam into the scary world of Michael's homelife, resulting in cutting insults and sad, unspoken truths. But nothing will crush your spirit more than Michael's final three episodes this year, including a fight with Stanley (Leslie David Baker), a crushing job fair at a local high school and another Jan revelation, all of which underline how truly and utterly sad his life really is, as everything around him falls apart. The problem is, Michael shows himself to be a serious jerk, resulting in displays of serious cruelty, none more worse than his blind date with Pam's landlord. It's one of the most disgusting and hateful moments he's ever had on the show.

Part of the reason for the season's overcast feel is likely the promotion of Ryan (B.J. Novak) to Dunder-Mifflin's corporate office, where he became Michael's boss and a complete tool. The move is actually pretty organic and makes sense, since he's been the only person on staff with any real aspirations beyond Scranton. That he would move to New York and become every stereotype of a corporate big wig also is appropriate, but the natural pressure he puts on the Scranton staff, including a web site initiative that threatens the staff's jobs, sucks the funny from the show. Even Jim is dragged down by it, as he starts catching abuse from everyone around him, as tension in the office rises. Only when Ryan's new facade starts to crack, with "Night Out," do things lighten up, leading to the finale, which should put a smile on the faces of fans disappointed by how things went this year.

Among the highlights from this season, which include a hostage situation in "Launch Party" and a trip to Dwight's beet farm for Jim and Pam, is the season finale, which introduced Amy Ryan ("The Wire") as Holly, a new member of the staff in Scranton. The situation that leads to Holly joining the group, which includes a great Toby storyline, is bizarre, but very funny, and Holly is an excellent addition that fits in perfectly as a foil/love interest for Michael. Nothing during this dark and stormy season can match Holly's interactions for Kevin the accountant (Brian Baumgartner), as she is told by Dwight that he's "special." The results are great, as you get to see Kevin through a new prism that leads to big laughs. Hopefully there are more on the way in Season Five. 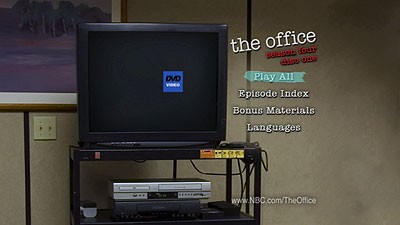 The DVDs
The 14 episodes of this strike-shortened season, five of which are double-length entries, are spread over four DVDs, which are packed in a four-panel, two-tray digipak (with episode descriptions, a breakdown of the extras and a somewhat legible image of Dwight's org chart), wrapped in an embossed slipcover, with a treat tucked inside (see The Extras for more info.) The discs have animated anamorphic widescreen menus, with options to play all, select episodes, check out the extras and adjust languages. There are no audio options, but subtitles are available in English SDH and Spanish. There is no closed captioning.

The Quality
Presented in anamophic widescreen, these episodes look great, with a clean picture, appropriate color, and a high-level of fine detail. There's not a speck of dirt or damage to be found, and digital artifacts are not an issue.

The audio, presented as Dolby Digital 5.1 tracks, delivering crisp, clean dialogue, which is really all there is to this show (though there's strong music during "Night Out," when Michael and Dwight go clubbing. There are some minor atmospheric effects coming from the side and rear speakers, but honestly, it's all about the speech here.

The Extras
As usual, the main attraction among the extras is the boatload of deleted scenes, which this time clocks in at almost 133 minutes (yup , spread over the four DVDs. And like the previous deleted bonanzas, these clips are just as good as the material that actually made it into the show. The footage comes from all over the connected episodes, in many cases from the show's little tangents from the main storyline, and incredibly, it all goes together. It's not as if they just threw it all up against the wall to see if it would stick. Everything here sticks, but there's only so many minutes in an episode and pacing is more important than wall-to-wall gags. If you don't have the patience to dig through all the material, definitely look for the talking-head scenes, which are frequently hilarious, and Pam, who gets off way more fun lines than make it into the final episodes.

Disappointingly, after getting 10 commentaries in season two, and eight on the season three collection, there's just four this time around, and like Carell in the two previous sets, Krasinski is now M.I.A. on these tracks. With just a few commentaries, the groups of participants are larger, with one track featuring five actors, two producers and a writer. The tracks are fun to listen to, as there's genuine chemistry and friendship between the cast and crew, and they seem to actually enjoy talking about the show (Hardin in particular is having a good time, "singing" along with the theme song.) Including director Jason (Juno) Reitman on his episode was a good choice, as he brings an outsider's point of view and questions to the mix.

There's a bunch of additional content spread throughout the set, starting with the 23-second faux "The More You Know" PSA about rabies, starring Michael, and the full "director's cut" Dunder-Mifflin ad seen in "Local Ad," which runs about a minute and a half. Both are amusing, but the ad is nice to see on its own, since seeing it on a TV in the episode masked a lot of what makes it such an amateur production.

Disc four has the remaining extras, including a 22:38 blooper reel, which is longer than those found on previous sets, yet still as enjoyable. I've found these features to be less interesting on comedies, but since "The Office" is playing it mostly straight, seeing them crack-up is hysterical, and for some reason, seeing Angela Kinsey break character is extremely funny. More informational, but still entertaining is the 53-minute "Writers' Block," a panel from the "Office" convention held in Scranton, Pennsylvania, featuring basically every writer from the series, sans Carell. Answering questions from fans, there's a great amount of info shared about the writing of the show, though the sound is a bit rough. Thankfully there are subtitles, so you can follow along.

Wrapping things up is a promo for the fourth season's premiere, catching up with the staff's summer experiences. Made up mostly of talking-head segments, the three-minute piece is funny for anyone who hadn't seen it before.

In a nice bonus, which according to a sticker on the packaging is a limited-time offer, the Emmy-nominated script for "The Dinner Party" is included in 40-page booklet form, so you can see what the show is like before it's interpreted by the actors and director. Considering the lighter bonus material, it's an appreciated little goodie. 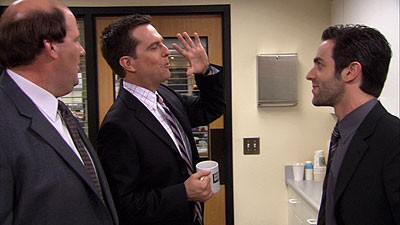 The Bottom Line
The fourth season of "The Office" is a heck of a downer, with darker material than anything to this point. Though the show remained well-made, and had moments of hilarity peppered throughout, there were many points that just simply weren't funny because of how cruel or depressing they were, though the finale brought things back to the usual levels of comedy. The DVDs look and sound as good as ever, while the extras are excellent, but smaller in quantity than previous sets, likely due to the shorter season. This is a must-see for the show's fans, but it's spot in your collection will depend on personal taste, as the episodes don't have the repeat-viewing value of previous seasons.