Justice League of America: Season One

After having great success with animating Batman and Superman, Bruce Timm and Paul Dini took a bold step and decided to bring the Justice League of America to the small screen. The classic DC Comics superhero team had been around for decades, but previous cartoon versions always left fans of the comics cold. Timm and Dini wisely avoided the pitfalls of the early incarnations; there aren't any teens tagging along with the group (something TV execs in the past had insisted on so that kids would have someone to relate to. Apparently these executives had never been kids themselves) and the dump pets that populated Superfriends are not to be found anywhere. Instead Timm based the show on DC's greatest heroes and concentrated on telling stories that didn't talk down to kids. Filling the shows with superhero action and a touch of comedy, the program is a worth successor to Batman: The Animated Series and Superman. The first season has now come to Blu-ray, and while it regrettably has the same fullscreen transfer that the DVD set contained, the show looks better than ever. 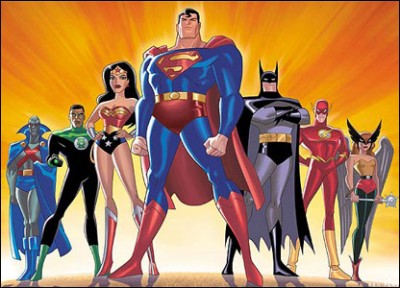 Superman, Batman, Wonder Woman, Green Lantern, Hawkgirl, The Flash, and J'onn J'onzz the Martian Manhunter: They are the world's greatest heroes who have teamed up to protect the world from evil and threats that are too great for any single member to combat. Guarding the Earth from their satellite headquarters, this team is always ready to jump into action.

This first season has them fighting a slew of menaces, from war machines that come from Mars to conquer our planet to Gorilla Grodd and a renegade Amazonian, Aresia. Not all of the stories are based on Earth either. When Green Lantern is kidnapped and tried in an alien court the heroes travel off planet, and Superman and J'onn are taken prisioner on the War World and forced to fight in gladiator-like combats. This mix of terrestrial an alien menaces keep the show fresh and different, viewers never know where the story will take them next. 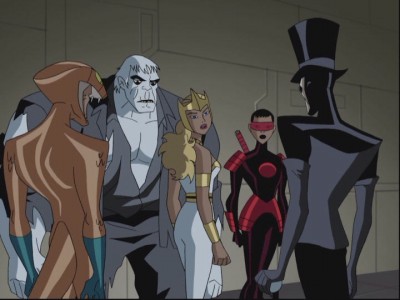 The best part about this series is that it captures the fun and wonder that the JLA and other superhero comics held when you were a kid. The characters are still bigger than life and while each one has a distinct personality, they are all heroic. Flash (based on the Wally West incarnation of the character) is an impulsive guy who is quick to poke fun at a situation and rarely takes danger seriously. Green Lantern (the John Stewart version, mostly) is a hard-nosed military man who wants to do things by the book. Batman is secretive and untrusting, and Wonder Woman, new to 'man's world' is surprised by much that she sees and experiences. The interaction between these heroes of differing temperaments gives the show a sense of fun.

One great thing about this series is that they didn't let themselves be limited by the half-hour format. All of the stories are multiparters, taking two or three episodes to tell the tale. This is as it should be. Earth shaking villains such as the once the Justice League faces shouldn't be introduced, create terror, and be captured all in 22 minutes (without commercials.) They stories need more time to unfold at a good rate, but not feel rushed. While there are a couple of stories that aren't quite as exciting as the others, it's to the creator's credit that they took their time with all of these tales. 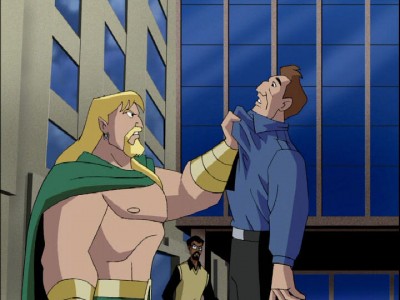 One of my favorite adventures in this season is "The Enemy Below" that includes a guest appearance by Aquaman. He's decided enough is enough and declares war on the surface world. Aquaman, the king of Atlantis was very regal in this episode, something that doesn't always come across in the comics.

Another great story was "Metamorphosis" which stared one of my favorite DC characters, Metamorpho. Yeah, he's a bit silly, but in this episode they tap into the tragic aspect of his story and it also shows just how powerful someone who can change their molecular makeup at will can be. I always though he was an underutilized hero and it was nice to see him in this series. 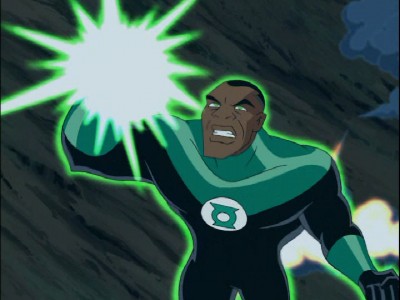 The season really ends on a high note too, with arguable the best story of the season. In "The Savage Time" the league returns from a mission in space to discover that the world has changed drastically. The whole planet is ruled by a dictator: Vandal Savage. The league quickly discovers that Savage used a time machine to alter the outcome of WWII and they have to travel into the past to set things right. An exciting tale that includes a cameo by Steve Trevor from Wonder Woman fame.

The most notable change that fans of the earlier Timm/Dini DC cartoons will notice is that while Kevin Conroy continues to voice Batman, Tim Daly is no longer the actor who plays the Man of Steel. He has been replaced by George Newbern. There was a lot of criticism of Newbern's portrayal when the series was first aired, and some of it was valid. In this first year, Superman's voice doesn't quite have the gravitas and awe inspiring feeling that it should. While he doesn't do a bad job, it's not quite as impressive as Daly's performances. This is corrected in the second season, where Newbern really gets a handle on his character.


The 26 episodes (telling 12 stories) that make up the first season are presented on three Blu-ray discs. These come in a case about 1 ½ times as wide as a regular Blu-ray case with a page inside that holds two discs. There is also an insert that gives the contents of each disc.

The big disappointment with this set is that the video is presented with a 1.33:1 aspect ratio. While the shows were broadcast with that ratio originally, they were designed to be shown in widescreen and the creators have stated that this was their original intent. I can only guess that they've followed Disney's lead and decided that children's shows and movies should be released only in full frame. That really sucks and they loose a star on the video rating for that.

This set comes a Dolby Digital 5.1 audio that sounds fine for a children's TV show but isn't really as dynamic and exciting as it could be. The audio doesn't make as much use of the surrounds as I would have liked, with most of the action centered on the screen. There is some use of the front soundstage, including some nice pans during some of the action sequences, but nothing exceptional.

The set ports over all of the bonus items found on the earlier DVD release of this show, with the video extras being presented in SD. First off there are a trio of commentary tracks by Bruce Timm, James Tucker, Glen Murkakami, Rich Fogel, and Dan Riba. They comment on "The Enemy Below Part 2", "Legends Part 2", and "The Savage Time Part 2", and their comments are lively and interesting. They discuss the changes the characters underwent going from the four color page to the small screen and why, as well as how the stories evolved. A great set of audio tracks.

The video bonus items start out with "Inside Justice League" a 10-minute discussion with the creators who talk about why certain characters were selected for the team and the genesis of the show. It was very informative and I wish it had lasted longer. There's also a five minute promo that was used to sell the show, a look at the character designs, and a look at how storyboards are used in the show. The extras are wrapped up with a Blackhawk Theme music video.

A very fun and enjoyable show, if you liked the animated adventures of Batman and Superman, you need to pick this up too. The Blu-ray presentation makes these shows look better than I've ever seen them, but it's too bad that they are still in full frame mode, rather than the director's preferred 1.78:1 ratio. In any case, this is a set that belongs on every animation fan's shelf. Highly Recommended.