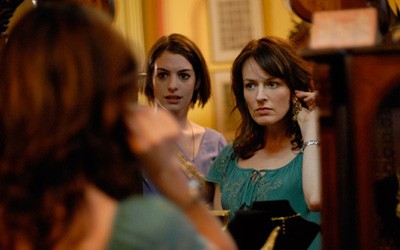 I don't know how you feel about weddings, but I generally try to avoid them. While I can't exactly say Jonathan Demme pulled a fast one on me, since he and writer Jenny Lumet were very up front with their movie's subject when they decided to call it Rachel Getting Married, I still wish I had known they were intending to show so damn much of Rachel's nuptials before I went in. Then I might have gotten drunk before the screening, just so I could have enjoyed this movie in the same spirit as I normally enjoy real weddings.

Anne Hathaway stars in Rachel Getting Married, but she's not Rachel. Mad Men's Rosemarie DeWitt is Rachel, and the Get Smart star is her little sister Kym. Kym has spent the last nine months in rehab, getting out just in time to attend the wedding rehearsal and meet her sister's fiancé (Tunde Adebimpe, from the band TV on the Radio). Too bad for her, because all this recovery means she can't get imbibe in alcohol at any of the parties or during the ceremony, which would have made the whole thing easier for her, just as it would have for me. But hey, this way I am in the same boat as Anne Hathaway, and I can't complain too much about that, can I?

Weddings are tumultuous, emotional affairs. New family members are coming together, old family grudges may rear their heads, people get selfish and demanding, and so in a lot of ways, Kym constantly pushing her problems center stage shouldn't be all that surprising. Rachel is actually kind of lucky that Kym is the only one trying to commandeer her day, and if Rachel had ever seen shows like Bridezillas, she might actually realize that her perpetually distant and often absent mother (Debra Winger) is really doing her a favor staying out of it. Besides, Kym brings enough issues to the table that they have plenty enough to sift through. There is a lot of sibling resentment to be atoned for, a lot of bad deeds, ranging from stolen money and broken promises to an accidental death in the family. For a movie about a happy occasion, Lumet's script goes to some dark places, and when it does, it is often compelling and emotionally brutal.

Unfortunately, Jonathan Demme wants to give us as much happiness as he does sadness, and so we must also endure long stretches of film dealing with the rehearsal and preparation for the wedding, the ceremony, and the reception. After a series of big-budget flops that have made the former indie wunderkind and Philadelphia director's career look rather threadbare over the last decade, Demme has adopted a down-and-dirty style of shooting for Rachel Getting Married that is reminiscent of the Danish Dogme movement and hearkens back to the more personal aesthetic of his earlier films. Natural lighting and hand-held cameras allow him to get up close and personal with his actors, and it works very well in capturing the rawness of the exposed feelings. On the flipside, it also allows him to get overly indulgent, and scenes go on long after a more judicious director would have cut them. In particular, it's hard to sit still during toast after toast at the rehearsal dinner or the ridiculously excessive montage of dances at the reception. There are multiple instances in the movie where Demme just needed to get on with it, and I would have loved for a good editor go back into this picture with a hatchet and chop a good half hour out of it. I suppose that we should all be impressed that the director knows so many musicians and they were willing to perform a tune at this fictional wedding, but seriously, enough is enough.

In fact, the most cathartic moment in Rachel Getting Married is when Kym calls for the music to stop. A live ensemble of violin, drums, and other instruments stand in the background and play during most of the movie, and it becomes so grating, when Kym loses her cool and demands some quiet, it's a blessed relief. It's a disservice to Lumet's writing and the fine performances of the actors for Demme to distract from them with so much noise. If the movie were just about a party, that would be one thing, but there are weighty issues being dug at here, and it starts to feel like the director sees them as nuisances he has to put up with in order to get back to shooting another drum circle.

Luckily for Jonathan Demme, the casting director on this picture was looking out for him, and his lead actresses make it impossible for him to completely wrench the movie from their hands. Hathaway and DeWitt are utterly convincing as sisters, with the kind of rapport that you only get from two people who have grown up together and thus can't decide whether they hate or love one another from moment to moment. When I saw the trailer for this movie, I wasn't sure I was going to be able to accept Hathaway as the troubled bad girl, I thought it would be like Katie Holmes dying a red streak in her hair and copping an attitude in Pieces of April. Shame on me, because Anne Hathaway is ten times the actress that Katie Holmes is, and the suffering and humiliation she goes through as Kym is heart wrenching. Kudos, too, to DeWitt, who manages to make Rachel sympathetically selfish. She deserves to demand a little attention for herself, but a lesser actress might have caused the audience to turn against her. Together, these two performers almost make Rachel Getting Married worth it, but not quite.

If Jonathan Demme wanted to make a wedding video, I am sure there are plenty of real-life couples who would have been more than happy to accept his services. They'd probably have let him pave memory lane for as long as he felt the urge to wander it. A high-strung drama like Rachel Getting Married deserves a more controlled hand, however, and the director's lack of restraint or balance turns what should have been a far more involving experience into punishment. For as good as the more direct scenes were, the rest of Rachel Getting Married wore me out too much to actually care when the much-needed reconciliation finally came around.

RSVP "no" to this one in the theatres, and make it up to the leading ladies on DVD when you can fast forward through the junk that doesn't really involve them anyway.