Synapse Films // R // October 28, 2008
List Price: $19.95 [Buy now and save at Amazon]
Review by Cameron McGaughy | posted October 27, 2008 | E-mail the Author
"We had such fun making the movie. We were making this kind of perverse horror comedy, and I think it was the comic aspects that kind of surprised people."
- co-writer Bill Condon

The Movie
One of the joys of being a reviewer is discovering lost gems like Strange Behavior, a 1981 hybrid of science fiction, horror and comedy set in a small Midwestern town (but filmed in New Zealand). The film was the first screenwriting effort from Bill Condon (he co-wrote with first-time director Michael Laughlin), long before he wrote and/or directed Dreamgirls, Chicago, Kinsey and Gods & Monsters, a film that also displayed his love for horror's heyday.

I'll admit up front that the whole of Strange Behavior is not equal to the sum of its parts, but those parts are so insanely fun, I don't care. Where else can you find an esteemed Oscar-winning actress starring in a film alongside hip young stars from Tron and Rock 'n' Roll High School? Where else will you see a musical number with teens in 1960s' TV character costumes (the Flying Nun!) dancing to Lou Christie's "Lightnin' Strikes" interspersed with clips of a killer in a Tor Johnson mask stalking a 14-year-old girl? If you aren't yet convinced, I have two words for you: Tangerine Dream!!!

Strange Behavior has an odd energy that rocks and rolls: Set in the early '80s with a hip 1950s vibe, it still feels (and looks) surprisingly relevant and timely today. The bizarre entry fuses '50s sci-fi pulp with '80s slasher sensibilities, all handled with a deft, deadpan humor that doesn't feel dated. In the small Illinois town of Galesburg, teenager Pete Brady (Dan Shor) is introduced to a study at the local college by friend Oliver (Marc McClure), who uses the opportunity to make extra cash.

The two crash an orientation session led by the deceased Dr. Le Sange, whose video lectures teach the students from beyond the grave: "Behavior is nothing more than the sum of the mechanical activities of our bodies!" he advises as his assistant Gwen Parkinson (the fabulous Fiona Lewis) carries out his behavior modification work, like instilling better diet habits in chunky test subjects. She's delighted to get her hands on Pete, who finally decides to try out the experiment, befriending secretary Caroline (Dey Young) in the process.

But Pete may be in for more than he bargained for considering the guinea pig kids have been exhibiting violent behavior, knocking off the locals in gruesome fashion. Trying to solve the case is Pete's sheriff dad John (Michael Murphy), who is still distraught over the death of his wife--much to the dismay of girlfriend Barbara (Louise Fletcher)--a mystery that may have ties to Dr. Le Sange's lab.

Strange Behavior doesn't take itself too seriously. While a lot of the scenes don't connect perfectly, some of them are so beautifully crafted they make up for the movie's schizophrenia. Besides the unforgettable dance party, you also a shadow puppet murder shot (!), a fun final lab standoff and a creepy sequence where a housekeeper makes a startling discovery ("The Meryl Streep of New Zealand," says Condon in the audio commentary. "Look what we're doing to her!"). A few individual frames also shine, helped by eerie cinematography from Louis Horvath and Susanna Moore's modest yet moody production design, both evoking a cool '50s groove. I also appreciate the score, which doesn't try to overdue it.

(Oh! There's also one scene in a diner that made me cringe out loud in disgust, a moment I will never forget...)

The cast here is having a hoot, and even the actors with tiny roles get in some zingers (after one of the more hysterical lines--and there are many--Condon notes in the commentary: "Oh God...they're all in different movies, aren't they?"). Two performers stand out: Lewis oozes dangerous sexuality as a modern day mad scientist, her tightly coifed hair topping an icy exterior. But the real treat here is Shor, whose freshness as an actor translates perfectly into the innocent Pete. It's a treat watching his face throughout the movie--you can feel the joy he had making the film, his engaging personality a perfect fit for the film's tone. (He also rocks an amazing bum and some pretty cool red Converse sneakers!)

The film isn't perfect: a lot of plot points don't make sense, the editing (especially in some of the tense sequences) is a tad choppy, Murphy's performance is a little too low-key in some crucial sequences and the final scene (and abrupt cut to the credits) feels misplaced. But even when some of the scenes and lines venture into unintentionally funny territory, they still fit the film's wacky tone--almost as if the comedic touches are intentionally meant to wink at 1950s' camp cinema (watch for a face shove in a car that results in a highly improbably outcome, and listen for a hysterical line in the lab at the end). So even when Strange Behavior gets a little sidetracked, it still works.

Laughlin and Condon--along with much of the cast--went on to create the second in the incomplete "strange" trilogy: 1983's Strange Invaders, another exaggerated exercise that blended genres. Both film's probably had an influence on Fred Dekker, whose 1986 flick Night of the Creeps (still waiting for that DVD, folks!) channeled a similar tone as it balanced humor and horror (adds Condon: "There's an unofficial remake called Disturbing Behavior...it had a lot of the same stuff in it.").

It's not surprising that Strange Behavior caught the attention of Z Channel, which showed it shortly after its theatrical release (Pauline Kael was apparently also a fan). There's something so refreshingly nutty about the film, unlike any other I've seen. It works as a comedy, a sci-fi flick and a slasher--and you can just feel the enthusiasm and love from everyone involved. Check out this kooky, contagious creeper--I guarantee you won't be bored!

Video:
Strange Behavior arrives in an anamorphic widescreen transfer, and it's clear the film was in dire need of a presentation in its original aspect ratio (in the audio commentary, Condon notes his joy, having not seen it that way in 20 years). Considering the film's budget and age, this transfer looks pretty good. Lots of grain and film specs are present, and while the colors aren't vibrant, they still pop enough when they need to. In the commentary, Condon points out that cinematographer Louis Horvath aimed to recreate the feeling of a Technicolor movie from the '50s, something production designer Susanna Moore also went for: "[She] really went with that idea of watching a kind of Technicolor 1950s world. Very, very innocent, and you can see that."

Audio:
The mono track (available in English and Spanish) won't wow your ears, but it does a good job of keeping up with the dialogue and effects just fine.

A lot of fun is found in the audio commentary with co-writer Bill Condon and actors Dan Shor (Pete) and Dey Young (Caroline), a track that was recorded around 2002-03 --perhaps for an overseas DVD release (Condon notes that director Michael Laughlin was supposed to join them, but had travel issues). It's great listening to the three share memories from the 30-day shoot in New Zealand. They have as much fun watching and talking about the film as they did making it, resulting in an informative, laugh-filled track.

"Michael did really approach this as a kind of feature-length Twilight Zone episode. That's part of the deadpan nature of everything--of the way he shot it, even the way I think some of the performers are," Condon says. "It's that part of the '50s, it's that kind of science fiction: very blunt, very dry, and kind of a comic riff on that. I have to say, it is unlike any other movie. It has its own personality."

Condon talks about how the film started, and how it was given an easy green light: "It was really this era when these low-budget horror movies were en vogue...it was an easy way to get a movie made," he says, adding that it stood out from the serious, gory slashers that were popular at the time. Condon talks about many of the actors in the smaller parts (most of whom have impressive credentials), and marvels at how he got the talent: "We sort of went to a lot of movies and saw these actors we liked and called them up...it was amazing how many people agreed to come do this film."

Shor frequently laughs at his own performance and flirty nature on the set ("I was so busy being cool"), and all three enjoying seeing his bare backside in an odd scene that made him popular: "I should stop talking right now because this is a glorious shot of Dan coming up, and we don't want to miss it at all," warns Condon, to which Short replies: "Oh my God...this next scene is the one that cemented my popularity in West Hollywood. I remember reading in a magazine once, 'One of the five best tuchises in Hollywood!'" (and it is!)

A few more neat nuggets are revealed: Klaus Kinski was meant to appear but dropped out shortly before shooting started; the film was initially called Dead Kids (the name it retained for its Aussie release), but an infamous string of child murders in Atlanta (from 1979-81) prompted the studio to change the title for its American release (CBS and the New York Times refused to accept ads for the original title); and the editor apparently had reservations after the work was complete. "The credits read 'Editing by Petra,'" Condon says. "She had just come off of a Bergman movie to do this, and I think she was a little embarrassed by the end, so she took her last name off of it, which is too bad." (Maybe she was embarrassed by her work, because a few edits here are a tad sloppy.)

It's also hysterical to listen to the trio point out a few flubs, like errant accents that crept into the film (but my favorite is an odd prop--an empty photo frame!). They also make fun of their performances--none knew how to smoke, and Condon (who appears as the opening victim) squirms at his brief scene. Shor and Young also chuckle as they recall being clueless about Condon's sexuality ("I didn't even know he was gay," says Shor; "I had a crush on him," responds Young). They all also get a kick watching the film's signature scene: "It was really fun and bizarre," Condon says. "I love that about Michael, that he's just willing to put a musical number into the middle of a movie just for the hell of it." 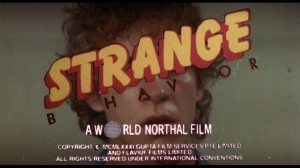 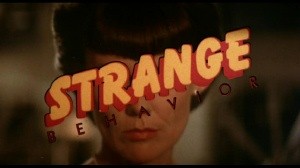 Also included are two deleted scenes (2:02) with optional commentary from Condon. Neither is essential, although the first one (with Louise Fletcher) would have bridged two scenes more seamlessly. Also included are two trailers (the U.S. one and the Aussie Dead Kids version) and trailers for other releases; a photo gallery; text filmographies for 12 cast and crew members; and an isolated music score from Tangerine Dream.

Final Thoughts:
Unlike most anything I've seen before, this low-budget blend of horror, science fiction and comedy is a nutty, unique treat. Made and set in the 1980s with a 1950s' flavor, Strange Behavior stands up remarkably well today. While the whole doesn't equal the sum of its parts, those amazing parts are beautifully crated by a cast and crew that loved what they were doing. That passion shows, and it's impossible not to be entertained by this bizarre blend of genres. Highly Recommended. 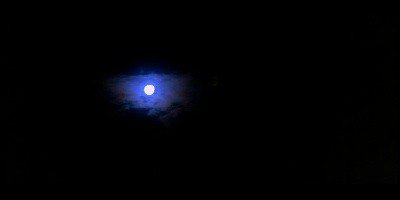