Michigan vs. Ohio State: The Rivalry

HBO // Unrated // October 28, 2008
List Price: $19.98 [Buy now and save at Amazon]
Review by Cameron McGaughy | posted October 29, 2008 | E-mail the Author
"Separated by less than 200 miles of heartland,
these uneasy neighbors engage in one of the oldest
and deeply rooted rivalries in American sports..." 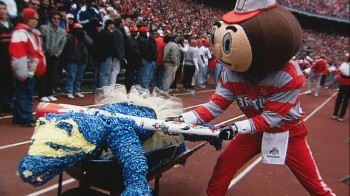 It's safe to say that in the Michigan/Ohio State football rivalry, I'm an equal opportunity hater. As a Penn State graduate and longtime college sports fan, I've angrily shouted at my television more times than I care to remember. I was lucking enough to attend Happy Valley during the Nittany Lions' memorable undefeated season in 1994, and saw the amazing homecoming game that year where--as the No. 1 team--they mauled the Buckeyes in front of a boisterous crowd just two weeks after fighting off No. 5 Michigan in Ann Arbor (screw Nebraska! That Huskers national title is a shared honor at best!).

And prior to this year (let's go State!), that was the last time Penn State defeated both Big Ten juggernauts in the same season. My boys came close in '05, save for a controversial last second touchdown by Michigan--a play run after the game ended, thanks to some Wolverine whining and BS officiating (breathe out, Cam! Breathe out!!!). Just writing about it fires me up, and it's that competitive spirit and passion--from teams and fans--that make college sports so exhilarating, unique and dramatic. 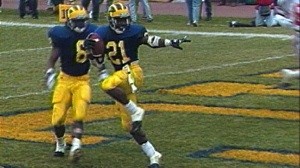 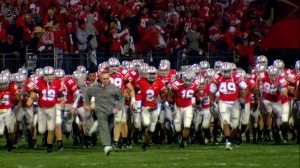 I love the game, and root (mostly) for the Big Ten when the teams play out of conference, especially in Bowl games. If pressed to choose, my anger meter may sway a tad more to the Michigan side. I have a t-shirt that makes me giggle ("Ann Arbor is a Whore"), and have to admit at mild amusement for the Wolverines' recent embarrassing losses to Toledo and Appalachian State. But I pulled for them in their '96 run to the title (wait, they get to share with Nebraska and we didn't?!), and was thrilled for Ohio State when they topped Miami in one of the most memorable BSC title games ever (and was devastated by their losses in '07 and '08).

And every year as the end of November approaches, I'm always on my couch to watch "The Game" unfold as another chapter in the best college football rivalry--and one of the best in all of sports (the battle predates the World Series and the NFL)--is written. So it was with much excitement that I popped in this hour-long documentary (which airs Nov. 13, 2008 on HBO) that takes a look at the history of the bitter Michigan/Ohio State gridiron battles. 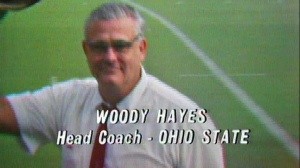 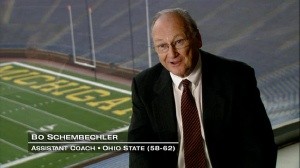 Who knew that the Toledo War of 1835--when Michigan lost a border dispute over the Toledo Strip, which was snatched up by Ohio--would lead to such animosity? This year's upcoming contest will be the 105th meeting between the two schools, with the Wolverines holding a 57-41-6 advantage, and an 11-7 margin in national titles; the Buckeyes have the edge in Heisman Trophy winners, All-Americans and Bowl appearances. The contest is usually one that carries importance in both the Big Ten and national championship title races. But even when one or both of the teams is having a down season, it's still a game that is guaranteed to entertain. 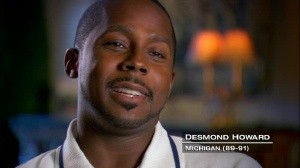 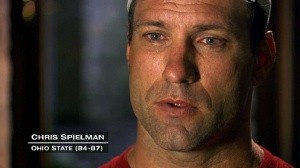 Featuring narration by Live Schreiber and interviews with coaches, players, fans (including one very annoying Buckeye fanatic), journalists and historians from both programs, The Rivalry offers a dramatic and frequently funny glimpse ("That's where I learned hatred," notes one voice in the opening montage) into this storied battle for bragging rights. But it didn't start that way in 1901, when Michigan rattled off the first of 15 victories. We're briefly taken through the early history, which was marked by seesaw streaks when the Buckeyes got their first win in 1919, with the legendary stadiums of both schools built soon thereafter. 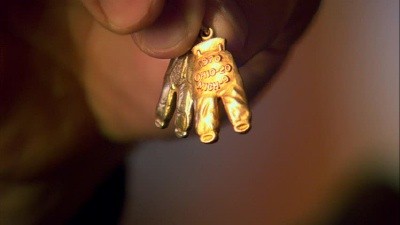 Game recaps are interspersed with amusing tales off the field, including Ohio State coach Francis Schmidt trying to demystify the Michigan mystique ("They put their pants on one leg at a time just like we do!") and giving the players mini-pants for each win in the series. We also learn that the iconic Michigan helmet wing was introduced to help quarterbacks see their targets better.

Greater attention is paid to a few games, like the 1950 "Snow Bowl" that featured 45 punts and a 9-3 win for Michigan--even though the Wolverines didn't earn a single first down. That's soon followed by a look at "The 10 Year War" of the 1970s ("It became more real and it became more serious," says former Buckeye Randy Gradishar of the era), when Buckeye coach Woody Hayes did battle with former protégé Bo Schembechler (the two central figures in this documentary). The former Buskeye assistant gets lots of screen time sharing his memories. 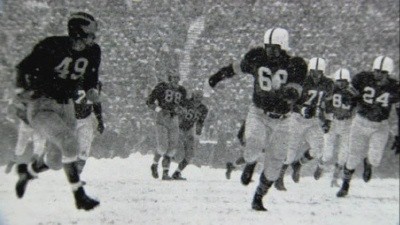 Schembechler frequently talks about his cold on-field relationship (and we soon learn close off-field friendship) with Hayes, whose passion is seen in some archive footage. Schembechler's presence here has added emotional impact--much of this documentary was filmed shortly before his death on November 17, 2006 (his passing spelled doom for Buckeye-loving band The Dead Schembechlers, who have a song in the soundtrack). He died just one day before the most memorable battle between the two schools ever: The Game of the Century featured two undefeated squads, ranked No. 1 and No. 2 for the first time in history. 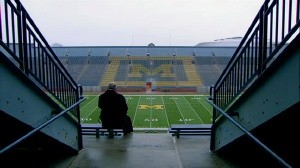 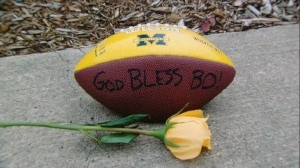 The poor respect for the game's tradition spelled doom for John Cooper, whose results against Michigan led to his ouster (he was replaced by the far more successful Jim Tressel, who shares a few thoughts here). The documentary frequently steps away from the field, including a humorous halftime segment where fans share jokes at the expense of the enemy (the gist: Michiganites are snobs, Buckeyes are rednecks; surprisingly, Michigan alum and legendary newsman Mike Wallace seems to enjoy trash talk). The culture on campus (and in each state) is also explored, as is the trend of many Ohio high school standouts crossing state lines to don the maize and blue. 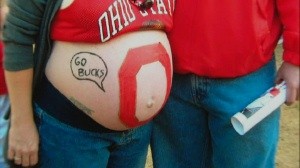 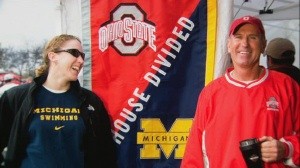 But as entertaining as it all is, this hour just scratches the surface on so many interesting stories. There's at least another hour of footage (if not more) that would make this documentary have more depth and impact. Many games are glossed over or not even mentioned (Michigan spoiling Ohio State's perfect season twice in the mid-'90s gets virtually ignored), leaving a lot of compelling games unexplored. And most shocking to me: Not only is Lloyd Carr not interviewed, his name isn't even mentioned! (I, and I'm sure many Michigan fans, still don't understand why he "left" the program.)

And plenty of great off-field stories--like life in a border town where fans of both schools co-exist, and the controversial aftermath of the 1973 tie game that led to a Big Ten official vote for the Rose Bowl representative--are underdeveloped, entertaining bits that only get brief mentions. The hour also feels slightly inequitable, with a tad more time paid to life in Ohio's football-obsessed culture. 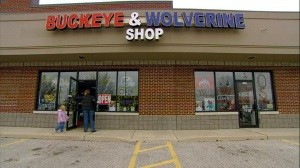 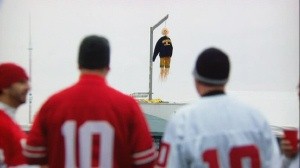 But it's still worth a watch. My favorite moment has a clip of John Kerry on the campaign trail in 2004, featuring an infamous verbal blunder on a stop in Michigan that makes me cringe in embarrassment. And plenty of other quotes and clips will keep you engaged. But as a longtime college sports and Big Ten fan, I can't help but think there's a bigger, better look at this amazing rivalry just dying to get made.

Until then, I'll be rooting on JoePa and my Nittany Lions, and will savor this season for as long as I can (must...beat...Iowa!). Sure, the Buckeyes and Wolverines frequently have our number on the football field...but don't even think about messing with our women's volleyball team! 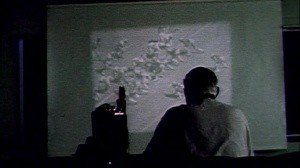 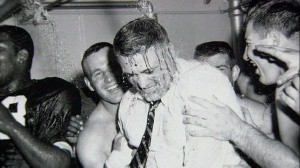 Presented in an anamorphic widescreen transfer, the image varies with the source material (the older the footage, the rougher the picture). The current interviews and game footage are all crisp and sharp, with bold colors.

Available in either English or Spanish 2.0, the audio track is solid for a small documentary. None of the game footage envelopes you in the atmosphere of screaming fans and energized stadiums; a 5.1 track and more game footage would have been nice. 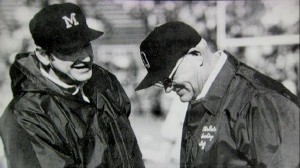 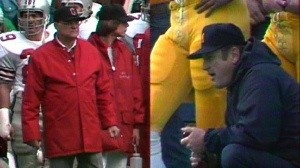 Here's something both Buckeye and Wolverine fans can agree on...zero extras stinks!

As a longtime college sports and Big Ten fan--and an equal opportunity hater of both the Buckeyes and the Wolverines--it was nice exploring this look at one of the greatest rivalries in all of sports. Many stories on and off the field are dramatic and funny, but I can't help be a tad disappointed. A rivalry this old and this epic deserves more attention, and this hour leaves a lot of great stories (and games) underdeveloped or unexplored. For Michigan and Ohio State fans, it's an essential library addition. For everyone else, Rent It. In the meantime, go Nittany Lions! (WE ARE!!!) 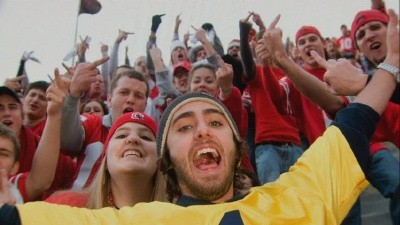