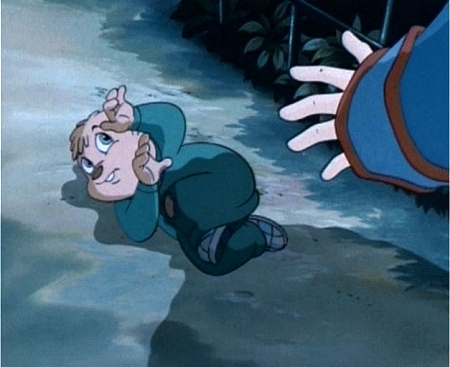 Ross Bagdasarian's The Chipmunks have been a pop culture staple for over 50 years, thanks to a string of musical hits, animated shows, merchandise and a recent live-action movie. This trio of high-pitched critters---along with their "dad" and manager, David Seville---was voiced by Bagdasarian until his death in 1972, when his son (Ross Jr.) and daughter-in-law (Janice Karman) took over vocal duties. Whether you're a fan of the 1950s and 60s-era songs, the short-lived Alvin Show, the long-running 1980s animated series and/or the recent movie, it's tough to find someone unfamiliar with Alvin, Simon and Theodore. Paramount has unleashed a series of holiday collections on DVD to keep the momentum going; today's review looks at the three-disc "Classic Holiday Gift Set", which includes Halloween, Thanksgiving and Christmas-themed Chipmunk episodes and specials from the 1980s and beyond. Though they're also available separately, die-hard fans will find this release an easy way to get everything in one fell swoop.

Chronologically speaking, Halloween is our first destination, with the aptly-named "Trick or Treason" (above) serving as Disc 1's main feature. This 1994 special isn't a bid little effort; the holiday is fast approaching, and our trio is looking forward to collecting bags of candy. That's not the only thing on Alvin's mind, though: he's trying to join a super-secret club, with member benefits that include a sweet leather jacket. Naturally, he's got to prove himself to the brutish club leaders, who dare Alvin to humiliate the "monster" that lives next door to the club's headquarters. It turns out that the monster is actually just a boy with facial deformities...and to make matters more complicated, Theodore has recently become friends with him. Though not without a few missteps along the way, this unconventional Halloween adventure will certainly surprise some viewers.

Four other loosely-related episodes (12 minutes apiece, from the 1988-89 seasons) are also included on this disc. "Babysitter Fright Night" sees the boys on a night without Dave...but there's more to their babysitter than meets the eye. "Theodore's Life as a Dog" is another self-explanatory adventure, as the pudgy Chipmunk eats a dog biscuit and displays were-like symptoms. "Nightmare on Seville Street" finds the boys in a more paranoid state, after they sneak into a scary movie before a thunderstorm. The best of the bunch, "No Chipmunk is an Island", shows the boys going their separate ways (in their imaginations, at least) after Dave confines them to different rooms. 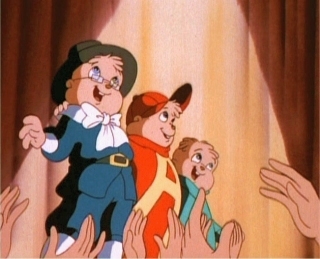 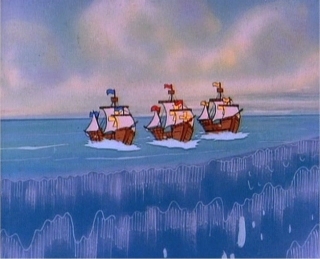 Thanksgiving arrives on Disc 2 with "A Chipmunk Celebration" (above left), a 1994 special that's only loosely connected with the holiday. Dave and the boys are hurriedly mailing out invites to the relatives in-between rehearsals for the big Thanksgiving play, but the director decides to shake things up by assigned them roles they're not familiar with. The generally reserved Simon is given the lead role, rambunctious Alvin is assigned to costume detail, while the young Theodore is in charge of the lighting. They try to weasel their way out of it by staging a daring rescue at the local zoo (what the...?!), but a helpful police officer gets them to the stage on time. Afterwards, they enjoy dinner with the human and chipmunk sides of the family. The latter are drawn like rejects from a Dr. Seuss cartoon.

Three very loosely-related episodes (roughly 22 minutes apiece, also from the 1988-89 seasons) are also included with Disc 2. "Food For Thought" (above right) is a little educational trip back to the Pilgrim days, as Theodore needs help studying for a big history test before the boys take a trip to the amusement park. Alvin and Simon help him out by telling creative stories to keep Theodore sharp, but all he needs is a little food-based osmosis during breakfast. "Cookie Chomper III" tells the sad, sad story of a lil' kitten that the boys keep hidden from the allergic Dave...but tragedy strikes after the cat escapes, so the Chipmunks have to learn how to deal with the loss of a loved one. "Dave's Getting Married" shows the boys trying to block Dave from getting his swerve on, but they end up liking his new beau after getting to know her. Unfortunately, her three sons aren't as likable, especially during a stressful trip into the wilderness.

Disc 3 ushers in the yuletide season, with the decidedly different "A Chipmunk Christmas" (below left) serving as the third main feature. This 1981 special---which led to the long-running animated series later that decade---features a spiffy vintage look, courtesy of character designer Chuck Jones and background artist Toby Bluth (among others, of course). The actual story is a bit on the thin side: Dave and the boys are prepping for a big holiday concert, which just so happens to feature a big harmonica solo by Alvin himself. Problem is, the precocious little chipmunk already gave his prized harmonica away to a sick little boy, so he's got to scrape together some cash for a replacement. Aside from a somewhat obnoxious second act, A Chipmunk Christmas is one of the trio's better adventures; featuring plenty of high-pitched holiday favorites and solid animation, fans of all ages should enjoy the show. 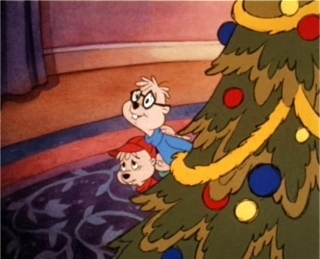 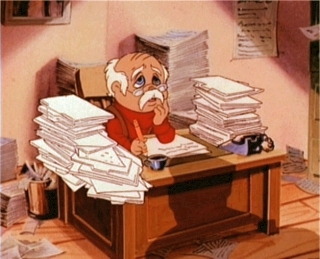 Only two loosely-related episodes are included on Disc 3 (roughly 23 minutes apiece, also from the 1988-89 seasons), but they're both pretty decent. The better of the two, "Merry Christmas, Mr. Carroll" shows Alvin in full-on brat mode, ditching his responsibilities to make time for writing a huge Christmas list. As the deadline for Alvin's one-page essay approaches, he's visited by three spirits who show him his past, present and future behavior and why he ought to change. Sound familiar? The same could be said of "Dave's Wonderful Life" (above right - which isn't really Christmas themed, though it borrows liberally from Frank Capra's classic), which follows a depressed Dave who can't seem to get anything right. Instead of heading for the nearest bridge, though, he simply dreams of what the boys' lives would be like if he never existed. Plot holes aplenty in this one, but it's still mildly entertaining.

Presented on DVD by Paramount, this holiday-themed collection doesn't arrive with much flair: the technical presentation is rough around the edges, while a lack of bonus features doesn't help matters either. Still, the low retail price of this three-disc set helps to ease the pain, whether you're looking for a quick nostalgia fix or rounding out your Chipmunk collection. Let's take a closer look, shall we?

Presented in their original 1.33:1 aspect ratios, these episodes look about as average as most fans would expect. The 1990s-era episodes fare pretty well, featuring bold, crisp color palettes and relatively solid black levels. The others aren't quite as consistent: most sequences are generally soft and color saturation is a bit lacking, while mild edge enhancement and video noise are also noticeable at times. Digital combing is also a problem along the way, but that's almost expected for lower-profile animated releases. There isn't anything terribly special about this video presentation overall, but die-hard fans shouldn't consider it a deal-breaker.

The Dolby Digital 2.0 Stereo mixes fare slightly better, featuring decent channel separation and clear dialogue. The catchy music doesn't fight for attention, though it can't help but feel a bit flat at times; with this is mind, this audio is about as good as the source material will allow. No optional subtitles are included during these episodes, though Closed Captions are supported.

Seen above, the plain-wrap menu designs feature episode selection and handy "Play All" options. Each 22-minute episode has been divided into 4 chapters (the shorter ones are split into 2 or 3), while no obvious layer changes were detected during playback. This three-disc release is housed in a trio of standard keepcases and include one-sided promotional inserts. A somewhat sturdy outer slipcase holds everything together nicely.

Bonus Features
No extras have been included with this boxed set...unless you're counting the extra episodes, of course. The stand-alone release of "A Chipmunk Christmas" includes a bonus CD featuring the special's holiday-themed soundtrack, but it's not included here.
Final Thoughts

With roughly a dozen holiday-themed adventures to its name, the Alvin and the Chipmunks Classic Holiday Collection isn't a bad deal for fans of the franchise. The main specials are fairly consistent and most of the additional adventures carry their own weight, but Paramount's DVD package is fairly paint-by-numbers. The technical presentation isn't anything to write home about, proper bonus features are non-existent and even the Christmas soundtrack CD (included with the stand-alone yuletide release) isn't part of the deal. More casual fans of Alvin, Simon, Theodore and Dave may be better off seeking out individual collections, but this is a fairly economical way to get three decent releases all at once. Mildly Recommended.