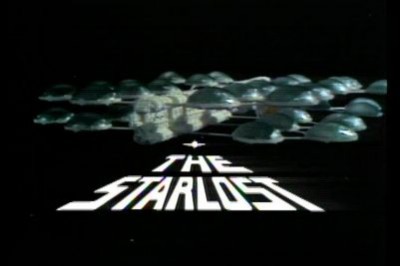 The Title and ship

Background: Harlan Ellison is one of the most important contemporary writers of science fiction (though the man despises the term, I feel safe from his repeated claims he'd punch anyone that belittled his work with the term). He has written numerous short stories, teleplays, and scripts over the years, always upset at how his vision is changed by producers, directors, actors, and the corporate suits that pay him quite well to churn out his futurist ideas (a lot better than ditch digging would have paid to be sure). 35 years ago, Harlan envisioned a grand project based on the idea that Earth was in decline, humanity all but certain to destroy itself within a generation due to social strife, the nuclear arms race, the oil embargo, and general distrust in government brought on by a host of factors. The belief that technology could answer all the questions raised over the years was waning, each advance bringing a whole new set of questions that stumped the brightest minds. Out of that mindset came the idea for a science fiction series that was pitched to network executives to use videotape (instead of the prevailing but more expensive film) to make a new series that would employ top people in their fields to make it based in science fact, a series I am now reviewing for you called The Starlost: Complete Series. 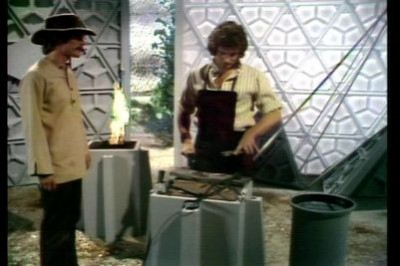 Series: The Starlost was about how society dealt with a huge disaster that wiped out Earth and made the planet unlivable in the year 2285. The specifics of what happened were lost in time but mankind saw it coming and a small segment of the population worked tirelessly to preserve a slice of life of the race in the form of a huge spaceship called the "Ark". Powered by nuclear reactors in an oblong body with dozens of circular spheres attached (much like those used on the movie Silent Running, the work of Douglas Trumbull who worked on both projects), the ship was reportedly a few hundred miles long, each dome consisting of a separate culture that was preserved (perhaps as established by the many who contributed to the original project wanting different types of society saved in the form of a compromise). Each self-contained dome was isolated form the other too, a small crew to man the ship as it sailed to other places in the solar system. Hundreds of years later in the year 2790, the story starts in earnest with a man in his prime finding his lot in life to be less than desirable, his name being Devon (Keir Dullea of 2001: A Space Odyssey). His community of called Cypress Corners and is modeled largely after an Amish concept with agrarian ideals and limited technology. He loves Rachel (Gay Rowan) and she loves him back but she is ordered to marry Garth (Robin Ward) as determined by the village Elders who run the community on strict terms laced with Biblical leanings. Needless to say, when the community banishes him, he takes off to find that he is on a large vessel sailing through space, the information about it lost to the generations of isolation. He goes back and grabs Rachel, the two set forth on an adventure to make a new life, Garth following them as ordered. 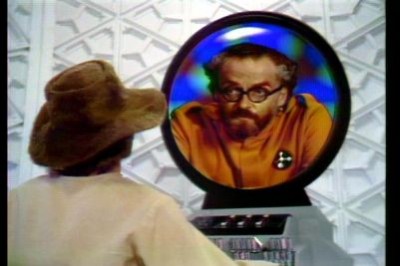 Devon finding out the facts!

In their travels through the massive ship, they find it is on a collision course with a star, their keen minds quickly absorbing the concept if not the specifics, assisted by a series of informational computers hosted by William Osler (amusingly playing the role in deadpan fashion). Not knowing where to turn to for help, they go to the bridge and find out that the crew is all dead and any expertise they need to restore the ship's engines is scattered throughout the place, even information depositories decentralized (presumably to protect the ship in the event of a meteor strike). The trio then move from one dome to the next, encountering cultures that have evolved (or devolved) without any contact from one another, the myth of Earth as unbelievable as idea they are on a spaceship to the various tribes, some quite primitive and others substantially more advanced but unknowing of the fate of the Ark. Like most television shows, this introduced the big picture theme of searching for those that could save the ship as well as the more immediate concerns of the trio constantly placed in danger (in one episode, The Goddess Calabra, Rachel is deified since women all died out long ago, the hinted at homosexuality pretty advanced for the time; or a few episodes guest starring Walter Koenig of Star Trek fame as an alien named Oro with intents on stealing the ship for the technology it possesses, the trio getting in his way). 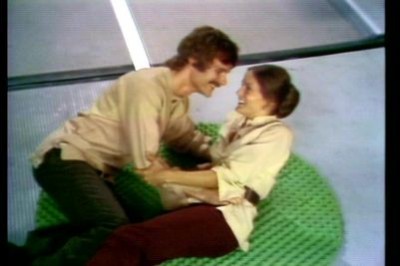 Since the syndication plan fell through before the series got off to a start, it was saved by the CTV (Canadian Television Network) and if you think some of the productions shot up north looked cheap in the 80's and 90's, this one was even worse, reminiscent of the 1960's versions of Dr. Who. The extensive use of videotape to shoot the scenes, the chroma key and models as the main special effects, and the wooden acting all hurt the project but it was Ellison's departure (and demand that his credits be replaced with "Cordwainer Bird" in disgust that anyone would have the audacity to change his work) that really broke this one down. Ben Bova was the science guru and Douglas Trumbull did what he could for the special effects but much of the writing (alternately rumored to be based on the outline by Harlan but casually tossed aside by flippant writers or high school students employed during what was then a huge union writer's strike much like the occasional one in the USA) was simply lame. Still, I remember the show fondly even if this DVD set dashes some of those memories pretty hard. Credit should be given for the restoration effort that went into the series, the 16 episodes getting especially loose toward the end of the run (Beehive dealing with the topic of the day back in 1973 of an ecological disaster resulting from killer bees and Space Precinct trying to make the show yet another "cops in space", a bad attempt at that). There were numerous glimmers of brilliance on hand too, guest stars including John Colicos, Walter Koenig, Barry Morse, Lloyd Bochner, etc., most of which overplayed their roles in what I would consider to be attempts at parody more than anything else. 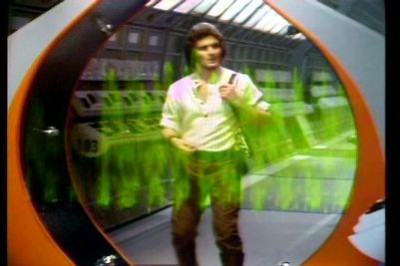 Ellison has received a lot of mileage by bashing the show and on its merits alone, however few there may be, the series is full of problems but I liked it when I was younger and as a supplement to syndicated episodes of Star Trek, the network release of The Six Million Dollar Man, and other shows of the era, I overlooked the issues to rate this as a Rent It on nostalgia as well as the parts of tried to get right. Granted, it started off slowly and some of you may enjoy the way various episodes were edited together to make television movies (I did not care for them as they always seemed disjointed) but it is pretty cool that shows as old and relatively forgotten as this one are now seeing the light of day thanks to dedicated companies like VCI Entertainment so check it out if you have the kind of fond memories I have of the show. 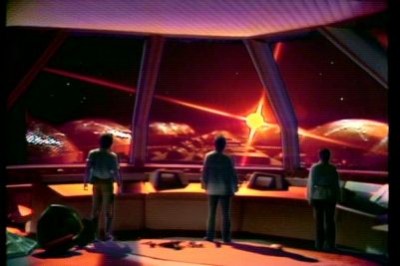 The trio on the bridge

Picture: The Starlost was presented in 1.33:1 ratio full frame color as shot 35 years ago for television on videotape (a rarity for such a show at the time). This version was encoded in MPEG-2 with a bitrate of around 5.1 Mbps, the resolution displayed in 480i for those that like the numbers. While the special effects looked extremely dated and low cost, genre fans have long been forgiving if the writing was up to par, that not being the case here except in limited episodes. The budget and resources devoted to the project were slights at the concept and the amount of time each episode director was minimal but in fairness, this looked a lot better than I thought it would considering the age of the source material. 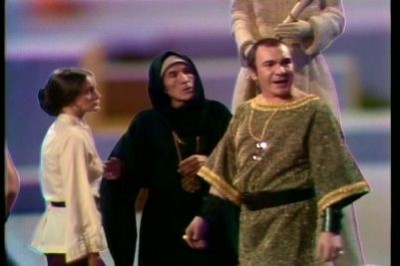 Rachel as a goddess in a Roman Empire flavored dome.

Sound: The audio was presented in a 1.0 Monaural English as originally shot, no subtitles or foreign language dubs provided this time. The dynamic range was limited and on occasion, background noises could be heard, but it sounded fairly decent considering the age of the source material and original budget. There was no separation of channels and I did not expect there to be but as home theater equipment advances in capabilities, it can be easy to forget that modern shows have a lot more sonic capabilities going for them (on average) that leave older shows in the dust. 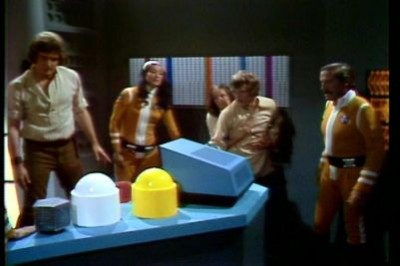 Extras: The best extra for me was the enclosed booklet that provided some production information about the show itself, the situation that led to the show ever airing, and some of the issues that resulted in it falling into oblivion. There was also a trailer to Dark Star (a classic cult hit) and a short marketing featurettes made to sell the show to affiliates (in black & white starring series lead Keir Dullea) but it was in decidedly poor shape.

Final Thoughts: The Starlost might be considered ahead of its time, the victim of corporate suits, or even the inspiration of numerous other shows that received more accolades, but it was definitely a product of the times it was produced in too. Some consider it a cult classic while others suggest it is so bad that it is "good", the kind of cheesy television show that one might have believed would never see the light of day again. I think all of those points of view have a little merit though, maybe a big budget remake movie would do the concept credit (more than most remakes of the modern era have done at least) but I still recall watching the show so many years ago and wondering about space travel; the strength of any idea being in how it opens up the imagination of those that embrace it, so forgive my generosity regarding this as a viable means of entertainment to a highly critical audience. The adventures of Devon, Garth, and Rachel as they set forth to repair an aging space ark full of the last remnants of a dead Earth with no background in even contemporary technology was more than the times would allow creative genius Harlan Ellison to explore but as bad as some elements might be, it is worth a look (or maybe a purchase if you find it on sale).