There's no denying that Christopher Nolan's The Dark Knight completely owned the summer of 2008, not to mention the hype-fueled months before it. Headlined by a penultimate performance from the late Heath Ledger (not to mention strong showings by Christian Bale, Michael Caine, Morgan Freeman, Gary Oldman and others), this action-packed follow-up to Batman Begins only edged the bar higher for big-screen comic book adaptations. Anticipation rose to a fever pitch after the untimely death of Ledger in January, but most critics and fans agreed that The Dark Knight delivered the goods, as evidenced by glowing reviews and record-setting box office receipts. It's become increasingly rare that any film succeeds on both levels, let alone a summer blockbuster...so until Nolan's next effort sees the light of day, it's unlikely that anything else will come close.

I'll admit that it took a few viewings until Batman Begins finally grew on me. Nolan and company were looking to fully reboot the floundering franchise, last seen in the abysmal Batman and Robin---and in just about every department, they succeeded admirably. Met with near-universal acclaim from fans of all ages, the darkly layered story re-imagined a few familiar faces...and introduced several new ones, of course. With a nod to acclaimed Batman classics like Frank Miller and David Mazzuchelli's Year One, Batman Begins wasn't just a one-man show: the Caped Crusader (Bale) was certainly at the heart of our story, but the rising career of James Gordon (Oldman) was also given room to breathe. Interesting character dynamics were introduced along the way (including a curious father-son relationship with the villainous Ra's Al-Ghul), offering parallels that aren't often seen in your average comic book movie.

The Dark Knight follows this pattern as well, broadening the strokes without getting too abstract. Here, we're fully introduced to The Joker (Ledger) and District Attorney Harvey Dent / Two-Face (Aaron Eckhart), who bring their own twisted morals and skewed identities to the table. This is undoubtedly a darker story than Batman Begins, mostly due to the central characters: The Joker is perhaps the most obvious example, whose chaotic personality makes him equally charismatic and repulsive. Despite my initial reservations, I can safely say that Ledger completely won me over as the twisted, psychopathic clown...and I'm sure I wasn't alone. Without taking away anything from the rest of The Dark Knight's stellar cast (including Maggie Gyllenhaal, who takes over for Katie Holmes as Rachel Dawes), Ledger is the unofficial scene-stealer many times over. Much like Anthony Hopkins in The Silence of the Lambs, his forceful presence can be felt even when he's not on-screen---and once he convinces Two-Face to take a darker path, the same can be said for that character as well.

More than just terrific performances, The Dark Knight is a truly dense story of crime and punishment, loss and redemption. The definitions of "hero" and "villain" are twisted even more than the Joker's own personality, allowing us to understand why Batman himself even needs to choose a darker path to succeed. Of course, a number of other elements help the layered story to flow smoothly, most notably top-notch production values, a strong score and a rock-solid script. There are times when The Dark Knight almost feels a bit too large for its own good---but these moments are few and far between, especially as the tricky third act unfolds during a series of chilling conclusions. The film's somewhat open-ended finale offers a perfect balance of resolution and uncertainty, ensuring that we're all eager to predict what may happen next. All things considered, the total package is certainly more than the sum of its parts, earning The Dark Knight a firm spot as one of the year's finest achievements in any genre.

Unfortunately, Warner's DVD treatment isn't quite as impressive as the film itself. Available in a multitude of formats (including separate one and two-disc DVD editions, as well as a Blu-Ray release), there are few issues that firmly prevent The Dark Knight from being a late contender for "Best of 2008" status, most notably a less-than perfect technical presentation and a slightly disappointing collection of bonus features. In other words, this 2-Disc Special Edition is still a somewhat formidable package...but it's far from the easy home run that it could've (and should've) been. Let's take a closer look, shall we?

Presented in its original 2.40:1 aspect ratio and enhanced for 16x9 displays, The Dark Knight looks somewhat uneven from start to finish. It's worth noting that unlike the Blu-Ray release, this DVD does not change aspect ratios during the scenes filmed in IMAX format*---but since the majority of fans only caught this in regular theaters (myself included), it's certainly not a deal-breaker. What does somewhat spoil the party are a few pesky digital problems, including occasional noise and mild edge enhancement. Digital issues aside, this is a decent transfer: black levels are rock solid, image detail is fine and the film's steely color palette has been preserved nicely. Though it's odd that The Dark Knight doesn't look as flawless as it should, only those with more sophisticated setups will find reason to complain.

* - Interestingly enough, the Digital Copy included on Disc 2 does change aspect ratios during the IMAX scenes (approximately 1.78:1), which gives viewers a chance to experience both framing options.

More impressive is the Dolby Digital 5.1 Surround mix, which is also available in 2.0 Surround. Like Batman Begins, there's plenty of dialogue and action, so it's good to know that these elements don't fight for attention along the way. Surround and LFE channels are used quite often, preserving the film's strong atmosphere from start to finish. Optional English, Spanish and French subtitles have been provided during the main feature and all applicable extras. 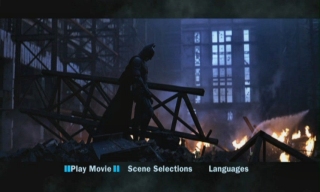 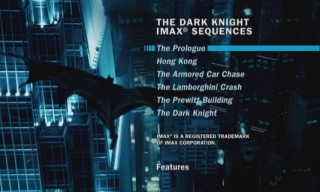 Seen above, the atmospheric menu designs are simple and easy to navigate. This 152-minute film has been divided into 39 chapters, while no obvious layer change was detected during playback. This two-disc special edition is packaged in a standard-width keepcase, which also includes an embossed slipcover and a Digital Copy code insert. A handful of alternate covers and steelbooks will also be available at various domestic and international retailers, so happy hunting!

Bonus Features
Surprisingly enough, there's very little of genuine interest here, as only a handful of extras have been collected on Disc 2. Leading things off is a pair of Behind-the-Scenes Featurettes: "The Sound of Anarchy" (6:25) offers a brief look at the score by Hans Zimmer, while "Evolution of the Knight" (17:34, below left) provides a more general look at the film's overall production. The latter includes glimpses of the redesigned Batsuit, the Batpod, a few key visual effects, the selected IMAX sequence and more. Unfortunately, there is much left uncovered: what about the Joker's makeup and costume design, Two-Face's ugly mug and Batman's "sonar" capability, for starters? With apologies to Marvel, my double dip senses are tingling...

Up next are The Dark Knight IMAX Sequences (6 segments, 36:42 total), a selection of scenes filmed in ultra-high resolution for selected IMAX theaters. Presented in their correct 1.43:1 aspect ratio (though cropped to 1.78:1 on the digital copy and left at 2.40:1 on Disc 1), these play fairly well on their own---but why not include an option to play these during the film itself, via seamless branching? Either way, it's good to see these on board in any fashion.

Our next extra is a collection of "Gotham Tonight" Newscasts (6 clips, 46:33 total, below right), originally released online for promotional purposes. Often peppered with footage from the film itself, these fictional reports also feature key cast members in character, taking calls from viewers or just conducting brief interviews. These are entertaining enough on their own terms, but it's doubtful that fans will return for future viewings...providing they haven't seen them already, of course. 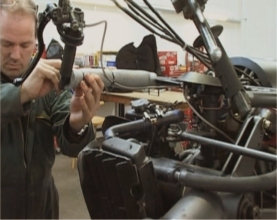 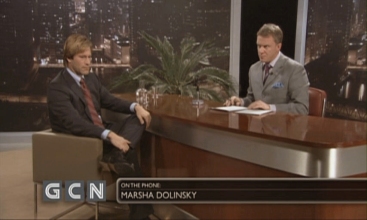 Winding things down is a Promotional Gallery with a serviceable collection of poster art and production stills. The former is much too small (in size and resolution) for its own good, especially since most of the promotional artwork is so provocative. Last but not least is a collection of Theatrical Trailers (3 clips, 5:33 total) for the main feature, including the vague teaser that was presented several months in advance. A more extensive look at the film's clever promotion (including the numerous "in-character" websites) would have been appreciated, but these will have to suffice for now.

Also included on Disc 2 is a Digital Copy of The Dark Knight. Though I normally don't bother with such extras, this one is somewhat valuable due to the aspect ratio format mentioned above. As another aside, it's also worth mentioning that a few additional featurettes have been withheld from this release and are Blu-Ray exclusives---and from a fan's standpoint, that seems a bit ridiculous.

All bonus features are presented in anamorphic widescreen when applicable---and unlike many of Warner's recent releases, all include optional English and French subtitles. It's great to see a major studio finally setting a good example, especially after such reluctance to treat extras with the same respect as the main feature. Here's hoping that this trend continues.

Batman disciples have waited patiently since summer for The Dark Knight on DVD---and for the most part, this 2-Disc Special Edition should satisfy fans of the film. Nolan's follow-up to Batman Begins plays well on the small screen, even though this DVD isn't without a few issues: featuring a mildly uneven technical presentation and only a handful of noteworthy bonus features (and substantially less than the Blu-Ray edition), this one's still guaranteed to sell like hotcakes as the holiday shopping season whips by. Budget-conscious fans will be satisfied with a rental until the inevitable "Deluxe Edition" surfaces, but most everyone else should find The Dark Knight worthy of an immediate purchase. Recommended with mild reservations.