Fox // PG-13 // December 2, 2008
List Price: $34.99 [Buy now and save at Amazon]
Review by Stuart Galbraith IV | posted December 17, 2008 | E-mail the Author
The X-Files (1998), also known as The X-Files - Fight the Future (used in all advertising but not in the film) is an entertaining, well-made but convoluted movie, spun-off from the cult sci-fi series that aired on Fox fromci 1993 to 2002. The film was produced mainly between the show's fourth and fifth seasons, and released between the fifth and sixth, picking up where the fifth season finale left off. For this reason the movie is ideally suited for X-Files fans, especially if you were an X-Files fan and caught the movie when it was new, and thus able to segue directly from the show to the movie. Those who've never seen an episode of The X-Files will still be able to enjoy it and follow it generally, though a good 10% (at least) will be totally lost on non-fans.

Some reviewer context is in order. I first caught the show around 1994, in reruns of the first season and just as the new season was commencing. Like many I found the series intelligent, scary, and darkly humorous, but over time it seemed to run out of steam. Partly this had to do with its so-called "mytharc" storylines, initially suggesting a top secret government awareness (and massive cover-up) of Roswell-type alien encounters. Over time that story thread evolved into a hopelessly complex, essentially irresolvable Chinese puzzle, the same sort of thing that eventually turned-off many fans of David Lynch's Twin Peaks. Toward the end of its run, star David Duchovny left the show, returning only sporadically thereafter, and episodes became increasingly outrageous, with the series teetering toward an Irwin Allen-esque decline.

The X-Files movie, however, was made near the peak of the show's popularity (if released after its apex) and has many fine elements. The Blu-ray disc, which includes both the theatrical release version and the negligibly "Extended Cut," is fine but generally unremarkable. 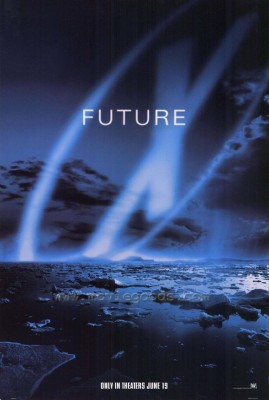 In 35,000 B.C., during the Ice Age in what would eventually become North Texas, a Neanderthal man encounters an alien creature in an ice cavern, and though the caveman successfully stabs the extra-terrestrial to death, it oozes a black, oil-like blood that infiltrates and consumes the caveman's body.

In modern times, at the same location, a group of schoolboys find the old caverns near their new subdivision. One of the boys climbs down into the tunnels, and encounters the same alien oil (one is tempted to add, "black gold...Texas tea") that similarly consumes him, turning his eyes opaque like John Agar in The Brain from Planet Arous. A trio of firemen climb down, and they're attacked, too.

Later, FBI agents Fox Mulder (David Duchovny) and Dana Scully (Gillian Anderson) are investigating a bomb threat in Dallas, in a sequence reminiscent of the 1995 Oklahoma City Bombing. Iconoclast Mulder, unhappy that his X-Files Investigative Unit has been shut down, insists on thinking outside the box by investigating the building across the street from the perceived threat, and in a scene too coincidental to be believed, he finds the bomb in a converted vending machine. Fox and Scully successfully evacuate the building seconds before the bomb obliterates it.

Later however, back in Washington, Mulder and Scully are made the fall guys when it's learned that four victims remained in the building: a schoolboy and three firemen. Mulder is tipped off by a doctor/doomsday author Alvin Kutzweil (Martin Landau) that the four bodies were already dead, that the bomb was part of a larger plot to destroy evidence of an alien virus. (Why the powers-that-be would choose so spectacular and public a means to destroy evidence is left unanswered. Whatever happened to cement shoes?)

The discovery of alien-mutated corpses eventually send Mulder and Scully on a globe-trotting effort to stop the alien virus before it can be launched, apparently with the aide of The Syndicate, the secret government group including such familiar characters from the show as the Cigarette-Smoking Man (William B. Davis) and the Well-Manicured Man (John Neville). In the movie Armin Mueller-Stahl also appears as Conrad Strughold, its leader.

The X-Files is not a cheap TV spin-off like Munster Go Home! or McHale's Navy Joins the Air Force. It reportedly cost somewhere in the neighborhood of $66 million, and the money is up there on the screen. The climax takes place in Antarctica, in a massive man-made laboratory with a humungous UFO buried under it. It's all quite spectacular, visually something more along the lines of an Alien movie than an episode of the TV X-Files.

The story is involving, interesting, and frequently suspenseful. Duchovny's deadpan character, both nerdish and cool at once, wears a bit thin in a feature film; he so inexpressive, at least in terms of his facial expressions, that he becomes rather remote. I had also forgotten that the series, when it debuted in 1993, was one of the first in which its characters constantly used cell phones. This added to their hip, technologically up-to-the-minute stylishness, but now this constant cell phone use just seems silly.

The biggest problem with The X-Files is that in its paranoiac telling the audience has a hard time telling exactly what's going on much of the time. The general thread of the plot is relatively easy to follow, but myriad details, some of which may be more clear to loyal fans of the series, are lost.

Still, the film hums along pleasingly and doesn't overstay its welcome. And even when you're not sure what's going on, the film's set pieces are colorful and suspenseful, like one about mid-point through the film, which finds Mulder and Scully chasing tanker trunks through the middle of nowhere. They eventually stumble upon a secret laboratory where Africanized bees are being housed and released. I still don't fully understand why the bees are there, and why they're being released into the wild, but the sequence is interesting nonetheless.

Filmed in Super 35, the 1080p, 2.35:1 presentation of The X-Files is generally good, with a pleasing amount of film grain and without any apparent DNR. Ward Russell's cinematography vaguely reminded me of the look of both early '70s sci-fi films and mid-'70s conspiracy thrillers (The Parallax View, etc.), though that may have been unintentional. In any case, the refreshing use of "older school" miniatures and latex creatures grounds The X-Files in a reality lacking in CGI-heavy films of recent years, and the transfer shows the work of these artists and artisans to good effect.

The differences between the Theatrical Cut and the Extended Cut appear to be minimal, not more than a minute or two of footage that's more hype than substantive, more sizzle than steak. The disc takes a while to load, and ironically for a series/movie about FBI agents and a shadow government, there's what feels like an endless parade of FBI and Interpol anti-copying warnings. Boo!

The 5.1 DTS-HD master audio is strong, with a pleasingly contemporary mix that doesn't go overboard. 5.1 Dolby Digital tracks are available in French and Spanish, with subtitles in English, Spanish, Korean, Mandarin, and Cantonese. The feature is Closed-Captioned, but not so the special features.

Though somewhat repetitive, the supplements are pretty good, and Fox deserves credit for consistently adding new high-def features to its Blu-ray catalog titles. The X-Files's extras include two virtually identical audio commentaries and making-of featurettes. The original 1999 audio commentary with director Rob Bowman and producer-writer Chris Carter is here, along with a new one also featuring Bowman and Carter, as well as producers Frank Spotnitz and Daniel Sackheim. The main difference here is that the new commentary is optionally viewable in picture-in-picture form via Bonusview, which some older players can't handle. Fortunately, the new commentary defaults to audio only in those cases.

Blackwood: The Making of 'The X Files' is a new featurette in high-def that's awfully similar to a 1999 one that's also included. The new short cobbles raw, SD interview footage from the older show, cutting it with HD clips from the movie and HD stills. (Best line comes from Martin Landau, talking about the difference between the show and the movie: "It's like going from a Quarter Pounder to a, uh, a Half Pounder.") The older short is different mainly in that it presents extensive clips from the television series.

Other featurettes on the visual effects and scoring, a short but amusing gag reel, and an alternate bee sting scene are in full high-def. Also included are a set of three trailers as well as one for the recent The X-Files - I Want to Believe.

The disc is enhanced for D-Box Motion Control for those with those systems. (I don't have one, though this seems like a good movie for that format.)

Though it's really a movie for the fans, I found The X-Files fun and exciting entertainment that brought back fond memories of the show in its early days. It also made me much more curious about The X-Files - I Want to Believe, which is probably the whole point of this disc. Recommended.