She left for college and terror followed.

The Boogeyman series is a curious entry in the horror film pantheon as it's one of the few franchises where the direct-to-video sequels are better than the theatrically released original. Boogeyman 3, soon to hit the video markets thanks to Sony, is a direct sequel to the previous two movies. As such, this review contains some spoilers for Boogeyman and Boogeyman 2. If this matters to you, well, you've been warned.

Boogeyman was shown in theaters back in 2005. In a nutshell, it involved a young man named Tim (Barry Watson) who returns to his childhood home to confront a spectral boogeyman that may or may not exist in his bedroom. A pre-Bones Emily Deschanel tags along as Kate, Tim's childhood friend and romantic interest. The film was critically derided, and it doesn't seem to have a good reputation even among horror movie fans. I always thought its reputation was a tad undeserved - it's not the best of fright flicks, but it had its moments.

Sony, however, must have seen the possibility for a few more dollars with the idea; thus, to the surprise of many, Boogeyman 2 saw the light of day on home video about a year ago. To further the surprise, it wasn't half bad. In this go-round, a young woman named Laura (Danielle Savre) checks herself into an asylum as she's suffering from similar fears as Tim from the first film. At this asylum is the brooding Dr. Allen, who just so happens to have treated Tim. The titular Boogeyman begins offing the young kids at the asylum, capitalizing on their fears in a scenario similar to A Nightmare on Elm Street 3: The Dream Warriors. Boogeyman 2 benefited greatly from the presence of Saw's boogeyman Tobin Bell, who brings a lot of menace to the horror films he appears in. Boogeyman 2 must have been a small success as a year later, Sony now has . . . 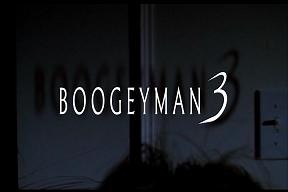 Boogeyman 3 picks up roughly a year after the events of Boogeyman 2. Dr. Allen was murdered at the end of Boogeyman 2, and his daughter, Audrey, is doing her best to cope at college. Unfortunately for Audrey, she begins reading her father's personal journal and subsequently begins to be attacked by the spectral boogeyman of the first film (Boogeyman 2 changed things up a bit with a human behind the boogeyman killings). Audrey reaches out to her best friend Sarah (Erin Cahill), a psychology student who also handles a radio call-in show with one of her professors. Sarah can't do much for poor Audrey, though, and the girl hangs herself. Or, so it appears. Sarah begins to uncover the secrets of the boogeyman from Dr. Allen's journal as her friends are killed one by one by the specter.

Boogeyman 3 is clearly a cheap direct-to-video sequel designed to cash in on whatever name-recognition the Boogeyman franchise offers. And like its immediate predecessor, it's much better than one would think. Erin Cahill is attractive, and her character is written intelligently enough to make her a respectable horror film heroine. The college setting - while not quite realistic - is capitalized upon well, reminiscent of the first two Urban Legend movies. The dorms offer claustrophobic settings for the cast to be terrorized in, and their death scenes are efficiently bloody and scary, which should please the spookshow crowd. Boogeyman 3 could have been a standard rehash of its predecessors, as a lot of direct-to-video sequels are, but I give writer Brian Sieve credit for coming up with a clever spin on the central idea and an original resolution.

What Boogeyman 3 failed to capitalize upon was the chance to return actor Tobin Bell to his role in Boogeyman 2. The characters turn to Dr. Allen's journal several times over the course of the movie, and Allen's narration is delivered by some anonymous guy who doesn't sound a thing like Bell. Couldn't the producers have shot some narration and flashback scenes with Bell for this movie? I kept thinking that the movie could have derived some energy from his presence.

In any case, Boogeyman 3 is no great shakes, but it's an acceptably gruesome cheap horror film. Recommended. 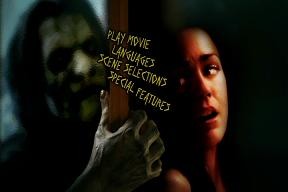 Sony gives Boogeyman 3 an anamorphic widescreen presentation with a 1.85:1 aspect ratio. All around, the video quality was good but not great. Colors were strong; details could have been stronger. Some light video noise is present too.

Boogeyman 3 arrives with two language tracks: English and French. Both are Dolby Digital 5.0, with the English language track being the default. It's a great-sounding track, with dialogue, sound effects, and the score well-mixed.

Optional subtitles are available in English, French, and Spanish. 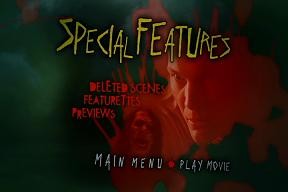 Trailers precede the main menu for Vacancy 2: The Final Cut (and by extension, Vacancy), The Grudge 3 (and again by extension, The Grudge and The Grudge 2), and The Messengers 2: The Scarecrow (and one more time, by extension The Messengers). Notice a pattern in Sony's promotional campaigns with horror film franchises? These trailers are also available individually via a Previews link in the menu system.

Finally, two deleted scenes may be viewed: Radio Station (1:34) and The Monitor (1:02). They're not essential viewing, but nice to have if you're curious about what was left on the cutting room floor. These deleted scenes are in anamorphic widescreen, but the three featurettes are not.

Like its predecessor Boogeyman 2, Boogeyman 3 is better than one would expect from a cheap horror film sequel released direct-to-video. It takes a new spin on the franchise and offers enough supernatural hokum and bloody scares to warrant a recommendation.