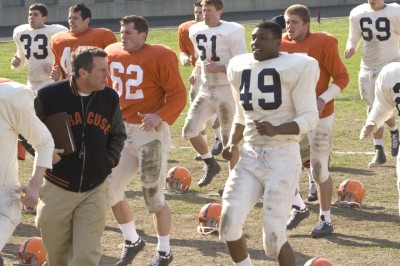 An uplifting historical sports drama primarily concerning racial injustice? Indeed, "The Express" won't win any awards for originality, but it has heart, a big one actually, and tells the story of a man who overcame the trial of racism to influence the world of football with his monumental gifts. "Express" conquers formula by keeping a close eye on pace and giddy, audience-baiting moments of gridiron triumph.

Emulating his hero Jim Brown (Darrin Dewitt Henson), young Ernie Davis (Rob Brown, "Finding Forrester") decided to take his football skills to Syracuse University in the late '50s, under tight coaching from Ben Schwartzwalder (Dennis Quaid). While his talents shine immediately, the racial climate is less kind, leaving Davis the object of scorn throughout the south, yet still remaining a hero to many due to his flair on the field. Rising to the top of the league, Davis found fame, winning the Heisman Trophy in 1961, with the promise of a marvelous pro career ahead of him. While mentally ready to achieve his goals, Davis's body had other plans, much to his frustration and Schwartzwalder's disappointment.

"Express" is a tightly paced football story that, again, has arrived after a plethora of similarly-themed tales of skin-color woe have been reheated and served up. However, the Davis story is not one to dwell on cartoon presentations of antagonistic behavior (typically of the southern variety). No, "Express" is here to inspire and to study inspiration, examining Davis's ride to college football fame initiated by his gifts and the sporting leadership provided by the legendary Jim Brown.

Director Gary Fleder holds a reverent tone toward Davis, boiling down his setbacks to obvious standoffs of race and competition. I was surprised how much football remains in "Express," as the film details Davis's highlight-reel career and his famous contributions to the racially-charged 1960 Cotton Bowl (held, of course, in Texas). Wonderfully played by both Brown and Quaid, the relationship between Davis and Schwartzwalder is the cornerstone of the film, with both characters learning from each other and growing as Davis finds fame beyond his wildest imagination, and the coach hits a winning streak that solidifies his eye for talent. The combative, faintly loving relationship goes a long way to creating tension both on and off the playing field.

Because Fleder is wrapped up in football and the conflicts surrounding Davis's every move, "Express" actually peddles briskly, unlike many of its lethargic brethren, powered in great part by Mark Isham's triumphant score. Of course, a rounded overview of Davis's life is sacrificed to broad moments of triumph and tragedy, leading to a few questions of romantic entanglement that remain unanswered; however, the film's central theme of encouragement is a buoyant one, trumping the thinness of the depiction and cinematographer Kramer Morgenthau's tacky lighting design (the picture resembles a subpar Oliver Stone film), two elements that take away from the ultimate emotional impact.

Presented in anamorphic widescreen (2.40:1 aspect ratio), Universal only takes the DVD image quality halfway to glory. While safeguarding the film's grainy, period aesthetic, the rest of "Express" has some difficulty rising above a muddy transfer, with the desaturated cinematography unable to break free from often disappointing black levels. It's not a deal-breaking visual experience, but not as remarkable as it should've been.

With sporting heroics and stadium atmospherics, "The Express" has the benefit of a robust 5.1 Dolby Digital sound mix to help power the film in the home theater environment. Dialogue is crisp and easy to discern, and, with some choice soundtrack cuts, the bygone era is romantically evoked. A nice bass-punchy football feel makes up the rest of the picture, leaving body hits to smack the track around. A Spanish 5.1 mix is also available.

A feature-length audio commentary with director Gary Fleder is a calm and collected encounter with a focused filmmaker who communicates a surprising amount of love for his motion picture. Fleder is a technical speaker, exploring cinematographic intent, performance durability, and his fear of losing the audience. Talk of editorial experimentation is fascinating, along with Fleder's healthy filmmaking vocabulary. It's a great track that extracts new flavors from "The Express," even if Fleder sounds half-asleep.

"Deleted Scenes" (7:38) observes new trials of racism, belabors an omen, and explores Davis's hospital stays and strength of spirit. They can be viewed with or without commentary by Fleder.

"The Making of 'The Express'" (13:59) is a routine BTS journey, though nicely augmented with on-set footage showing Fleder and the cast at work. Lively talk of difficult period recreation blues also rocks the mundane promotional boat.

"Making History: The Story of Ernie Davis" (13:19) sits down with friends, family, and sporting luminaries to reminisce about Davis and highlight his thumbprint on football history. A conversation with Jim Brown makes this featurette a must-see opportunity, while the rest of the program gives a kind overview of Davis and his accomplishments.

"Inside the Playbook: Shooting the Football Games" (7:01) rolls BTS and film footage while Fleder and football coordinator Allan Graf appear in commentary form to explain their gridiron motivation.

"From Hollywood to Syracuse: The Legacy of Ernie Davis" (5:20) is more Davis worship, only here the focus is on shooting in his footsteps, with Syracuse students and faculty divulging their filming experience and alumni honor.

A Theatrical Trailer has not been included on this DVD.

There appears to be plenty left to learn about Ernie Davis and his illustrious career, but "The Express" nails the pulse of his life just right, incorporating his confidence, leadership, and exasperation into an engrossing, if not exactly groundbreaking, feature film.