Sony Pictures // Unrated // February 3, 2009
List Price: $19.94 [Buy now and save at Amazon]
Review by Stuart Galbraith IV | posted January 26, 2009 | E-mail the Author
Confusingly, pointlessly labeled 5ive on the packaging - your local Best Buy schlub will enjoy hunting that one down for you - the name of the film and the title onscreen is definitely Five (1951). Sony Pictures Home Entertainment is also pointlessly marketing the film as one of its pseudo-hip "Martini Movies." And yet I don't care. Among '50s sci-fi titles, this ambitious little low-budget effort from radio producer Arch Oboler has up to now been almost impossible to see. It's almost never shown on TV, and this DVD marks its first-ever official home video release. Better still, it turns out to be a much better movie than its reputation would suggest. 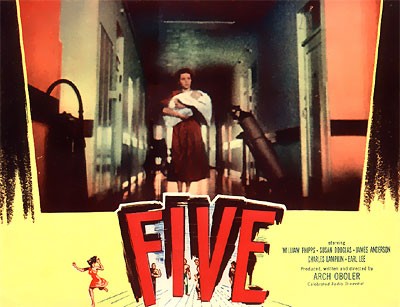 Five is historically significant. It's the first movie to depict a post-nuclear holocaust world, and probably the first to show the aftereffects of widespread radiation poisoning. Producer, director, and co-writer Arch Oboler had gotten his start on radio while still in his teens, famously creating the horror anthology Lights Out!. Most of his movies were unusual: in Strange Holiday (1945), for instance, a man (Claude Rains) returns home from a camping trip to find that the United States has been taken over by fascists; in The Twonky, a social satire, Hans Conried plays a professor whose life is turned upside-down by a walking television set from the future. Oboler's biggest success in the movies was Bwana Devil (1952), the first 3-D feature of the 1950s, a film that not only launched the brief craze for "depthies" during 1953-54, but also indirectly fueled the move toward wide screen and stereophonic sound. If he were alive today, Oboler would fit right in today's television market, as shows like 24 and Lost have the same gimmicky qualities.

Though still regarded as a radio pioneer, there's little demand for Arch Oboler Film Festivals because most of his movies are pretty terrible. The Bubble (1966), also in 3-D, is like a really, really long and boring episode of The Outer Limits, though its odd narrative style is mildly involving. Strange Holiday is quite interesting, but The Twonky is very bad, almost unwatchable.

Up to now Five has been lumped into this group of unusual but not good stunt films. Bill Warren, in his seminal Keep Watching the Skies!, describes Five as earnest but pretentious, ultimately amateurish and unbelievable. But I found it impressive on many levels and overall superior to similar but more expensive films like The World, the Flesh, and the Devil (1959).

"A story about the day after tomorrow," Five opens with a nuclear explosion, followed by dark clouds of radiation shown swirling around London, Moscow, Paris, and other major cities. (These are the only effects shots in the entire picture.) A pregnant woman (Susan Douglas [Rubes], now a highly respected figure in Canadian theater) wanders the California wilderness, eventually coming upon a small, secluded house. There the woman, Roseanne, meets Michael (William Phipps), a recent college graduate with a degree in English literature. In the weeks following the apparent end of the world he's amassed a lot of supplies and is living in relative comfort.

Not long thereafter two more survivors show up: an old banker, Barnstaple (Earl Lee) so shell-shocked by the apocalypse he thinks he's merely on a vacation, and Charles (Charles Lampkin), a black doorman from the same bank. Barnstaple becomes sick with radiation poisoning, so the others take him to the beach where a fifth (5ifth?) survivor is discovered, Eric (James Anderson), a mountaineer.

Five is impressively adult. It's a grim drama, one of the bleakest American-made movies about the dangers of nuclear weapons until TV productions like The Day After and Testament paralleled the growing anti-nuclear movement of the early-1980s. The absence of stars and character actors familiar to 1951 audiences adds to its realism, as does the stark cinematography (with lots of probing, extreme close-ups), closer to Visconti's La Terra trema than Roger Corman's Day the World Ended. The use of Oboler's own home ("actually a guest house on his property" helpfully notes Tom Weaver), a small visually interesting dwelling, designed by Frank Lloyd Wright no less, adds to its unusualness. The house itself almost becomes a character. (At last report the Arch Oboler House had fallen under hard times but there were plans for a major restoration.)

One of the problems of later, bigger-budgeted movies about the end of the world, notably The World, the Flesh, and the Devil and On the Beach (1959) was their unwillingness to realistically show what a post-nuclear holocaust world might look like. Most glaring was the complete absence of corpses in these films; if everyone's dead, where did all the bodies go? In those films they simply vanished, but in Five bodies are all over the place. (What is actually shown is little more than clothed skeletons, but the camerawork implies corpses with the flesh rotted away.)

Early in the film, Roseanne wanders through a realistically decayed small town (a headline reads, "Savant Warns Against New Bomb Use"), and later on, she and Eric venture into downtown Los Angeles, which is filmed very imaginatively for such a low-budget film. Partly to hide moving vehicles, etc., the sequence is told subjectively, from her point-of-view as she looks up at unoccupied buildings, her eyes darting around, looking for any signs of life. (Spoilers) Eventually she finds the building where her missing husband worked, hoping against hope that he might somehow still be alive. This sequence, of her making her way through the corpse-strewn building, is more disturbing than anything in, say, The Omega Man and may have been an influence on filmmakers like George Romero. (The character of Barbara in Night of the Living Dead plays like a not very successful variation on Roseanne.) Released during the height of Cold War paranoia, Five's stark visuals and bleak story probably traumatized its unsuspecting audience.

Some have described Five as pretentious, but it's got nothing on The Noah. Five's characters are all in various stages of shock and mourning, and their dialogue amongst one another is minimal and realistic. The cast, all busy character types prolific in low budget films and especially television, also realistically look disheveled - Roseanne wears no makeup for most of the film, while Michael grows a scraggly beard and lets his hair go. Douglas, Phipps, and especially Lampkin are excellent, delivering extremely compelling performances of impressive immediacy - they don't seem like "movie" characters at all. Unfortunately, James Anderson's Eric is exactly that: his racist, materialistic, selfish killer is like something out of a Lippert noir, throwing the rest of the picture off-track, and didn't really need to be in the film at all. (And they still could have called it Five! See the film.)

Adding enormously to Five's reappraisal is the fact that Sony's transfer is razor sharp; the film looks like it was shot yesterday. Detail and contrast are extremely good, too much so in a few cases. (Anderson's toupee is extremely obvious in this release, while in one scene boxes of "Atomic Suds" detergent clearly are redressed boxes of Tide.)

Presented in its original 1.37:1 standard size format, the black and white film suffers only from dirt and other muck left in the film gate during filming. (This had to have been shot fast, probably 15 days or less.) There's a single shot during the climax, when a crucial line of dialogue is spoken, that's ruined because the film derailed in the camera, resulting in an incredibly jittery image for that one shot. I wish Sony had fixed that; it would have been fairly easy to do. The mono sound is decent enough, in Dolby Digital mono only, with optional English subtitles and closed captions.

The only real supplement is a trailer, which sells the film as a conventional thriller. My nominee for this year's Least Special Special Feature is the disc's Martini Minutes: "How to Become a Villain" and "Secrets of Deceptions." These are nothing more than 90-second ads for other "Martini Movie" titles, spoiler-filled film clips you'll want to avoid.

Five has gotten something of a bum rap over the years, but hopefully this sparkling new DVD will change some people's minds. Highly Recommended.