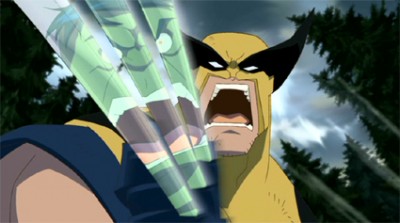 The direct to DVD animated Marvel line has become something of a staple for comic book fans over the past few years. Since Ultimate Avengers came out back in 2005 we have seen Dr. Strange, Iron Man, and, well, even more Avengers. Now it's the Hulk's turn to have his chance at an animated feature, but his release is slightly different from the other ones. Rather than present a full-length movie, Hulk Vs. cuts the Mean Green Machine's tale down into two separate halves: Hulk vs. Wolverine and Hulk vs. Thor.

In the comics we've seen these scenarios play out countless times before, and quite frankly the Hulk is Marvel's problem child. How many characters has he gone toe to toe with over the years? Even Wolverine and Thor's stories here feel a bit old hat for comic book veterans, but both films seem to realize that. Their approach to the subject matter is more fan-service than an attempt to tell a new story or make a next generation of Hulk lovers. Granted there are fresh elements in both, fresh ideas have been injected into it, and liberties have been taken to shake things up a bit. While it's not a perfect release by any stretch of the imagination Hulk Vs. is one of the better efforts to come from the Marvel Animation line. It's light, fun, and full of action with just enough solid comic mythos to please even the staunchest of fans. 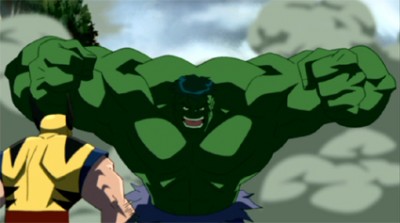 Hulk vs. Wolverine is the first and fastest of the two films included here. It starts out with Wolverine coming to in the middle of a large crater and pondering how he got there for a moment. That's when the Hulk appears and we get a nice little flashback that brings us up to speed. It's worth noting that this is one of Wolverine's first missions for Department H, which takes place before he joined the X-Men. From there the film takes some unpredictable turns as both Wolverine and the Hulk are incapacitated by members of Weapon X. That's right kids, rather than square off against Wendigo as they do in the comic version of the story our heroes take on Sabertooth, Deadpool (who brings a lot of humor), Omega Red, and Deathstrike.

As much as I appreciated seeing these villains from Wolverine's past, the Weapon X element of the film felt a bit out of place. I suppose it could easily tie this plot in with the upcoming movie, but considering it's not really given context here it is a little jarring. Those who are unfamiliar with Wolverine's past won't get nearly enough explanation to have it all make sense, so you really have to know what's going on prior to sitting through it. The Weapon X angle also takes away from the Hulk versus Wolverine storyline. Considering both characters are given a common enemy they are distracted temporarily, and ultimately there's simply too little of its namesake. 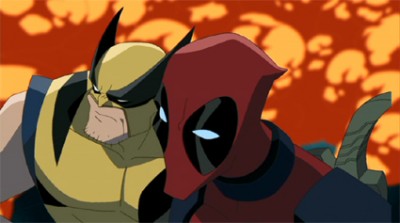 In Hulk vs. Thor the plot is a little more calculated and it feels balanced by comparison. Rather than being tossed right into the action the second feature here begins with Odin's winter sleep, which signifies conflict in Asgard as the forces of evil rise up to take down the citadel of the gods. This time around things are kind of different because Loki has devised a plan to bring the Hulk from Midgard and unleash him on Thor and the gang. With some help from Amora he separates Bruce Banner from the Hulk's soul, leaving the creature unhampered by the control his human counterpart introduces. With the cap off the Hulk is free to unleash his rage across Asgard, which of course means Thor gets a nice round of face-pounding.

One of the joys of Hulk vs. Thor was watching the monster tear his way across Odin's world. Nothing can stand in his way and there are many outstanding moments and fight scenes peppered throughout the film. The plot also feels more robust with some climactic moments and plenty of surprises. This helped it feel more complete than the Wolverine story and even though Thor's tale is slightly longer, it maintains a stronger pace. 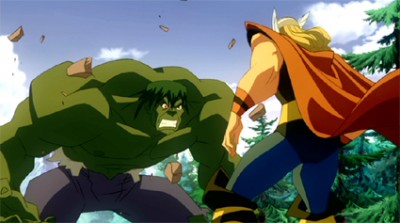 The two halves have nothing to do with each other and if you're looking for a straightforward Hulk movie you're going to be disappointed. The Wolverine story is the more haphazard of the two with a focus on action over plot, while the Thor film provides slightly more balance and looks more at Banner's character. With that being said Hulk Vs. is a fun title that will keep fans of the character and comic book geeks happy enough. It's definitely worth checking out and in my opinion it's one of the most enjoyable entries in the Marvel animated line. It's not perfect by any stretch of the imagination, but it leaves the door open for other Hulk Vs. sequels.

Both films in the DVD release of Hulk Vs. are presented with a 1.78:1 anamorphic widescreen transfer. The production looks solid enough with vibrant colors, smooth animation, and designs that do justice to the characters and world. The quality of the DVD is sharp as well with crisp visuals, vibrant colors, and smooth lines. Some interlacing can be spotted here and there, and it's kind of distracting at times. Grain also has a minor presence throughout this release, but thankfully there are no compression artifacts. Overall this is a solid production with a transfer that has a lot going for it, but isn't exactly flawless.

Hulk Vs. is presented on DVD with 5.1 Dolby Digital mixes for English and Spanish. The dub quality is fantastic all around with some great talent such as Steve Blum, Bryce Johnson, and Fred Tatasciore. Quite honestly the whole cast does a great job and there isn't a bad role in the bunch. Because of that each story packs a nice amount of weight that is enhanced by the orchestral score and solid presence on the soundstage. The rear channels pick up a great amount of the action and the bass is appropriately balanced without being overbearing. 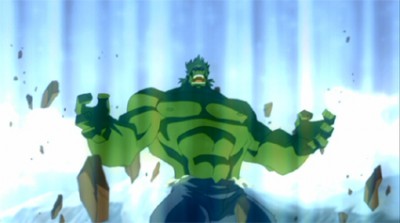 Each of the features on this two-disc release come packed with their own bonus features, and there's quite a bit to go through.

Hulk vs. Wolverine features two audio commentary tracks, each with their own qualities that they bring to the table. The first track features Craig Kyle and Chris Yost talking about the film as they watch it and reliving some of their experiences during the production. It's interesting enough and there's some nice background information. The same can be said for the second commentary track with Frank Paur, Kevin Altieri, and Butch Lukic. These guys discuss more of how the film came together rather than what's happening on screen. All around both commentary tracks are highly informative and offer plenty of insight from multiple perspectives.

Once you're done listening to the commentaries the rest of the features are fairly straightforward. There are some trailers for other Lionsgate releases as well as a six minute look at the upcoming Wolverine and X-Men film. An eight minute Comic-Con panel is also included here with some interactions between the creators and fans. It's fun, but nowhere near as interesting as "This Is Gonna Hurt: The Making Of Hulk Vs. Wolverine" (20:09) which is a behind the scenes look at the show. Like the commentary tracks this feature provides a lot of background on the film, but it includes interviews with both the production crew and the acting cast. 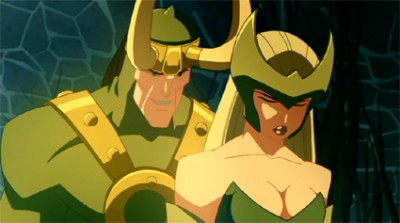 Hulk vs. Thor offers much the same in terms of supplemental content. Once again Craig and Chris come together for an audio commentary, and a second is included with Frank along with Sam Liu and James Peters. The tracks are just as interesting and informative as the ones found on the Wolverine disc, so they are definitely worth checking out once you're done watching. Some trailers appear here again as well as a teaser for the upcoming Thor- Tales Of Asgard.

The meaty bonus features include "Of Gods And Monsters: The Making Of Hulk Vs. Thor" (18:24). Again this featurette packs in personal thoughts on the project, how the film came to be, and overall impressions of the final product. Rounding out the feature set is "Jack Kirby and Thor" (4:46), which looks at the legend of Kirby and how he influenced Thor and comic books in general. They also talk about some of the inspirations that made their way onto this movie as well. 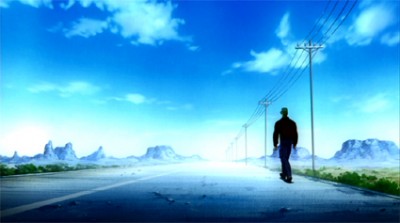 The latest Marvel Animated feature is a solid effort all around with high production values, quality animation, and decent stories. Both bring something different to the table and they compliment each other with what they lack. Wolverine lacks development and plot, but makes up for it with intense action and some character history. Thor tones down the violence a bit to allow a fuller story that works Banner's character into the fold better. The end result is one of Marvel's best animated efforts and even though it's not perfect, it's a must see for comic book fans. Consider it strongly recommended.