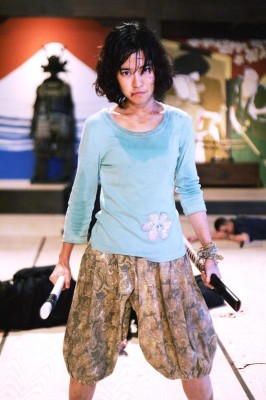 Even armed with knowledge of the extravagant oddity contained within "Ong-Bak" and "Tom yum goong" (aka "The Protector"), "Chocolate" still manages to astonish with its bizarre behavior. The latest release from Thai action ace Prachya Pinkaew, "Chocolate" is another martial-art barnstormer, indulging the sort of bone-smashing escapism the mind desires every now and again, only this time the production is asking for a little more sympathy to go with the toe-curling display of pain.

An autistic girl with extraordinary reflexes and martial-art ability honed on a steady diet of "Ong-Bak" viewings and backyard observations of a Muay Thai academy, Zen (newcomer Yanin Vismistananda) has been raised to rely on her mother Zin (Ammara Siripong) and adoptive brother Moom (Taphon Phopwandee) for support while she sits in silence. When Zin falls behind on her medical bills after a bout with cancer, Moom discovers a book of debtors carefully hidden away, revealing a huge amount of money waiting to be collected, along with Zin's shadowed past as the wife of feared Thai thug No. 8 (Pongpat Wachirabunjong), who long ago broke up an affair between Zin and Zen's biological Japanese father. Hoping to collect on the cash owed, Zen and Moom travel around the city meeting with the deadbeat borrowers, only to find hostility that only Zen's way of the fist can tame.

I would never claim "Chocolate" to be a wonderful cinematic accomplishment, nor could I follow the extreme turns of the plot barely explained by Pinkaew and the screenwriters. There's really no consistency to the film that's refined enough to celebrate its artistic achievements. Instead, "Chocolate" is pure gasoline; it's a barely contained martial arts demonstration that takes great pride in dreaming up new and exciting ways to split heads open. It's a formula that worked beautifully for "Ong-Bak" and "Tom yum goong," and the success rate continues here, despite plenty of obvious reservations.

Missing is Pinkaew's previous collaborator, the great Tony Jaa. His replacement is Vismistananda, a comely bruiser who excels at Gumby-flexible destruction, implemented under the tight vision of fight choreographer Panna Rittikrai. Indeed, the feminine perspective is mined well by the director, who attempts to strip the material of traditional nobility and spiritual awareness and replaces the loss with syrup, in the form of cheap sentiment. It's a shortcut to make Zen autistic and Zin a cancer patient, forging any natural emotional movement to zero in on plastic sympathy. However predetermined the course, Vismistananda is a striking screen presence, and her determination as Zen helps "Chocolate" overcome its lazy scripting. Her squealing passion is the best antidote to the soap opera intent of the film.

Thankfully, Pinkaew is aware he's not making "Rain Man" and often puts Zen in goofy situations she needs to kick her way out of. Sure, the Seagalesque nature of the story is repetitive, often placing Zen in a room with a hornet's nest of clueless, gunless henchmen, but the payoff is spectacular, with Zen beating the stuffing out of debtors at an ice factory, a slaughterhouse, and a candy company. The choreography is outstanding, pushing Vismistananda to the limits as she works the room breaking legs, arms, and in the case of this critic, a heart. Pinkaew knows how to capture the traumatic magic, offering photography that's never intrusive and amazingly respectful of Muay Thai traditions, while offering his own tributes to Bruce Lee and Tony Jaa during the picture.

Looking like a DVD taped off a basic cable network, "Chocolate" doesn't offer a visually stunning experience. The anamorphic widescreen (1.78:1 aspect ratio) presentation is riddled with murky black levels, muted colors, EE, and print defects, taking away from whatever original sense of style the production was aiming for. Some detail remains when movement is at a minimum, but the rest of this DVD is a non-event.

The 5.1 Dolby Digital sound mix is offered in both English (Dubbed) and Thai. Either track gets to the point of the sound design quickly: the violence. The sonic rainbow of snaps, breaks, and shatters are splendidly amped up, adding a special kick to the action sequences. Music and dialogue are tolerably separated. English (Dubbed) and Thai 2.0 tracks are also available.

"The Making of 'Chocolate'" (8:58) is a featurette created to promote the 2008 Thai release of the film (expired texting contests are included). Covering the discovery of Vismistananda and the film shoot in quick succession, there's little to chew on, though some BTS footage of the fight sequences are interesting to watch. The film's Thai trailer is included here.

"Chocolate" goes for the throat in the final act, assembling a melee of Ladyboy assassins, cruel acts of vengeance, and a city block throwdown that has the cast flopping around the air in spectacular fashion. It's a wild brew of Thai action standards, but "Chocolate" is an enormously charming adventure. Even if it doesn't make much sense, tugs shamelessly at the heartstrings, and features a heavy with Jennifer Aniston hair, the feature sparks in just the right way, making for a fist-clenching, mouth-agape sit.