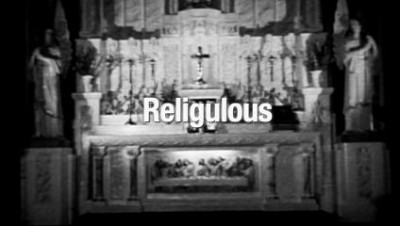 Any time I bring up Bill Maher's Religulous in a conversation, I'm told how he's nothing but an arrogant ass, and he should stop working in the entertainment industry all together. This is just from the mere mention of the film, mind you! It's too bad these people are too closed minded to actually sit down and watch the film, because it's not exactly what everyone probably thought it was; a rant about atheism. That's one thing it's certainly not. If there's a single film on the market right now that absolutely says 'don't judge me until you watch me', this is it.

If you've been living under a rock and somehow missed all the rage Religulous received from religious fanatics, then let's catch you up to speed.

Bill Maher takes off on what you could call a comedic spiritual journey to various religious sites around the world, including the Vatican and Jerusalem. The visual presentation is that of a documentary, as Bill talks to various people around the globe to discuss the absurd intricacies that have been crafted from religious storytellers everywhere.

When Maher was going to various locations to talk to people about the silly ideas that have been 'recorded' in numerous religions over the last few thousand years or so, the name of the film he had to use was A Spiritual Journey. Yes, Bill Maher had to go the Blue Harvest route. Not only that, but nobody was ever even told that it was going to be Bill Maher doing the interviews!

Throughout the film you're going to notice people getting upset once they find Maher is on the scene, and you'll even see him being banned from certain filming locations such as Salt Lake City. 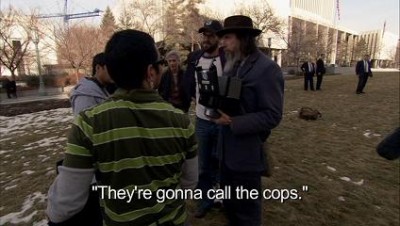 I guess it's a good thing Maher took the sneaky route from day one, because who knows what kind of a product we would have ended up with? Human nature can be so predictable at times, and it's a good thing somebody had the foresight to understand that closed mindedness was bound to get in the way, even with the deceptive ploys.

As I said, Maher is an incredibly blunt man, but he's not setting out to preach atheism to anyone who's willing to listen, or not listen for that matter. In fact, and this is probably a shocker to a lot of people, he acknowledges that there have been times in his life where he's felt the presence of a God himself!

In Religulous, Maher is hardly disrespectful towards religious people. I know that people are going to think I'm crazy for saying so, but as one who loves to debate any and all subjects, his disrespect is more for the ideas behind religion, not the people themselves. There are times where he even wishes people well for having such strong beliefs and faith in their religion! His job here is to merely ask, "Why?"

That's one of the first questions that Bill tackles for the sake of the film. Why is it good to have faith? How can people that are perfectly logical in almost every aspect of their life, believe that there was a talking snake? Maher almost immediately begins to lose his audience at this point. Predictably, people start getting defensive, and others even get up to leave. Respectfully, Maher reiterates that he's only there to ask questions, not to sway anybody over to what's perceived as 'the dark side'. 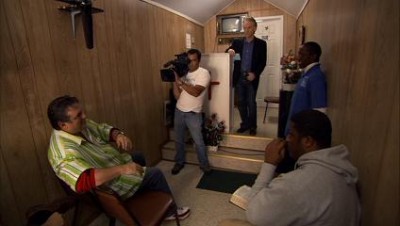 I'm not going to sit here and inform you of all the different questions or issues Maher takes on in Religulous, because what's the point of seeing the film after you read my review then? What I can say, is that Bill comes up with questions that sound like they might be easy to answer, but shows us that in the context of religion, common sense gets skewered like a wild boar. I mean, if you're going to believe in some sort of higher power, why not at least question it along the way as you would with anything else in life? A question doesn't inherently mean you're going to change your mind, a question just begs to be examined is all.

That's the sentiment that Maher ultimately tries to convey in his film. He's not interested in dispelling a higher power, but he has a lot of doubt, and with doubt comes questions. All he wants to do is point out the common perceptions that make no sense to him at all.

I know I'm spending a lot of time trying to inform you of what Maher's intentions are, but it's the point to be made here.

I've heard people say they don't want to check this film out because they believe in God, and don't think they'd find this to be worth their time.

I understand that there are going to be people that would rather be shot in the face with a harpoon than actually take the time to see this, merely because it delves into numerous teachings of religion in a comical way. However, wouldn't anyone that considers themselves to be open minded actually want to see this movie? What kind of a person just turns off 'the noise' just because somebody has a different point of view? That's not how we become smarter, and it's not how lessons are learned.

Everyone should see Religulous at least once, just to hear the arguments that are put forth. If you see the film and you don't take anything away from it, great! If not, then you don't! It's as simple as that. The questions that a lot of people should be asking about the religious teachings they've learned are all right here, and every last one of them deserves to be heard. Don't be afraid you're your religion is going to be singled out either, because Maher hits all the biggies, including Scientology in a satirical way!

Without reservation, I can say that Religulous is hilarious, and almost frightening at the same time. To see what people have to say, or in some cases not say, reveals some truly ignorant perceptions that we know run rampant almost anywhere we're willing to look. There's even a senator that tries to smart talk his way out of the discussion of religion, by saying, "You don't have to take an IQ test to be in the senate!" Queue the awkward silence! 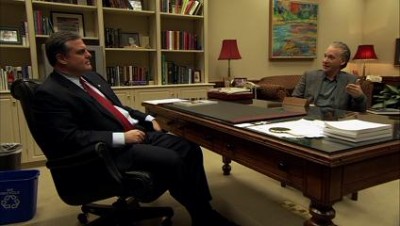 The only people that I believe should truly be offended by Religulous, are those that are one hundred percent insecure about their beliefs. Even if you can't walk away from this film agreeing with any point Maher has to make, including his opinion that the world is ultimately going to violently end because of religion, you should at least be able to find this an amusing look at some of the numerous discussions about religion that will persist in daily life. Agree with the man or not, Religulous is eye opening in one way or another, no matter what your beliefs!

Presented in anamorphic widescreen at an aspect ratio of 1.78:1, Religulous is a very 'faithful' transfer (pardon my pun) of the source material. Filmed in a documentary style, Religulous isn't a film that would probably stand out if it had a high def presentation, but that's just fine, because the DVD does a good enough job to satisfy the videophiles!

The image is sharp, the colors and skin tones are accurately reproduced, and the contrast as well as the black levels, are as good as the source allows them to be.

There's a very, very minimal amount of EE that's normal for even some of the best DVD's, but other than that, there's not much you can nitpick about the transfer.

All in all, this is as good as Religulous can possibly look on DVD, and because of the way this film was shot, I surprisingly don't find myself wishing there was a Blu-ray version available!

The Dolby Digital 5.1 track sounds as good as the tiny, shirt button microphones will allow. The film is 99% dialogue, with some occasional musical clips for effect here and there. The dialogue is clean and free of any distracting clipping. There's nothing really in the way of surround sound, except for the music when it comes on. There's really not much else to say about this, other than it's perfectly adequate for the film.

Also included is a Dolby 2.0 track, and subtitles in English and Spanish. 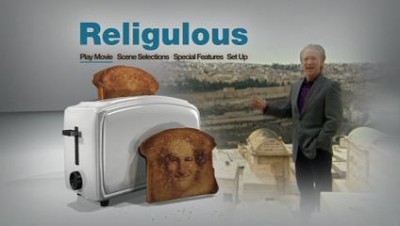 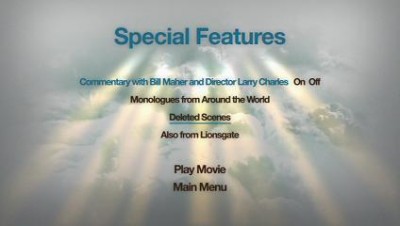 Commentary with Bill Maher and Director Larry Charles - This is a fun commentary that hardly seems to be as long as it is. Even some of the best commentaries can be a bit tiresome when it comes to DVD, but Maher and Charles keep things interesting. They don't hold their noses up in the air to talk about all the production issues that came up from recording on the fly in a serious manner. Instead, we're treated to a track that's informative and entertaining.

Deleted Scenes/Monologues from Around the World - These two separate features focus on material that just didn't make it into the theatrical cut. One can only assume that the reason behind the cuts was for a better flow in the film, or to make room for the best of the best. If you enjoyed the film, you're most likely going to appreciate everything that's available here, as the quality is practically just as good as what made the final cut.

That's all there is for the special features on this DVD. Normally I'd be clamoring for more, but this is merely a documentary. What's not said in the film itself is said in the commentary, and we get a bunch of deleted material besides. I guess we can't really ask for much more than that, can we? 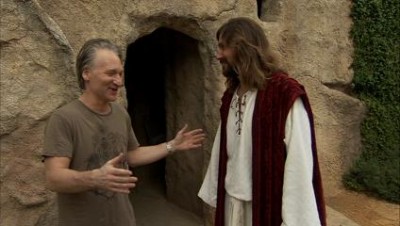 That's the beauty of Religulous! This is a film that can be appreciated from each side of the table, as long as those with religious beliefs are secure enough to watch the film without having a conniption!

It's smart, it's funny, and although there are some cheap shots now and again, Bill gives everyone a fair shot to explain things logically. The reactions that he gets are worth the admission price alone.

The nice transfer on this disc doesn't leave me begging for a Blu-ray release, and the audio is completely serviceable. The extras aren't plenty, but they provide the audience with everything they need at home. Here's something I certainly don't need to debate: I recommend Religulous! The only thing stopping me from giving this film a higher rating, is the fact that once you see it, it doesn't beg to be watched again and again.