Universal // PG-13 // February 10, 2009
List Price: $29.98 [Buy now and save at Amazon]
Review by Stuart Galbraith IV | posted February 13, 2009 | E-mail the Author
A Jean-Claude Van Damme movie based on a popular videogame, Street Fighter (1994) is an awfully easy and tempting target for scorn, the kind of picture film critics love to sink their fangs into. In fact Street Fighter, while not good, isn't quite the disaster many might reasonably have assumed it to be, precisely because it's an action movie adapted from a videogame, made for an undiscriminating audience looking for exactly that sort of escapist entertainment. In that sense it delivers the goods, though it's also ultimately unsatisfying in many respects. It's not in that so-bad-it's-good category, nor is it fascinatingly bad or unwatchably bad. No, Street Fighter has its goods points: some colorful production and costume design and good cinematography (by William A. Fraker), a few characters with potential, and an unexpectedly humorous approach that almost wins the audience over by the end of the film. But the action scenes are bland and ordinary, and the film's many characters have little chance to warm up to those in the audience unfamiliar with the videogame. In the end it's a mediocre if curious film not without interest.

Universal's "Extreme Edition" Blu-ray edition may win it a few new fans and help its miserable reputation somewhat because the picture is bright and colorful and the loud 5.1 DTS-HD Master Audio is the kind of thing that draws in the action crowd. 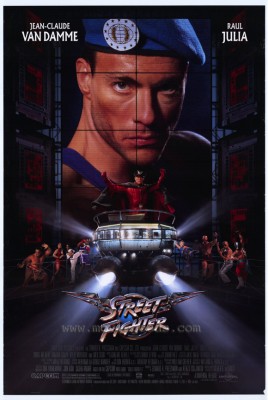 Set in the fictitious Southeast Asian country of Shadaloo, the film centers on efforts to rescue several dozen "Allied Nations" workers kidnapped and held for ransom by warlord General M. Bison (Raúl Juliá, in his last theatrical feature), whose enormous high-tech military fortress/scientific laboratory is hidden under the ruins of an ancient Buddhist temple.

Meanwhile, back in the laboratory, Bison forces Dr. Dhalsim (Roshan Seth, a surprising actor in this sort of thing, one of several in fact) to genetically mutate Guile's best friend, Carlos "Charlie" Blanka (Robert Mammone) into a wild-haired mutant. The final result looks a little like Carrot Top pretending to be the Incredible Hulk. (Late in the film Guile instantly and quite unaccountably recognizes his old friend: "Charlie, it's me!" he says.)

The biggest problem with Street Fighter, a U.S.-Japanese co-production, is that it jumps right into the action without any set-up for those unfamiliar with the videogame. Characters are given the briefest introductions, then have no time to develop into anything more than cardboard. Ken and Ryu, for instance, are virtually interchangeable (except, one supposes, in their fighting styles, the kind of thing that was a Big Deal in the videogame). The one exception, sort of, is Chun-Li, motivated by that old chestnut of avenging the murder of her father at Bison's hands.

Oddly, Jean-Claude Van Damme isn't in the film all that much. You'd assume he'd be front-and-center but mostly is on the sidelines. Street Fighter is really an ensemble cast film with Guile the hero only by default, the character who gets to fight Bison at the climax, but really it's almost a supporting role. Ironically, Raúl Juliá's Bison is onscreen more than anyone else.

Ironic because at the time Juliá was dying of stomach cancer. He shot his scenes, all studio interiors, in Vancouver, and around this time knew he was dying but vehemently denied it, claiming his alarming weight loss was the result of a macrobiotic dieting. Lord knows why he'd want to spend his last days on the set of a dumb action film; perhaps he wanted to leave his family as big an estate as possible. In any case, though his appearance is rather shocking - in the film he looks more like the actor Joe Turkel (The Shining, Blade Runner) than the actor Raúl Juliá - he's physically quite active in the film and seems to be enjoying chewing the scenery. (He's much more enjoyable in this than as the villain in Clint Eastwood's awful The Rookie, in which he affected the worst German accent since the days of Hogan's Heroes.)

The action scenes are disappointing. One problem is that all the martial arts fighting is cut together in the usual Western World fashion that thwarts the artistry of the movements with too-quick cuts (often on the blows) and tight shots that obscure the action - the exact opposite of classic Hong Kong and Japanese martial arts movies (of Bruce Lee, Jackie Chan, Sonny Chiba, etc.) that use longer, wider angle cuts in the manner of a Fred Astaire dance routine.

Another reason the action scenes don't really deliver is that they're all just sort of dropped in together. There's little-to-no build-up to a big set-piece action scene, little discussion of strategy or even the purposes/goals of each fight or battle. It's so muddled that when the hostages are shown again late in the film (in Bison's convenient, easy-access hostage pit) it's like, "Oh yeah - the whole point of this is to rescue these guys!"

Not surprisingly, given the film's origins, director-writer Steven E. de Souza adopts a jokey approach to the material. Initially, this sophomoric attitude only makes the film seem even dumber than it is, but gradually this sort of gives way to what's almost a full-blown but affectionate spoof of comic strip-type adventure stories and characters. (An example: in Bison's private quarters is a painter's easel where Bison has painted a self-portrait - as a circus clown.) By the end of the film it's almost like the similarly spoofy Doc Savage: the Man of Broze (1975) or Flash Gordon (1980) and, like those films, this approach almost works, particularly during the climax, where the various Bad Guys become almost loveable and there's even a clever gag at Van Damme's expense. If there had been more of this up front, and if the film had done a better job of establishing its characters during the first 30 minutes, Street Fighter might be better-remembered than it is.

Filmed in Super 35 for 2.35:1 release, Street Fighter shows its age in terms of its visual style but on Blu-ray is still colorful and Fraker's cinematography makes good use of the film's Thai and Queensland locations (though the Vancouver interiors are lit much like every other '90s action thriller). The film's dated CGI effects don't hold up under the scrutiny of high-definition, and neither do the blocky opening and closing titles, though I'm not sure why in the latter case. The 50GB dual-layered, 1080p Blu-ray disc features Universal's ugly but very easy to maneuver menu screens (a carryover from the HD DVD days) and includes their usual book-marking feature.

Audio is English 5.1 DTS-HD Master Audio, and though like the film a bit dated compared with modern mixes, is pretty impressive. French and Spanish DTS 5.1 tracks are also available, as well as optional subtitles in all three languages.

Except for high-def promos for the Street Fighter IV anime and videogame, all of Street Fighter's supplements date back to the "Collector's Edition" standard-def DVD released w-a-a-a-y back in May 1998, making it one of the earliest DVDs to have such extensive special features. Included from that release are: audio commentary with director Steven de Souza, The Making of 'Street Fighter', Outtakes and Deleted Scenes, Storyboard- and Videogame Sequences, and other Archive material.

This one's for Jean-Claude Van Damme and undiscriminating action film fans, and those who want to see their favorite video game turned into a movie, though I have my doubts anyone anywhere in the world truly longs for such things. Rent It.