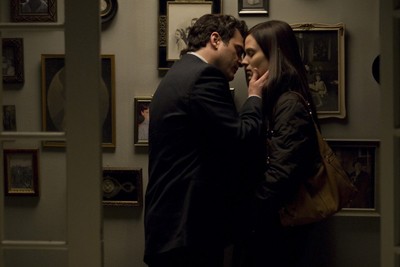 Romance cuts both ways. It can make you the happiest human being on the planet, or make you think about jumping into the ocean and never setting foot on land again. Writer/director James Gray (We Own the Night) tries for both states in Two Lovers, and he achieves the kind of brittle results that he may have intended, I'm just not sure it's the kind of thing everyone wants to see.

Joaquin Phoenix stars as Leonard Kraditor, a troubled young man who has returned to live with his parents after a broken marriage engagement drove him to slash his wrists. He now works for his father delivering clothes for his dry cleaning business, and in his spare time he takes photographs. The pictures are black-and-white snaps of building fronts. When asked why he doesn't take pictures with people in them, he says it's because people get in the way, and he'd rather the person looking at the photo put themselves in the image.

The one asking this question is Sandra (Vinessa Shaw, 3:10 to Yuma), the daughter of another dry cleaner who is considering buying out the Kraditor family store. The arrangement is meant to be a family merger as much as a business deal, as the parents on both sides hope to push Sandra and Leonard together. The youngsters both seem game, too. Sandra is pretty and really sweet, so it makes sense that Leonard would like her. Her attraction to him is a bit baffling at first, he's perpetually nervous and weird, but as things develop, it becomes clear she has a bit of a caretaker complex and hopes to look after him.

Indeed, Leonard needs a lot of looking after. He is supposedly on the mend, but he is actually bipolar and not sticking to his meds. The film begins with another suicide attempt, and his mother (the always resplendent Isabella Rossellini, equally convincing here as a matriarch as she previously has been playing the siren) is trying especially hard to keep an eye on him--and is more empathetic than one might initially think. Her suspicions have merit. If Leonard is not ready to take photographs with people in them, how can he accept people in his real life? As an added wrinkle, just after making his first date plans with Sandra, Leonard meets his new upstairs neighbor, Michelle (Gwyneth Paltrow). The blonde is obviously an emotional basket case, but Leonard immediately rushes to her rescue when a tirade from her father sends her scurrying out of the house. Little does Leonard suspect that the father is actually an older married man (Elias Koteas, Zodiac) and Michelle is an unstable user. She's sexy partially because she's crazy. 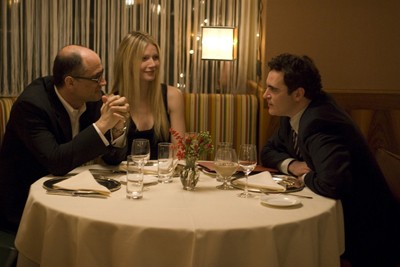 It doesn't take a masters degree in literature to see what James Gray and his co-writer, Ric Menello, are doing here. The two women of Two Lovers are meant to represent the opposing moods of Leonard's bipolar disorder. Sandra is the normal, medicated life that other people want for him, whereas Michelle is the dangerous and unpredictable high of cloud cuckoo land. It's the reverse of the Betty and Veronica archetype: the brunette here being the girl you take home to mom, the blonde the one you have sex with on rooftops and run away with. Neither scenario is terribly romantic. Leonard spends his time with Sandra bobbing and weaving through his own dishonesty, and when he's with Michelle, he's constantly toadying and trying to curry favor. One sees he needs her, the other sees someone she needs. Who will Leonard choose and who will he screw over? And how will he get screwed over in return?

The story of Two Lovers isn't exactly new, but Gray manages to go a long way with the squirm factor of watching Leonard make bad choices. He's a hard guy to feel sorry for, and I have to admit, I spent much of the film rooting against him rather than for him. The folly of Michelle is fairly obvious, and it's actually the main folly of the movie that Gray falls into the same trap as his character. He lets Gwyneth Paltrow seduce his camera way more than he allows Vinessa Shaw to take center frame. It's an imbalance that begins in the script. Though I wouldn't say that the two women are written entirely to be types, they do tend to fall into easy categories, and Gray and Menello don't really give Sandra much to do in order to make the safe selection appear sexy. She's actually kind of boring.

Shot to look grainy and dark, Two Lovers actively avoids the sunshine side of life. Joaquin Phoenix as Leonard is creepy and kind of gross, and as a result, very good. Two Lovers almost seems like his warm-up act for his current red-carpet and talk-show-circuit performance as a man losing his mind; rapstar Joaquin could easily be Leonard after his parents kick him out of the house and his last prescription runs out. It's also nice to see Gwyneth Paltrow taking on a meaty role and solidly underselling it to boot. It would have been easy to go big with the performance and turn Michelle into a more obvious sex kitten/drama queen cliché. Paltrow's more subtle take gives the added twist of making us feel just as sorry for what Michelle is doing to herself as for what she is doing to Leonard.

Really, that's the whole trick of Two Lovers. This movie makes you ache for these people. James Gray has made a thoughtful, quiet, anti-romance movie that is not always easy, is often frustrating, and that is also kind of hard to turn away from or get out of your head. It's not perfect, and it's not necessarily enjoyable, but it doesn't sentimentalize its faults, nor those of the characters, either. The very end smacks a little of the director taking the soft option so as not to leave the audience totally depressed, but then, the look on Leonard's face is not without its ambiguity. Like everything else, it is unsettling for its lack of clear definition. Leonard may have experienced twice as much love, but it also leaves him with twice as much doubt.