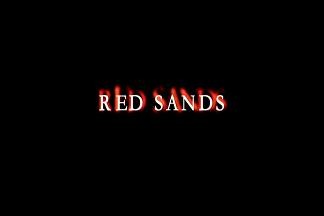 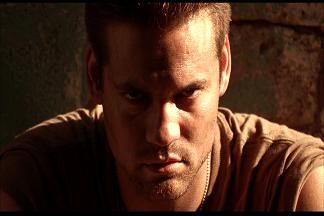 The blurb on the back of the DVD for Red Sands proclaims that the movie comes "from the Director of the cult horror hit, Dead Birds." Alex Turner is indeed the director, and his previous outing Dead Birds was an interesting if inconsistent little horror production set during the Civil War and starring Henry Thomas from E.T.: The Extra-Terrestrial.

Red Sands continues Turner's preoccupation with wartime horror movies and reunites him with Dead Birds screenwriter Simon Barrett. In this go-round, the setting is more contemporary: American soldiers in Afghanistan circa 2002. The results, however, may disappoint the cult fans of Dead Birds.

Red Sands follows a group of American soldiers who have been ordered by their general to watch over a road the Taliban are using from an abandoned home in the middle of the Afghan desert. The story is told in flashback, as the lone surviving soldier of the ordeal, Jeff (Shane West), is being debriefed by the general (J.K. Simmons, whose headlining on the front DVD cover art is borderline lunacy considering he's in the movie for a total of about two minutes) at the start of the film.

It seems the crew Jeff was a part of shot apart an old stone statue of a woman during their mission. Unfortunately for them, the statue contained the spirit of a Djinn (yes, the same menace from the Wishmaster films from a decade ago, although this time the Djinn arrives in a female form courtesy of actress Mercedes Masohn). As Jeff and his compatriots hole up in the abandoned home, the Djinn appears out of a blinding sandstorm. Mistaking her for a lost local, the soldiers allow her refuge - and one by one they succumb to the Djinn's mystical power.

Red Sands was a movie I wanted to like more than I ended up liking. It has a great premise; I appreciate a horror movie that exploits a contemporary event - and a stronger script could have provided some interesting commentary of this long-running war on terror. Mercedes Masohn is both attractive and menacing in her siren role, and her performance is probably the best aspect of the film.

However, the setup would have worked better as a short. The premise just doesn't have enough to sustain an 88 minute movie, and the final hour is a tedious exercise in seeing how Jeff's compatriots meet their end (it was definite mistake to forecast everyone's demise at the start of the movie, as it eliminated much of the potential drama / fear out of the proceedings). The film's "twist" ending can be seen coming a mile away, and some of the CG-terror sequences are comparatively weak in a Sci-Fi Channel kind of way.

Red Sands is worth a rental, if you're curious about it or were a fan of Dead Birds. Just go in with lowered expectations. 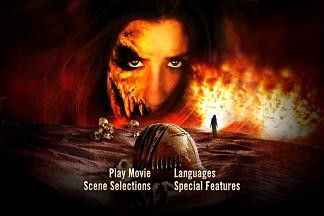 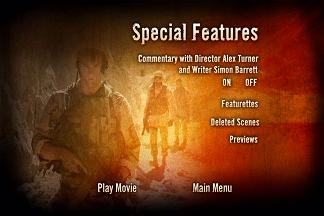 Sony gives Red Sands an anamorphic widescreen presentation in a 1.85:1 aspect ratio. I was unsure what to think of the video quality - the film has a lot of video noise and the occasional speckling (as if the movie were produced 30 years ago). I don't know if this was done deliberately to set the mood or not.

Red Sands is provided with five different language tracks: English, Portuguese, Thai, French, and Spanish. The first three are in Dolby Digital 5.1, while the last two are in Dolby Digital 2.0. The English track is the default and the one I listened to. The score by String Theory dominated a bit too much and dialogue could have been stronger.

An ad for the Blu-ray format as well as trailers for Anaconda: Trail of Blood and Screamers: The Hunting precede the main menu. Sony's penchant for loading up their discs with trailers certainly bears fruit here. A Previews option provides access to the aforementioned ads plus additional trailers for The Grudge 3, Boogeyman 3, The Lodger, Against the Dark, The Devil's Chair, REC, Deep Winter, Librarian 3: The Curse of the Judas Chalice, The Poker Club, Zombie Strippers, The Messengers 2: The Scarecrow, Resident Evil: Degeneration, Quarantine, Buried Alive, Breaking Bad, and an ad for Fearnet.com.

Surprisingly, given the film's direct-to-video status, there's a large amount of Red Sands-specific extras on the DVD as well. For starters, a Deleted Scenes option houses four cut scenes titled Angry Pirates, Magic & World Records, The Goat Herder, More Blumpkin, and Let the Marines Take Care of It. They can played individually or accessed together via a Play All (8:34) option. The scenes are in widescreen but are not anamorphic.

Two featurettes - The Screenwriter Diaries: The Making of Red Sands (20:27) and Red Sands Set Tour with Noel G. (6:45) - provide background information on the making of the movie in an informal manner. Unlike the deleted scenes, these featurettes are in anamorphic widescreen.

Finally, and most significantly, a feature-length commentary track with director Alex Turner and writer Simon Barrett is made available. A random sampling suggests the track is informative and that the pair contribute a lot of insight into the film's production.

Red Sands, the follow-up to Alex Turner and Simon Barrett's cult horror film Dead Birds, is another war-set terror film. Unfortunately, Red Sands would have worked better as a short; the plot, especially with its flashback narrative, just doesn't have enough gas to sustain an 88 minute movie. It's worth a rental for the novelty of seeing a fright flick set in contemporary Afghanistan, but dive into it with low expectations.