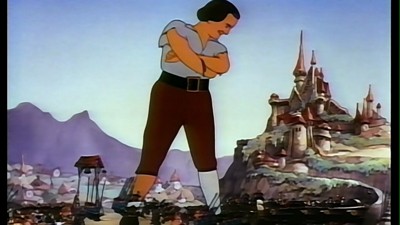 Animation fans will always lament that the Fleischer Studios never got the fair shake they deserved in competing with their rivals at Disney, but DVD is offering a whole new generation a chance to see their classic work as never before. In addition to Warner Bros.' already released Popeye collections and the forthcoming set of their awesome Superman cartoons, Koch has now released a souped-up, restored version of the Fleischers' 1939 full-length adaptation of Jonathan Swift's Gulliver's Travels. Though, before you get too excited, please check the video assessment below, as there are some issues with aspect ratio and overall quality that are a bit perplexing.

Most folks are likely familiar with the Gulliver story, or at least with the piece of it used here. Amongst many other journeys, the seafaring Gulliver visited the island of Lilliput, which true to its name, featured very small people. Or, at least, ones that weren't in the same aspect ratio to our man, who to them is a giant. Gulliver gets involved in a war between Lilliput and a rival kingdom, using his size to teach them all a lesson. In this version, King Little and King Bombo were about to unite by marrying their children, but when a dispute over a song causes the deal to break down, war breaks out instead. At the same time, the loudmouth Gabby, a Fleischer regular, finds Gulliver on the beach. Though ostensibly on the side of Lilliput, Gulliver becomes determined to bring peace mainly to bring the young lovers, Glory and David, back together.

In truth, the script isn't the real selling point for the Dave Fleischer-directed feature. The plot is stretched as thin as it will go, and the slapstick humor and musical sequences work better than the war story. In a lot of ways, it reminds me of a bunch of "Silly Symphonies" strung together, with the best stuff coming out of the visual invention of showing how things are done around Lilliput. As pure narrative, Gulliver's Travels isn't all that riveting, and were it not so wonderfully animated, it would not hold up.

In addition to the size differences between Gulliver and the Lilliputians, the Fleischers have designed them to look different, as well. Gulliver looks like a regular human, and the animation for the character was done with a rotoscoping technique, the artists creating their cells over the top of live action film footage. This looks pretty great, despite some skimping on Gulliver's facial details, and it makes for a fun juxtaposition with the more comedic Lilliputians, who are drawn in a more standard, exaggerated Fleischer style. The backgrounds and use of color are also quite nice, and the fluidity of the animation superb, particularly in the musical numbers, which have fun songs and excellent choreography. Given that only Disney had made a full-length animated movie prior, the accomplishment is all the more impressive.

As first features go, sure, Gulliver's Travels may not be Snow White, but it's a good start for a studio looking to get into the game. The Fleischers had a mountain of potential just waiting to be exploited, but alas, few chances came. They only ever made one other full-length film, Mr. Bug Goes to Town, and their Popeye heyday was also on the decline. Their legacy remains solid, however, and it will be a ha-ha-happy day when their work is finally treated right.

Because that day is not today.... 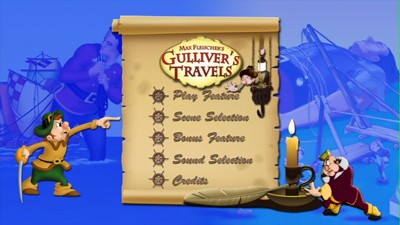 Video:
It's been a long time since I have seen Gulliver's Travels on television or on the public domain VHS I once owned, so all I have is my memory to rely on in terms of the print used on this disc, but from what I can tell the colors haven't been this bright nor the picture so free of dirt and scratches for a while. The widescreen anamorphic transfer was struck from original 35mm elements and cleaned up frame by frame, and the work shows--though I'd still say it's far from a perfect restoration. At times, some of the darker scenes appear splotchy, and interlacing means line quality can look a little soft, particularly in smaller, distant details. The image got jumpy a couple of instances in the final chapter, and there is also a distant quality to a lot of the animation, almost like there is an extra TV screen in front of the one projecting the film.

The original aspect ratio is 1.37:1, but the liner notes allege that this print being wider shows material on the right and left not normally visible. I did some looking around and did find that Cartoon Brew is a bit skeptical of this release, and ToonZone expresses some worries, as well. This leads me to believe that some of what I was seeing on screen--soft lines, a feeling of distance--could be distortion from a stretching of the image. To me, it looks like it might have been pulled out rather than cropped. (Though, again, the liner notes allege neither occurred.)

Sound:
There are three audio options to choose from: a mono mix maintaining the original soundtrack, and both 2.0 and 5.1 soundtracks featuring newly enhanced music and effects. The latter versions have an undeniable power that is immediately evident when you toggle between them and the old mix, but some may object to the loudness. There is definitely a cranked up quality to the sound effects that can be kind of bombastic.

There are no subtitle options.

Extras:
Koch's Gulliver's Travels comes in a clear plastic case with a double-sided cover. Liner notes about the feature and the restoration are printed on the inside. Koch also includes a catalogue for their other DVDs. The packaging and menu design for Gulliver's Travels is rather shoddy. The menu has hardly any functionality, and the cover of the DVD is rather poorly drawn with the design being a shameless lift from the Disney Platinum line of discs. 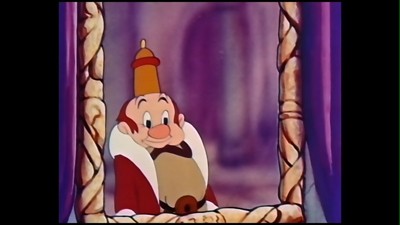 In terms of bonuses, we get two Fleischer cartoons starring Gabby, who is also a character in the main movie. "Swing Cleaning" and "King for a Day" are along the same lines as the main feature, with Gabby (voiced by Pinto Colvig, who was also Goofy) having broad comedic adventures in Lilliput. (The packaging suggests they are outtakes from the main movie, but I wouldn't trust that source.)

"The Making of a Cartoon" is a Paramount short promoting the Fleischer Studios during their making of a Popeye cartoon. This is actually part of the series "Paramount Presents Popular Science" and was already featured on the Warner release Popeye the Sailor: 1938-1940, Vol. 2. In fact, Koch is so keen to cut the Paramount titles off of this, the featurette starts in mid-sentence. The title cards were also cut from the Gabby shorts, and all of them are shown in a full-screen aspect ratio, though non-anamorphic. (See the pic above.)

FINAL THOUGHTS:
Rent It. Though I personally think any animation collection should have this Fleischer touchstone in it, this particular release of Gulliver's Travels is sullied by some dubious transfer choices. The familiar Jonathan Swift story of a shipwrecked man who wakes up on an island where he is a giant is treated to a musical comedy outing by the legendary animation studio, and it's a fun and cool-looking cartoon. This disc is one of the better looking prints I've seen in terms of clarity and color, but the aspect ratio and resolution keep it from being the restoration Fleischer fans have always desired. 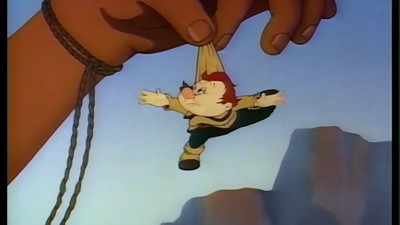