Universal // R // March 10, 2009
List Price: $29.98 [Buy now and save at Amazon]
Review by Tyler Foster | posted March 8, 2009 | E-mail the Author
It's hard to know what to say when reviewing a comedy. Sure, Role Models is funny. It's my favorite pure comedy of the year, and while I've seen it more times than I'd expect anyone to watch it, it still amuses me. Yet humor is subjective, and beyond that it's hard to stretch "it's hilarious!" into several paragraphs. Luckily, as far as I'm concerned, there's something special in this crowd-pleasing, good-natured and above all, profanely goofy comedy that merits a look beyond just how many times I laughed at it. 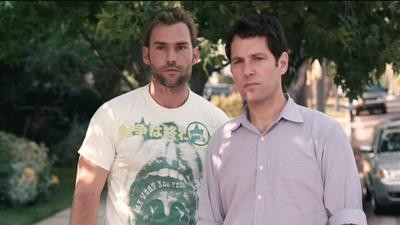 Danny (Paul Rudd) is a brooding, unhappy dick-in-a-rut who constantly worries about his job (hawking the energy drink Minotaur to middle school kids as an alternative to drugs), his association with his party-loving co-worker Wheeler (Seann William Scott), and his straining relationship with his weary lawyer girlfriend Beth (Elizabeth Banks). After having a particularly bad day ending in breakups and arrests, he and Wheeler find themselves as mentors in a Big-Brother-style program logging 150 hours of community service in order to avoid 30 days in jail. Their subjects: Augie Farks (Christopher Mintz-Plasse), a shy, awkward lover of L.A.I.R.E. (Live-Action Interactive Role-Playing Explorers), and Ronnie Shields (Bobb'e J. Thompson), a foul-mouthed wild child.

It's impressive how subtly these kids are fleshed out just through their on-screen parents. Nicole Randall-Johnson only has a couple of brief scenes, but the minute you see her interact with Ronnie, you understand both their relationship and Ronnie's capability to turn off the language and be a good kid. Jim (Ken Marino) and Lynette (Kerri Kenney-Silver), Augie's step-father and mother, respectively, are not as nice. Their attitude towards Augie's nerdy pastime is far from accepting, and yet they still manage to come off underneath as concerned, loving parents and not just heartless villain caricatures who are mean to Augie. All three of them seem like real people in a way that some dramatic actors couldn't pull off in the number of scenes these characters have here, and on top of it they all get at least a couple of chances to be funny.

Not to say that the two young actors can't fill out their own performances, either. It's a challenge to both make Ronnie seem more endearing than infuriating and to look into Augie's love for L.A.I.R.E. without being mocking or condescending, and yet it does both, showing us both Ronnie's good side and the underlying accessibility behind Augie's hobby. While everyone will love Bobb'e J. Thompson's foul-mouthed tirades, Christoper Mintz-Plasse is especially great, giving Augie a bit of tired cynicism that helps define the character beyond a variation of McLovin, and it's easy to root for him as he tries to romance a fellow player named Sarah (Allie Stamler).

Role Models' other secret weapon is the editing. The film runs a sleek 1 hour and 39 minutes (more on the Unrated cut in a bit), and there's not a minute of fat. Judd Apatow's "everything-and-the-kitchen-sink" style of ad-libbing has led to quite a few overstuffed comedies, and I'm happy to say Role Models doesn't just throw everything at the screen and see what sticks; this is sharp stuff. Furthermore, the cutting of the jokes is just another form of timing: linger too long on a reaction shot or cut a delivery a second short and the comedy is defused, but the movie knows its beats. The story's sense of balance between all of the characters' relationships rounds it all out wonderfully: everything is doled out in the right amounts, at the right moment.

As for the comedy itself, there's actually some masterfully subtle humor on tap. While the big jokes involve Thompson's escalating cacophony of profanity and Seann William Scott being naked, what I laugh at most is the quiet absurdity of the lines and the specific delivery of the actors' reactions. Paul Rudd is the master of the double-take, and he gets plenty of work here reacting to Wheeler's terrible philosophies and questionable double-entendres. The surprise star is A.D. Miles as Martin Gary, a comic caricature of an insufferably cheery do-gooder who steals almost every scene he's in by being inescapably out-of-touch with both reality and social skills. Several familiar comedy stars also pop up for very minor cameos (expanded upon in the deleted footage), but Most Wasted goes to Elizabeth Banks. She's as charming as always and her presence is appreciated, but she shamefully doesn't get more than a couple blink-and-you'll-miss-'em jokes. 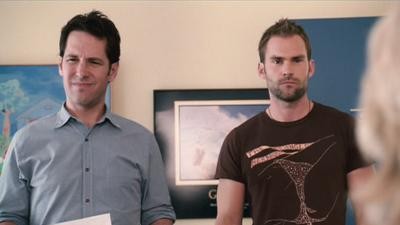 I love Role Models, for a lot of reasons. While director and co-writer David Wain's background in the non-sequitur comedy troupe "Stella" and experience helming the goofy camp-movie parody Wet Hot American Summer might give a different impression of what's in store, this movie has something special in the quiet but genuine way it presents its huge cast of characters. There are KISS gags, references to Ghostbusters, and an undercurrent of understanding about who these people are and why they are that way that elevates this comedy into having a "heart" beyond getting serious at the beginning of the third act. This is a film about real, believable people, and it's hilarious. What more could you ask for?

The Unrated version of Role Models is three minutes longer than the theatrical cut, and its additions are negligible: a couple of scenes about Martin Gary and his romantic interest in Sturdy Wings founder Gayle Sweeny (Jane Lynch), and a gag where Seann William Scott schools Augie on bizarre bird-mating rituals. Since the commentary is on the theatrical cut only (both cuts are included), this smells more like marketing sham than true "extended cut".

The DVD
Role Models comes in an attractive standard-width keep case with the poster artwork on the front and a clean design for the back cover. Distractingly, they've added Augie to the image but not Ronnie -- what gives? The disc is blue, with the shiny disc surface providing the "lines" for the title logo and other symbols, and there wasn't an insert with my copy.

The Video
This 1.85:1 anamorphic widescreen presentation is one of the best standard-def presentations I've seen in awhile. The colors pop off the screen, detail is strong and there are no digital flaws present. I didn't note any difference in quality between the rated and unrated editions of the film.

The Audio
The Dolby Digital 5.1 track is a surprise. The dialogue comes cleanly through the front, but I was impressed by the dynamic sound design of the film, which really fills in the soundscape in houses, offices, woods and streets, but also during the epic L.A.I.R.E. battle sequences (not to mention "Love Gun"). It won't blow your mind, but it's a solid mix for a dialogue-driven comedy. There's also Spanish and French 5.1, as well as subtitle tracks for all three languages.

The Extras
Don't believe everything you read on the internet. Either I'm getting confused with the Blu-Ray's Picture-in-Picture track, or the press release mistakenly identifies Paul Rudd, Seann William Scott, producer Andy Davis and co-writer Ken Marino as being on the audio commentary. In truth, this is a solo track with director David Wain, and it's alright. There is plenty of information about the shoot (and re-shoot) and a couple of entertaining stories, but it's kinda dry; I can't help but admit I was looking forward to hearing from those other non-existent participants.

The deleted/extended scenes (24:20) are a hodgepodge of random edits, including nudity, awesome unused footage of Elizabeth Banks, and director David Wain rapping. Awfully. Several lost plotlines also surface, including one in which Seann William Scott has to get a new job (complete with a surprise Rashida Jones cameo), and a seemingly endless cast of talented comedians with split-second appearances in the movie (pointed out by Wain in his commentary) get a chance to improvise. A blooper reel (3:52) is amusing due to the skillful performers in question (watching Rudd break is especially fun), ending with a great nod to Wet Hot American Summer. 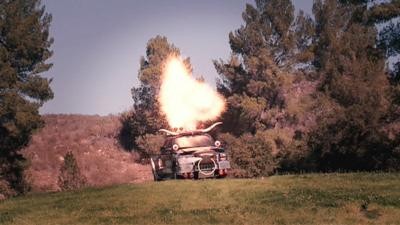 Two featurettes are included. "On the Set of Role Models" (7:41) is pretty good; unlike your average EPK, it's mildly obsessed with foul language and contains some good B-roll footage (perhaps it was put together by Wain and not the marketing department). "Game On: Creating a Role-Playing World" (9:46) obviously focuses on the battle sequences, and it's actually fairly fascinating (and the film's LARP advisor, Adrianne Grady makes for a pleasingly non-nerdy spokeswoman).

It's a nice package, but I've seen a couple other "Sturdy Wings" videos floating around on the internet that aren't present here, and personally I think we've all missed an opportunity for a full-blown faux-Wings music video (yes, all of us. Be ashamed). Most, if not all of the bonus features are subtitled in English, French and Spanish, and no theatrical trailer is included.