Dreamworks // Unrated // March 24, 2009
List Price: $14.98 [Buy now and save at Amazon]
Review by Tyler Foster | posted March 17, 2009 | E-mail the Author
One question probably comes to mind seeing this review, and the answer is yes: DreamWorks has indeed milked the 24-minute Kung Fu Panda side-story Secrets of the Furious Five for all it's worth with an unnecessary stand-alone DVD release. It's not terrible, but it's not essential either, and unless you can find it for about 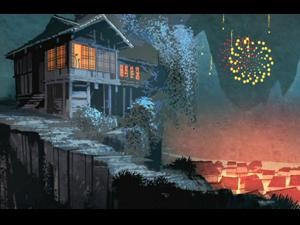 five dollars, it's not worth picking up separately.

Taking place after the events of the feature film, Master Po (Jack Black) is given his newest test by Master Shifu (Dustin Hoffman) -- teaching his kiddie class of rowdy students. They're all interested in learning the fighting moves, but Po tells them the stories of the Furious Five (Tiger, Monkey, Crane, Viper and Mantis), which show that there's more to kung fu than flying kicks.

First things first: Angelina Jolie, Lucy Liu, Seth Rogen and Jackie Chan were apparently too busy to participate in this short, although these are generally intended to be younger versions of the characters, and Chan is at least nice enough to pass the job along to his real-life son Jaycee. Black and Hoffman are the big draws, though, and David Cross and Randall Duk Kim reprise their roles.

The best reason to watch this short is the stunning 2D animation. The backbone of the story is animated just like Kung Fu Panda, but the individual stories of the Furious Five are done like the movie's title sequence. A couple transitions here and there are a little spotty, but the style is awesome, blending in carefully integrated 3D elements with a stylish, layered look. On the other hand, animation fans looking to see more of this gorgeous artwork should probably get Tracey Miller-Zarnecke's book The Art of Kung Fu Panda instead.

The stories are pretty simplistic, but they teach good (albeit simple) lessons about treating other people with respect, fitting in, patience, being nice to one another and self-confidence. The best of them is probably the story about Viper, which additionally provides a solid message to young girls. As with the movie, the comedy is pretty light and broad, and though the movie is rated PG, I'd guess this would easily get by with a G rating. 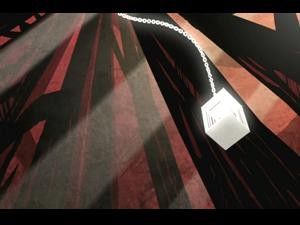 I'm not saying Secrets of the Furious Five isn't fun enough to sustain for just shy of a half-hour, or that it doesn't accomplish its intended goals, but its intended goal was to be a DVD bonus feature, and it still is. The cover hypes it up as "The Next Kung Fu Panda adventure, and in a way it is, but unsuspecting shoppers and dedicated fans who missed this the first time around shouldn't get sucked in by DreamWorks' marketing ploy.

The DVD
The DVD comes in an attractive yellow case that's been altered from the packaging design that it had when it was included in a 2-pack with Kung Fu Panda. It does list the runtime in the tiny grid on the back, but otherwise conveniently avoids mentioning that this is not a feature-length film. The disc has a plain silver finish, there is no insert, and the DVD menu is incredibly straightforward.

The Video and Audio
The 1.78:1 widescreen presentation is colorful and sharp, befitting a recent production. It captures all the fat-moving action and comedy ably, and I have no complaints. The Dolby Digital 5.1 is also impressive, with all sorts of sound effects and action coming through the surrounds. Both of these would fit right in with the feature film. Dolby 2.0 is also included for no real reason, along with English, French and Spanish subtitles.

The Extras
There are two sections here: "Po's Power Play" and "Land of the Panda".

First up in "Po's Power Play" are six really terrible five-minute drawing tutorials on the characters of Kung Fu Panda. I know this is for kids, but it actively teaches them the wrong way to go about drawing something (copying the outward details), and therefore it's only useful for drawing the characters in the position the tutorial chooses. 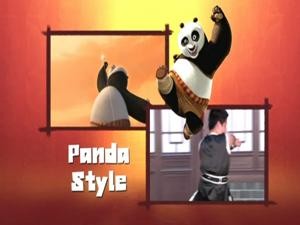 Also, if you have a small screen, the section will be hard to use. There is also an interactive game called "Dumpling Shuffle", a version of the classic ball-under-cup game that's interesting for about ten seconds, and a slew of DVD-ROM features ("Sound Machine", "Printables", and video game demos for Kung Fu Panda and Madagascar; Escape 2 Africa) for those with computer players.

"Land of the Panda" kicks off with a "Learn the Panda Dance" dance tutorial (4:28) with "your girl Hihat", which might be fun for kids, but I wonder why it isn't followed with the music video or something. The next tutorial is hugely questionable: while I'm okay with learning how to draw poorly or dance with Hihat using a DVD, I'm not sure we should be teaching kids kung-fu. Yet this is five little kung fu tutorials for learning the most basic elements of the character's styles. Use with caution, parental supervision, and an awareness of fragile things around you. You can learn about the Chinese Zodiac with an interactive calendar, which spans way back to the 1950's (but obviously just says the same things on every page). "Animals of Kung Fu Panda" (6:15) is at long last a featurette about, yes, the animals in Kung Fu Panda. It's exceptionally basic, and the features conclude with an interactive quiz.

I had been hoping the two sections had actually corresponded to making-of information and kid-friendly material, but hey, I'm really not the DVD's target audience (and who knows how much making-of there is). The features are also subtitled in English, French and Spanish.

Conclusion
It's agreeable, but also a cash-in. Rent it if you must see it, or wait for it to hit the bargain bins.