Fox // Unrated // March 17, 2009
List Price: $34.98 [Buy now and save at Amazon]
Review by Stuart Galbraith IV | posted March 21, 2009 | E-mail the Author
To say that from a technical standpoint The Robe (1953) was the most influential movie since The Jazz Singer revolutionized sound would not be unreasonable. Though This is Cinerama, released 12 months before, actually launched the widescreen revolution of the 1950s, it was the technically watered-down CinemaScope that made widescreen commercially viable. When The Robe opened, Cinerama was still playing its single feature in just four theaters worldwide, while just six months after The Robe's premiere, CinemaScope was in 3,500 theaters (13,500 by 1955) with about four dozen films in release or production from almost every major studio.

By then even movies not shot in CinemaScope were being released in some form of wide screen. Even before The Robe's premiere, hype about the process prompted other studios to start framing their "flat" films for cropped widescreen, i.e., usually for 1.85:1. CinemaScope also introduced many Americans to the concept of stereophonic sound - and its popularity accelerated the development of stereophonic records, which weren't available until 1957. The Robe also accelerated the transition away from black and white to color films, the use of all-star casts, and the growth of the biblical/historical epic.

All this makes it easy to forget that The Robe also happens to be a very good movie. Though in many respects it's practically a remake of Quo Vadis, MGM's big epic from just two years prior, it improves upon that film in most respects, and is a much better movie than its reputation would suggest.

Fox's Blu-ray version is absolutely stunning. Who'd have thought an early CinemaScope movie could ever look this good? It's almost like, well, a modern miracle you see without glasses (note ad below). Restored by the people at Fox and boosted by the Lowry System's digital restoration technology, it exemplifies why people who love movies are so excited about high-definition discs. Although I have a few quibbles about some of the extra features and with a particular aspect of the restoration, it's easily one of the best Blu-ray releases this or any other year. 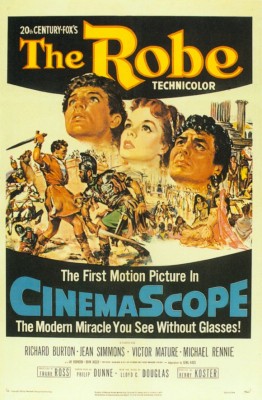 The main difference between Quo Vadis and The Robe is that the Roman patrician in the former is merely pig-headed for most of the story, while The Robe's Marcellus Gallio (Richard Burton) is haunted with guilt after overseeing Christ's crucifixion. Initially he thinks he's cursed by Christ's "bewitched" robe, cared for after the crucifixion by Marcellus's Greek slave, Demetrius (Victor Mature). Through Demetrius, Marcellus is introduced to Christian disciple Justus (Dean Jagger) and, eventually, Peter (Michael Rennie) himself. When Peter explains that he, too has a heavy cross to bear, having denied Him three times, Marcellus realizes Christ has already forgiven the Roman for crucifying Him, and thus is converted.

The integration of famous scenes from Christ's life and crucifixion with Douglas's characters is ingenious. Christ himself is seen only from a distance, or otherwise obscured; a technique later employed in other films, notably Ben-Hur (1959). The visual device of reactions to Christ rather than showing Christ Himself is highly effective. Critics were surprised by just how good Victor Mature is in these scenes; he was not an actor terribly well respected before this. But in The Robe Mature's reactions are viscerally powerful, the best acting in the entire film, really.

By comparison, Richard Burton is good in some scenes but not others. He's fine confronting Caligula (a deliriously over-the-top performance by Jay Robinson) or in his love scenes with the Roman ward Diana (Jean Simmons, in a role clearly laying the groundwork for her part in Spartacus). But Burton tends to look silly when he is in a state of near-madness, nor is the sleight-framed Welshman believable as a rugged Roman soldier.

But the supporting cast is great: Torin Thatcher is unusually subdued, excellent as Marcellus's father. Jeff Morrow is great as a vulgar Roman centurion; why he didn't get more juicy roles like this is a mystery. Thesiger is a delight, though perhaps unrealistically benign, as Emperor Tiberius; and Michael Ansara is riveting in his brief role as Judas. (Future Spinal Tapper Harry Shearer is instantly recognizable as the crippled little boy given the donkey as a present.)

Though apparently shot entirely on the Fox lot and Ranch, the art direction by George W. Davis and Lyle R. Wheeler features many very impressive sets, supplemented with forced perspective designs and backdrops with matted-in additions. Everything looks really great in this transfer. Alfred Newman's score is another standout, a score as awesome as its subject matter.

As mentioned with the staging of the background extras, director Henry Koster and DP Leon Shamroy adapt to the new screen shape like that had been at it for years. Some of their compositions are impressively experimental. I was fascinated with one shot of Dean Jagger and Richard Burton talking in the foreground, strangely out of focus and in the shadows, while behind them extras walk around in focus in broad daylight. It's quite interesting, creating a kind of ersatz 3-D effect.

The Robe's titles are noticeably soft; it's almost like watching the old 16:9 DVD release. Just when you think maybe this isn't going to look so hot after all, the first straight cut of the picture suddenly threatens to pop right off the screen, revealing an incredible level of sharpness and detail that belies the extreme limitations of the first Henri Chrétien CinemaScope lenses. Large crowd scenes, with their unusually well-directed background extras (especially in this 2.55:1 presentation), come off best but also the marble columns, walls and floors of the Roman buildings have a weight and texture never seen in previous home video versions, while the armor worn by the Roman centurions is similarly striking. Several of the matte shots (particularly one of Capri and a later one of Rome) are breathtaking.

This is all the more amazing when one considers that The Robe was a victim of its own great success: the negative was so over-printed that it basically fell apart. What's been used is a composite of dupe negatives of various qualities with scant pieces of the original camera negative. I went to a screening of a 35mm print some years back at the Los Angeles County Museum and what was apologetically screened looked like it was being projected through cheesecloth and almost literally unwatchable. In a few reels of the Blu-ray version, such as an extended scene featuring actor Ernest Thesiger as Emperor Tiberius, the image is less pristine than other parts of the film, but generally the results are incredible. (Now I really, really wish Warner Home Video would go back and apply the Lowry process to Forbidden Planet, also a CinemaScope production.)

The audio is impressive, though I seem to remember the stereo mix on the DVD of The Robe's sequel, Demetrius and the Gladiators (1954), was even better. Here, the original 4.0 track is retained in Dolby Digital format, while the Blu-ray defaults to a new 5.1 DTS-HD Master Audio mix. Portuguese and French mono tracks are also available, along with optional subtitles in Spanish, Portuguese, Thai, Cantonese, Mandarin, and Korean.

One aspect about the restoration that this reviewer is not happy with is the film's revised credits. Blacklisted co-screenwriter Albert Maltz's name has been added and though done with the best of intentions, instead of righting an old wrong it only sweeps a dark chapter of Hollywood history under the rug, the kind of history-altering we used to criticize communist countries for doing with their textbooks. It'd be fine to precede the film with a note about Maltz's contributions but altering credits 50-plus years after the fact is just plain wrong, and an incredibly stupid imposition on the part of the Writers Guild of America.

The 50GB, dual-layered presentation of The Robe comes packed with extras, and except for a pair of standard-def trailers, like the film most of the supplements are in 1080p high-def. When you hit "Play," the disc defaults to an Introduction by Martin Scorsese; he puts everything into perspective, wisely suggesting the viewer imagine that it's 1953 while explaining how most audiences were unprepared for the innovative movie they were about to experience.

The featurettes, produced by Cloverland, are generally excellent. The Making of 'The Robe' (31 minutes) and The CinemaScope Story (18 1/2 minutes) are good primers on their subjects, leaning heavily on film scholars and industry insiders, and the technical aspects of the CinemaScope process is explained well. The only disappointment is the absence of Jean Simmons, though it's great to see actor Jay Robinson in a new interview. One shot supposedly of actor Jeff Morrow is misidentified. Another featurette, From Scripture to Script: The Bible and Hollywood (24 minutes) actually is pretty limited to The Robe and not the religious epic genre generally, but it's still quite interesting. Advertising extras include the usual Fox Movietone News excerpts seen in previous releases, and an interactive pressbook.

The only major disappointment with this release is that it doesn't really include the 1.37:1 standard version of The Robe, shot simultaneously but unseen for many years. (Curiously, on TV they'd always run a panned-and-scanned version of the 'scope version, even though this framed for 1.37:1 exists.) The Blu-ray's back cover promises The Robe Times Two: A Comparison of [the] Widescreen and Standard Versions as a BONUSVIEW picture-in-picture function. Apparently, to access this feature, your player also has to be hooked into the Internet because all this material is available only through BD-LIVE. Mine isn't, and apparently as a result nowhere on the menu screens that loaded into my player is there any mention at all of this extra.

(Update: I was wrong. It wasn't a BD-LIVE extra, but available with the other extra features. At the time I wrote this review, I was using a 1.0 model Blu-ray recorder that, even with firmware updates, couldn't play this supplement. My PlayStation 3, purchased since, plays this feature just fine. Thanks to Mark Vansickle-Hirst for pointing this out.)

Another BONUSVIEW picture-in-picture extra, The Real-Life Search for The Robe is available to view as a Play All, non-PIP option.

I note my confusion about this as someone with a strong interest and background in classical Hollywood cinema, but who's only average (and middle-aged) when it comes to understanding all the ins-and-outs of the latest home video technologies. I wonder how many Blu-ray player owners out there actually have their machines hooked into the Internet, or want to even if they know how to do so. As such, considering that an older generation of Blu-ray consumers will more likely be attracted to older movies - catalog titles - on Blu-ray, as opposed to the computer savvy younger generation desiring all that interactivity, I question whether making us old fogeys work so hard to access special features promised on the box but which require a lot of time and effort is such a good idea. Why not just release the standard release version on the disc itself?

Other than that last disappointment, Fox and Lowry have achieved something really spectacular with this release. It generates the same kind of excitement movie buffs used to feel when Criterion first started releasing special edition laserdiscs, or when region-free DVD players opened up the European and Asian markets for the American consumer (and viceversa). One of the year's best, and a DVD Talk Collector's Series Title.