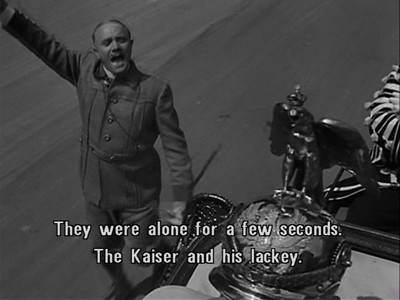 The Kaiser's Lackey (Der Untertan) is the 1951 film of East German filmmaker Wolfgang Staudte (The Muderers are Among Us). It is a broad social satire based on a novel by Heinrich Mann, who also wrote the source material that became The Blue Angel. Given where The Kaiser's Lackey emerged from, the comedy about a nation politically divided and the misguided man who cozies up to nationalism is particularly biting; however, I'm not sure it's all that funny.

Werner Peters plays Diedrich Hessling, a small-town boy who grows up fearing everything, be it the policeman on the corner or the boogey-man stories his mother tells him to make him behave. Once he starts school, however, young Diedrich learns that one need not fear the system, and if he sucks up to the teacher, he will win favor. Thus, we watch as Diedrich grows and enters the adult world, maneuvering between roles as a meek college student, a bullying frat boy, and a flat-footed soldier. He wins and breaks hearts, most notably rejecting a woman whose virtue he has stolen (Sabine Thalbach), and puffs up his own courage in the refuge of the mob. Things change for him when his father dies and leaves him the family textiles factory, and the bully becomes the boss. Taking a stance against the Socialists, he eventually becomes the stooge of the Nationalist party, who support Diedrich's beloved Kaiser. The man's bumbling political career takes him all the way to the feet of his hero, but also all the way to ruin.

Staudte's film is expertly made, full of verve and wit and a visual vigor that is quite impressive. The director and his cinematographer, Robert Baberske, shoot the movie at a near-frantic pace, employing extreme angles and comedic manipulations that wouldn't be out of place in a Coen Bros. movie. They enjoy juxtaposing their characters with telling objects, crafting deep focus compositions where Diedrich appears in frame with, say, a symbol of Teutonic grandeur, the symbol overshadowing the man that is in service to it. Staudte and his co-writer, Fritz Staudte, also employ a mocking narrator who barely keeps his disdain for Diedrich at bay. There is never a question that this is a man we are intended to despise.

And I think therein lies the problem. Diedrich is such a specific and obvious target, the satire is undeniably one-sided. There is very little counterpoint to this groveling idiot, most of the world either already agrees with him or is somehow swayed by a charisma that the character is supposed to possess but yet doesn't really appear on the screen. Werner Peters gives the role as much gusto as it deserves, yet it's really a two-note performance. Diedrich is either nervous and humiliated or full of thuggish bluster. It's a fairly broad portrait of a loser, and it doesn't engender much laughter, be it sympathetic or judgmental.

Perhaps it's just a matter of time and distance, that I am too far away from the culture and the setting. (Though made in 1951, the story actually takes place in the late 1900s.) Sure, Diedrich does represent a certain universal type that should be timeless, but I think sometimes when a movie is born of a particular moment, it risks having a far more limited shelf life. It could just be I am beyond the comedy radius surrounding this one.

Otherwise, I can't put my finger on why I didn't connect with The Kaiser's Lackey more. Like I said, Wolfgang Staudte's direction is impressive in how lively it is. The early scenes of Diedrich's childhood have a balance of menace and whimsy that would make them just as much at home in A Christmas Story as here, and the adult Diedrich's grotesque displays of ego are just as good. I guess it's just that more than half a century later, The Kasier's Lackey lacks the same immediacy it would have had in 1951, and without the emotion or the broader frame of reference required for such things, misses its bid at timelessness. 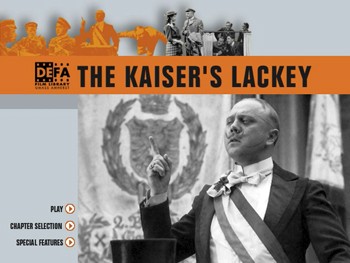 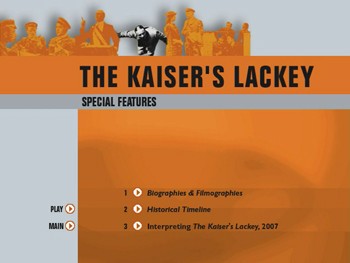 Video:
The black-and-white full frame image of The Kaiser's Lackey is a fairly decent print. It has much dirt and scratches, but is otherwise clear and unobscured. The downside is that the interlaced transfer makes the image rather soft.

Sound:
The German soundtrack is given a basic mix that is largely clear, though not without its glitches. There is occasionally some hiss, as well as some unbalanced tones. Still, like the video transfer, it is a passable job, far from the best I've heard but also far from the worst. The English subtitles are easy to read, moderately paced, and free of grammatical problems; they are, however, burned into the picture rather than optional.

Extras:
The Kaiser's Lackey has several text-based extras, including a Historical Timeline to enhance one's understanding of the movie and biographies of Wolfgang Staudte and Werner Peters. In addition to these two that can be found in the Special Features menu, if you select the DEFA logo from the main menu, it will take you to a screen explaining the purpose and history of the organization, as well as the film archive that has produced this DVD.

The 19-minute 2007 featurette "Interpreting The Kaiser's Lackey" is an amateurish production (the main commentator can be seen taking a deep breath at the start of his talk) that looks like it was made for a classroom setting. Essentially, one man lectures the viewer on the movie's battles with censors on either side of the Berlin Wall and the larger social issues that contributed to the creation of the film, pausing only for clips from the film.

FINAL THOUGHTS:
I hate to give The Kaiser's Lackey only a Rent It, because I really did appreciate the inventiveness of the filmmaking. Unfortunately, a comedy can be made well and still not engender much laughter, which is what I found to be the case with this 1951 East German film. A satire about the political upheavals in the late 19th Century, focusing on the personal upheavals and lack of moral fiber of one particular loser, The Kaiser's Lackey is a product of its time that is maybe too much of its time to have any lasting impact on modern-day viewers. Still, it's visually impressive, and thus does have at least something to recommend it. 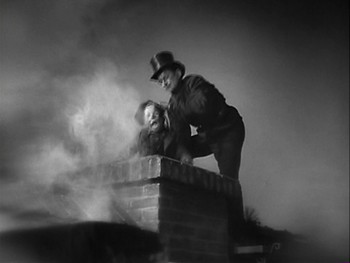 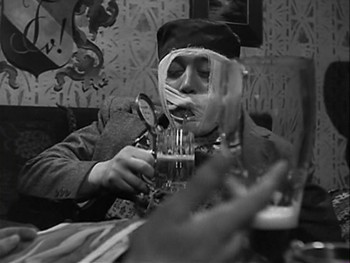