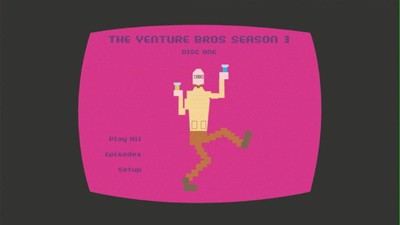 Sad to say, I was late to the Venture Bros. party. Most of Cartoon Network's Adult Swim fare is not to my liking, too reliant on flash animation style and slacker humor, and so this show completely skated under my pop culture radar when it debuted in 2003. I heard enough good things about it, however, that I was finally prompted to take a look at the cartoon last year, and I ended up devouring the first two seasons on DVD in a matter of days. I was hooked.

For those not in the know, The Venture Bros. is a cartoon series created by Jackson Publick and Doc Hammer that parodies 1960s boy adventurer cartoons like Jonny Quest (who appears in a few episodes as a strung-out, manic adult). The brothers of the title, Hank and Dean (voiced by Christopher McCulloch, who also directs the show, and Michael Sinterniklaas), are actually the third generation in a line of Venture adventurers. Their father (James Urbaniak, a recurring face in many Hal Hartley movies) is the second Dr. Venture, with his now-deceased father being the manly prototype. Doc is best-known for his own childhood TV show, and little Rusty Venture still has legions of admirers who haven't realized that their boyhood hero has grown up to be an insecure, pill-popping, amoral failure.

Now Rusty has adventures with his own boys, though often reluctantly. His arch enemy, and part of a convoluted system of criminal activity that keeps a regular dynamic between hero and villain alive, is the Monarch (also McCulloch), a butterfly-themed baddie whose only real goal in life is destroying Dr. Venture. He is aided in this by a flock of butterfly henchman and his gravelly voiced soulmate, the former Dr. Girlfriend, now called Dr. Mrs. The Monarch (voiced by Doc Hammer). On the Venture side is their government-assigned badass bodyguard Brock Samson (Patrick Warburton), a Zeppelin loving he-man who isn't afraid to get bloody. 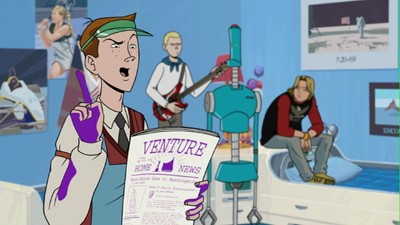 A mere synopsis doesn't do this show justice, however. What Publick and Hammer have created is a hilarious, anarchic, subversive bouillabaisse of pop culture. Going far beyond their Hanna-Barbera roots, in creating The Venture Bros. they pull in references from geeky cult movies, Hunter S. Thompson, superhero comics, G.I. Joe, and most surprisingly, 1980s heavy metal and synthpop. Depeche Mode-related quips sit right next to Styx gags, the music for the show is by J.G. Thirlwell, probably best known for his various recording projects under the Foetus moniker, and the climax of season 2 involved David Bowie, Iggy Pop, and Klaus Nomi. This show is nerdy to the extreme, but nerdy in all the right ways.

Season 3 begins by laying more groundwork for the ongoing mythology of the show, giving us flashbacks to the origins of both Dr. Girlfriend and the Monarch as they are being fully inducted into the Guild of Calamitous Intent. This means a promotion in stature and a home in a town called Malice (a Jam reference? Yes!), but also the loss of arch enemy privileges against Doctor Venture. So, various plots will involve the Monarch trying to surreptitiously menace his old foe, particularly when a hated rival, Sergeant Hatred (McCulloch), takes over as the new arch for the Venture family. Much of this season's shows will involve history coming back to haunt the various characters, be it the origins of Billy Quizboy ("The Invisible Hand of Fate"), a secret organization and its deadly object that the Ventures have unwittingly been protecting all these years ("Orb"), or the various women of Rusty's past, including a childhood sweetheart ("Dr. Quym, Medicine Woman") and his deranged former bodyguard (various flashbacks). There is also the ongoing struggle between Rusty and his recently discovered twin, Jonas, over the family legacy, which culminates in a battle on Jonas' island museum devoted to his father and features the return of the show's Fantastic Four-parody superteam--though, alas, Stephen Colbert doesn't come back to voice Dr. Impossible for a third go-around.

Which isn't to say that in Season 3 The Venture Bros. gets all heavy and forgets to bring the funny--though any attempt to describe why it's funny will invariably suck it right out. Rather, the main fun of a show like this is how each episode on its own has jokes that work as standalones, but the more you get into it, the more the ever growing continuity of the program adds to the hilarity. In that sense, it most reminds me of Arrested Development in that the shows reward repeat viewings. Something obscure in season 1 can have a payoff way later in Season 3 and be all the more funny for the slow burn. 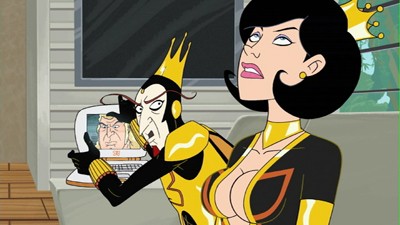 In addition to the adventure-style stories and the reference-laden humor (how many music video characters can you spot in episode 7, "What Goes Down, Must Come Up"?), The Venture Bros. also has a rude edge that should appeal to anyone who likes gross-out humor or off-color jokes. (Google "quim" if you don't know the real meaning behind Dr. Quym's name.) The shows are violent, sexual, and truly politically incorrect--though done smartly, not just for the sake of making us gasp. One feature on The Venture Bros.: Season 3 that is sure to cause some debate is that the episodes are presented here uncensored. The curse words that were bleeped out on television can now be heard, and some nudity that was hidden behind pixels can now fully flower. I am of two minds on this one. In some cases, it's actually funnier with the censoring. To refer to Arrested Development again, I don't think that show would have been as good had the often long strings of beeps that covered up particularly salty dialogue been removed. The beeps are funny in themselves, more subversive, challenging our imagination to fill in the gaps. While the situation is not as extreme here so as to be super noticeable, one's comedy mileage may vary.

The third season goes out with a bang, pulling together a multi-part story over a course of several episodes that sews together various plot threads the show writers began weaving earlier in the season. These involve Brock's rogue mentor, deeper secrets behind the Venture family fortunes, and ultimately a fraternity of assassins that come after Brock in a blood-drenched two-part finale. It's a big payoff for fans of the show and should be highly entertaining to newcomers, as well. 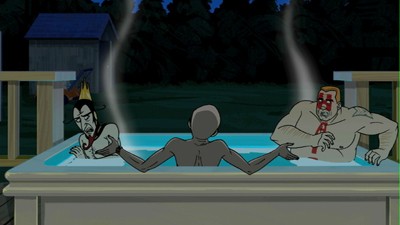 Video:
The Venture Bros.: Season 3 is presented in its original widescreen broadcast format, anamorphic for widescreen televisions. The image is as crisp and as clean as it was intended, with the occasional jagged line being a product of the animation process and not the fault of the DVD authoring. The colors are rich and vibrant, I saw no compression problems or interlacing issues. Top-notch, a strong DVD release.

The Venture Bros.: Season 3 has thirteen episodes spread across two discs. The episodes were broadcast as half-hour shows with commercials. 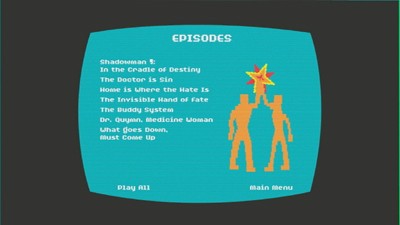 Sound:
The English language soundtrack is given two different mixes, one in 5.1 Dolby and the other in 2.0. The audio tracks are fantastic, with all of the great music and sound effects ringing through loud and clear. There is great interplay between the various speakers, giving the shows a real atmospheric quality.

Extras:
The entire Season 3 DVD package is designed to look like a 1980s video game box, complete with an awesome cover by influential comic book artist Bill Sienkiewicz (artist on Elektra: Assassin and creator of Stray Toasters). This includes funny photos on the inside of the box of people playing the fictional Venture Bros. video game, the graphics for which are also used in the menu design. The box has an outer slipcover and a folding interior "book" with plastic trays for the two discs.

The main extra on the disc is the 13 commentary tracks that Jackson Publick and Doc Hammer have recorded, one for each episode. Whether you choose the play-all function or the episodes one by one, at the start of the particular format, you will see a screen prompting you to choose whether you want the tracks on or off. The commentaries are freewheeling and funny, not limited to the topic at hand, and providing some insight into how the minds behind The Venture Bros. work. 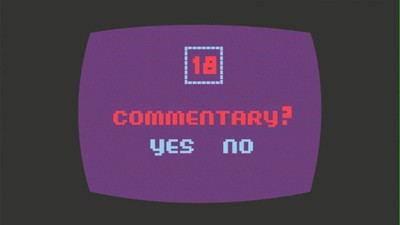 DVD 2 also comes with a selection of deleted scenes. 12 of the 13 episodes had cuts (only episode 8, "Tears of a Sea Cow," isn't represented), and they are shown here as storyboards with the recorded dialogue. As usual with deleted scenes, these vary from extremely inconsequential to mildly amusing, though fans of the behind-the-scenes elements of animation may get an added kick out of seeing the work in its raw form.

An insert in the DVD packaging advertises the release of a soundtrack of the Thirlwell music for The Venture Bros. I believe this soundtrack actually comes as a third disc on the Blu-Ray release.

FINAL THOUGHTS:
The Venture Bros.: Season 3 is another great year for an already great series, maybe its best yet. Full of riotous laughs, gnarly violence, and enough wicked concepts referencing the geekiest pop culture to create a secondary pop culture out of whole cloth, this Cartoon Network program has transcended the notion of mere parody and become its own thing. A multilayered, super-powered comedy, The Venture Bros.: Season 3 is a blast, all the way from episode 1 to episode 13. Fun packaging, amusing extras, and excellent DVD presentation to boot make this one Highly Recommended. 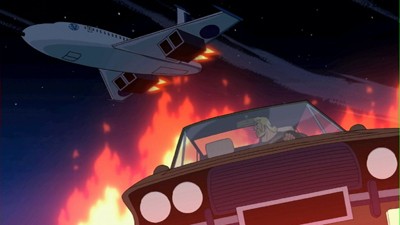