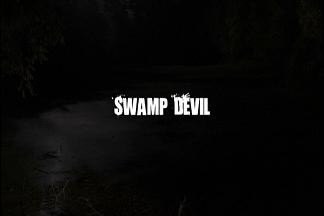 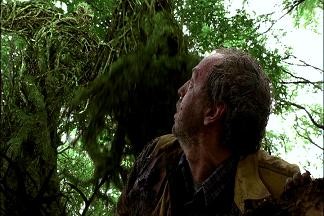 For over a year now, RHI Entertainment and Genius Entertainment have been releasing creature features that aired on the Sci-Fi Channel (usually during their Saturday offerings of cheap science fiction and horror movies) on home video under the banner Maneater Series. The Maneater Series has become rather reliable in offering diverting, if completely forgettable, cheap creature films. There must be some kind of fan base for this series, as the line continues to persist and now even has an official website located here.

In this latest entry of the Maneater Series, we're introduced to Melanie Blaime (Cindy Sampson) who receives a call from Jimmy Fuller (Nicolas Wright), a childhood friend with news that her estranged father is dying. Reluctantly returning to her hometown after a couple decades, she meets up with Jimmy and discovers that he's brought her back to their small town under false pretences: her father Howard (Bruce Dern) is wanted for murder. She meets some overly-aggressive cops, one of whom is a fan of classical music, and the titular swamp devil - more on this laughingstock menace in a second. Not everything is as it first appears, though the audience figures out who the swamp devil is and what's going on long before Melanie does.

And there you have it: another Sci-Fi Channel Saturday movie offering that's now on home video. And yes, it offers just about everything that scores of other recent similar creature features have to offer. . .

Oh yes. Here, it's a cartoonish rehash of DC Comics' Swamp Thing and Marvel Comics' Man-Thing; the Swamp Devil is a walking Bigfoot-style menace composed of green sticks, leaves, etc. It looks pretty silly and has the ability to regenerate and stretch. Inexplicably, it also seems to have power over quick-movin' vines and rapid-strikin' sharp pointed sticks so that nondescript characters can be yanked around and impaled to death.

A cast headlined by an actor whose star has fallen?

Affirmative. Tara Reid, Daryl Hannah, James Van Der Beek, Gary Busey, and F. Murray Abraham must have all been busy this time around, but have no fear, a grizzled Bruce Dern is up for some quick cash.

Check. The old Arnold Schwarzenegger line "You're one ugly m-----f-----" from Predator is warmed up to serve again here.

I could go on, but you get the picture. The first third of Swamp Devil is rather anemic. A lot of talk and little action is all that greets the viewer. The last hour or so, however, is much more fun as the swamp devil starts to terrorize characters on screen in the woods. It's all fairly routine, but if you're into this cheap monster genre, then you should be reasonably diverted by this low budget runaround. It's a rental at best, though. 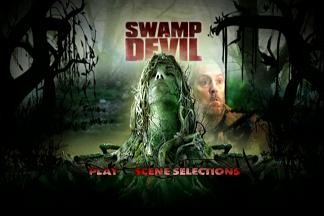 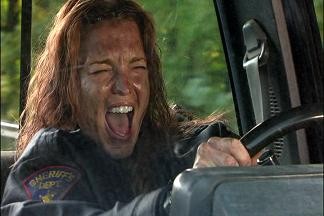 RHI Entertainment advertises Swamp Devil as being in a "widescreen version presented to preserve the aspect ratio of its original exhibition [and] enhanced for widescreen TVs" on the DVD's back cover art. That's basically what's here. The image is anamorphic. It looks fairly strong, with only some minor video noise present.

The sound quality is pretty dismal on the disc I was sent to review, with a lot of warbled distortion that obscured dialogue and strained the score. This only lasted for the first 20 minutes of the movie, but it was very irritating. A hasty search for other reviews of Swamp Devil came up empty in terms of writers noting this problem. I can only assume that this problem isn't widespread. The lone audio track is an English language Dolby Digital 2.0 that seemed good during the last hour, though not exactly dynamic. I've decided not to grade the audio track for this review, however.

No subtitle options are made available.

Trailers precede the main menu for Mask of the Ninja, Street Warrior, the Dragon Dynasty series, and the Dimension Extreme series.

And that's it for extras. The main menu only has two options: Play and Scene Selections.

Swamp Devil offers the typical low budget CG-menace goofiness common in the Maneater Series line of home video products. If you like your horror cheap and dumb - and don't have access to the Sci-Fi Channel - then this is worth a rental.