Warner Bros. // Unrated // March 31, 2009
List Price: $28.99 [Buy now and save at Amazon]
Review by Stuart Galbraith IV | posted April 14, 2009 | E-mail the Author
When a dying Metro-Goldwyn-Mayer released That's Entertainment! (1974), a compilation film celebrating the studio's best musicals, Gigi (1958) was touted as something like the company's crowning glory; it wasn't just a last hurrah, but the artistic culmination of the Golden Era. For those familiar with the genre, this assertion came as something of a surprise. Though the company was dominated by great dancers - Gene Kelly and Fred Astaire among them - Gigi is a musical with virtually no dancing at all. Except for the long-passé Maurice Chevalier, it also had a cast of non-singers, including star Leslie Caron, whose singing voice was dubbed. And though it won nine Academy Awards, including Best Picture, Best Director (Vincente Minnelli), and a tenth, honorary award for Chevalier, it's not really the kind of musical people like to watch over-and-over again, a contrast to more durably popular titles like The Wizard of Oz, Singin' in the Rain, and The Band Wagon.

Clearly, Gigi reflected the aspirations of producer Arthur Freed, Gene Kelly, and others at MGM to make a more adult kind of movie musical, one more cinematic yet at the same time one that reflected the growing sophistication of Broadway shows.

For this reviewer, Gigi always came across as well-intentioned but self-consciously arty and middle-brow. It tries hard to be worldly and tasteful with a European sensibility but instead ultimately embraces its outrageously romanticized Gallic fantasy, one as phony as the Hollywood fantasy presented in the not-too-dissimilar Pretty Woman - the plucky prostitute rescued Cinderella-like by the handsome prince/millionaire/John who turns out to love her after all.

Warner Home Video's Blu-ray, with its excellent high-definition image and audio, plus some informative supplements, go a long way to make the case for Gigi as a great musical. Earlier home video versions just weren't up to the task. Filmed in CinemaScope, Gigi looked awful on VHS and not that much better on laserdisc. Even standard-def DVD couldn't really capture Gigi's subtle attributes, but on Blu-ray the lavish period costumes, (limited) Paris locations, and exquisite art direction really shine for the first time (outside of pristine 35mm engagements), and on big, widescreen TVs the subtleties of the performances are easier to appreciate. It's still a flawed, curious film but the Blu-ray brings out its charms. 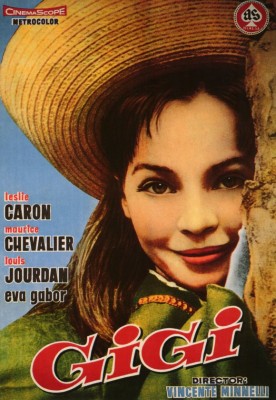 Adapted from Colette's 1944 novella, and as it turns out, remarkably faithful to a 1949 film also called Gigi (more about this later), the film is set in Paris in 1900, where vivacious, carefree Gigi (Leslie Caron) is being groomed by her grandmother, Madame Alvarez (Hermione Gingold), also known as "Mamita," to become a courtesan, the mistress of some Parisian millionaire, of which there are many. Like most teenagers, Gigi is awkward and disinterested in the etiquette lessons her dour great-aunt Alicia (Isabel Jeans) provides; she'd rather have fun with old family friend Gaston (Louis Jordan), a rich but bored playboy who prefers playing cards and drinking Champagne with Gigi and her grandmother to the company of Liane d'Exelmans (Eva Gabor), his current, two-timing mistress.

But Gigi is coming of age, approaching that critical time when she is to be - How to put it? - made available for deflowering. Gaston wants to take Gigi on the town but Mamita forbids it; Gaston's notorious reputation as a womanizer would only hurt Gigi's chances with someone else. At this, Gaston gradually realizes that he's attracted to this child who has suddenly blossomed into womanhood.

Gigi was first adapted as a non-musical French film directed by Jacqueline Audry and starring Danièle Delorme in 1949, and as a 1951 Broadway play starring Audrey Hepburn in her first leading role. A few years later, producer Freed engaged Alan Jay Lerner (and later Frederick Lowe) to adapt Colette's story as a musical. They were in the midst of their greatest success, the Broadway version of My Fair Lady, which opened in March 1956. The musical Gigi is remarkably similar to the non-musical, 1949 Gigi, which MGM presumably acquired for legal reasons from U.S. distributor Spalter International Pictures; it's included as an extra feature here.

But Gigi is also very, very much like My Fair Lady. In fact it's pretty much the same movie (making the connections and coincidences to Audrey Hepburn, the star of the 1964 movie of My Fair Lady, all the more bizarre). Both are Pygmalion stories about the transformation of a gangly, untutored young woman into the epitome of sophisticated glamour. In both stories a member of society's elite, an incorrigible bachelor, selfishly wants to use her for his own ends, but in the end is surprised to find himself deeply in love with her.

It's a lavish production, produced at a cost of $3 million according to Wikipedia, and $3.3 per the IMDb but those figures seem low relative to MGM's musicals from earlier in the decade. This was filmed on location in Paris, but much less so than audiences assume; many of the exteriors were shot on MGM's backlot. Minnelli and his cinematographer show a lot of imagination filming on location, however. They're not hesitant to use shallow focus when they want to zero-in on specific characters, even at the expense of the pretty scenery, and cleverly resort to low angles to emphasize 19th century buildings while hiding modern-day Paris from view, a technique similarly employed by director Don Sharp on several Fu Manchu films a few years later. (Film buffs can also spot the Paris-shot scenes because the French bit players have all been dubbed by the same recognizable voice actor, Paul Frees.)

Though it's interesting to speculate what Audrey Hepburn might have done in the role - Lerner lobbied Freed to cast her - Caron is luminous and very believable as both the carefree teenager and the growingly sophisticated Gigi. Louis Jordan, with that perpetual look of the cat that has just swallowed the canary, is appropriately aloof and bored, and the somewhat underappreciated Gingold and Jeans are delightful - really the backbones of the entire picture.

The film helped - but not single-handedly, as the accompanying documentary suggests - revitalize Maurice Chevalier's career in the U.S., one that had been severely damaged by seemingly contradictory controversies: his collaboration with Nazi Germany/Vichy France insofar as his willingness to perform there during the war, and his subsequent support for European communist and anti-nuclear proliferation causes. Billy Wilder's Love in the Afternoon (with - who else? - Audrey Hepburn) helped reestablish Chevalier, but Gigi welcomed him back to Hollywood with open arms. In Gigi, Chevalier's Honoré Lachaille, Gaston's skirt-chasing but wistful uncle, endeared him to audiences, and his duet with Gingold, "I Remember It Well" (filmed against an amber, setting set) is a highlight.

Gigi was filmed in CinemaScope with original prints by Metrocolor, which were also in Perspecta Stereophonic Sound. The soft and subtle pallet, especially the deep and subtle variations of red - notably Mamita's sitting room, where much of the film takes place - never fared well until now. Even this Blu-ray edition struggles to squeeze out every richly saturated hue, but the beauty of Joseph Ruttenberg's cinematography (his name is inexplicably buried in the credits), the art direction, and Cecil Beaton's costumes (all Oscar-winners) for really the first time on home video, shine through.

(The Blu-ray also reveals a few mistakes. At 59:19 an airplane can be seen flying in the distance, and during Jordan's "Gigi" a big bug can be seen climbing about his shoulder.)

The original Perspecta audio has been remixed - very well - to full-bodied and occasionally directional Dolby TrueHD and Dolby Digital 5.1 mixes. (However, like many WHV titles, the audio volume is, unaccountably, incredibly low; I really had to turn the volume way, way up on the feature but not any of the supplements. Why?) Mono tracks (1.0) in French, Castilian and Latin Spanish, German, and Italian are included, as well as optional subtitles in English, French, Spanish, Dutch, Finnish, German, Italian, Norwegian, Portuguese, and Swedish.

This is the very same disc released in Japan late last year. Though it doesn't list Japanese subtitles on the packaging, my Japanese Blu-ray recorder defaulted to an unlisted Japanese main menu and to Japanese subtitles. Incidentally, I was surprised to discover a heretofore unknown feature, though I'm not sure if it's the disc or the player: I watched the first-half of the 1949 Gigi, then slipped in another Blu-ray disc, watched it, then reinserted the Gigi disc. To my surprise it automatically bookmarked where I had left off on the 1949 film. Imagine that! 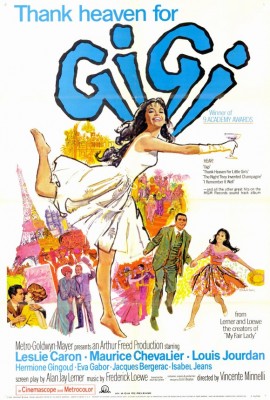 Supplements include two interesting shorts, regrettably both in standard-definition: The Million Dollar Nickel (1952) is a trite propaganda piece with Soviet and Eastern Europeans emigrants writing letter back home about what a swell country the U.S.A. is after all, a place "where you can't tell a shop-girl from a millionaire!" It's included because at the very end Leslie Caron, along with Pier Angeli (at the height of her beauty), Ricardo Montalban, and Zsa Zsa Gabor in turn address the audience in their native languages. The Vanishing Duck (1958) is a pretty good Tom & Jerry cartoon, in CinemaScope and Perspecta (but not in stereo from the sound of it) featuring Little Quacker (voiced by Red Coffee).

More significant is the inclusion of the entire 1949 Gigi, albeit in its cut American release version. An apologetic insert claims this was "taken from the only known surviving print" which may be true insofar as the American release is concerned, but I'm skeptical that a longer, French version does not survive. In any case the film is quite delightful on its own terms, though viewers will have to contend with the original white, crudely-added subtitles that tend to vanish against white backgrounds. We've come a long way, baby.

In high-definition, Thank Heaven! The Making of 'Gigi' is at 35 minutes just the right length and covers all the salient points quite well with one exception: all the main and supporting actors are discussed - except Hermione Gingold, surely an oversight. Leslie Caron, now 77, is featured in this way above-average featurette. Caron and historian Jeanine Basinger talk about the film some more in their audio commentary track.

Though somewhat overrated through the years, Gigi's delicate appeal at long last crystallizes in high-definition, on Blu-ray, in a fine presentation supported by illustrative supplements that help put the film into perspective. It's not really MGM's crowning achievement, but it is a major achievement of sorts, and the Blu-ray disc puts this important, historically significant work in the best possible light.