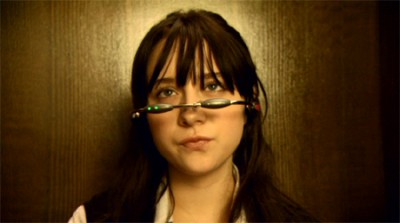 Battlestar Galactica took the sci-fi world by storm when it premiered in 2003. The show's gritty nature and apocalyptic tone made it stand apart from just about every other science fiction show out there, including the original. Through four seasons fans flocked to see how it all ended and what kind of resolution was brought about, but what about how it all began? Sure, if you watched the show you know all about the colonies and how man created Cylons only to have them rebel and cripple humanity. Apparently that explanation wasn't quite enough so Ron Moore, David Eick and company decided to put together a prequel show, the aptly named Caprica

If you're coming to Caprica from Battlestar Galactica (which I'm sure you most likely are) there are some things you should know right off the bat. While this new effort does contain depictions of Toasters in their early stages and an abundance of technology such as paper computers and holographic headbands, references to other colonies, a young Billy Adama, and familiar language such as the word frak, it is absolutely nothing like BSG. Caprica is a family drama that takes place in the BSG universe and you're not going to see raiders, vipers, gunfights with Cylons, or any of the visceral energy that made BSG so damn good. Caprica is merely a precursor that sets everything up and at least in this pilot episode there's absolutely no action. It's intended to be like that and there're still plenty of things for fans to latch on to, but it's important to know going in what your expectations should be.

As you may, or may not be aware Caprica takes place 58 years before the Cylons returned from their hiatus with skin-jobs and nuked the Twelve Colonies. Things were much peaceful then on Caprica, but it's a very different time. The Colonies haven't been united under a President and since they each govern under their own rule, they are naturally quite different from a cultural standpoint. In this pilot we learn most about the Taurons, who are considered to be knuckle-dragging Mafioso types, and Capricans, who are cold, calculative, and at the forefront of technology and science. From these two very different worlds come the Graystone and Adama families. 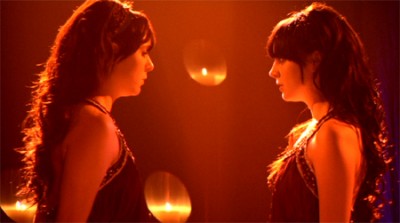 Daniel Graystone (Eric Stoltz) is a brilliant, successful robotics developer and someone who has pushed technology to the next level on many occasions. On the opposite side of the coin is Joseph Adama (Esai Morales) who is an immigrant from Tauron, making a living as a lawyer. When a terrorist attack hits Caprica City Daniel loses his only child and Joseph loses his wife and daughter. These two men are brought together under these dark circumstances and their fates are about to be intertwined by a series of threads revolving around Graystone's daughter, Zoe (Alessandra Toressani).

Before the terrorist attack we are introduced to Zoe Graystone and her friends. In fact Caprica starts out in the middle of a virtual reality rave party where Zoe is conducting some sort of experiment. It would seem that she is a chip off the old block and just like her father she's into creating and pushing technology forward. She has built a digital recreation of herself complete with emotions, self awareness, and her personal memories. When Daniel discovers this after her death, it naturally sets his scientific brain firing off with ideas. For all intents and purposes this digital avatar IS his daughter and she's just missing a physical body. Lucky for Zoe 2.0, Daniel also happens to be working on a special project for the Caprican government, a little something he calls the Cylon. All Daniel needs to get his daughter's avatar in her new body is an artificial brain developed by a scientist on Tauron, which is where Joseph comes in. 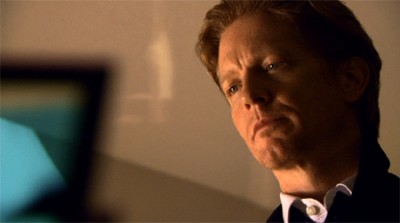 Though they met under random circumstances and formed a bond through their grief, Daniel soon discovers who Joseph is and what his connections are. He uses Joseph to obtain the artificial brain he needs and lures him in with the promise that his daughter can be resurrected as well. There is much more to the plot here and this bit really only scratches the surface of what Caprica has to offer. Like BSG, Caprica is the kind of show that should be watched instead of dictated to. Things just make more sense if you view them for yourself and it's that similarity to its predecessor that has me excited about the series.

As it stands this pilot episode is a great way to get Caprica started, and if the rest of the series follows suit we're in for one heck of a ride. However, there's a long way to go between now and then, and this is only one episode. Fans of Battlestar Galactica can consider this pilot an easy recommendation, but considering the series doesn't actually get underway until 2010 that's quite a long wait. I'm sure Sci-fi will air this at some point (heavily edited no doubt, there's quite a bit of nudity here), and undoubtedly it will be a part of some future boxed set of the show. Whether or not you want to deal with a future double-dip is entirely up to you. Caprica's pilot is thought-provoking, well constructed, and makes you want more. As far as pilot's go that makes it a success in my opinion. 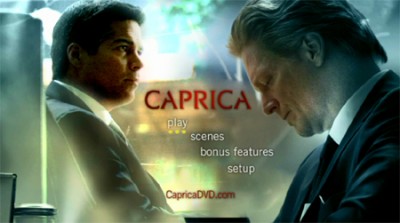 Caprica is presented on DVD with a 1.78:1 aspect ratio and has been enhanced for anamorphic playback. Like Battlestar Galactica different filters were used to differentiate the separates worlds on Caprica. Graystone's world is slightly colder with a blue-ish tint, while Adama's is warmer with an orange on. The result is a starkly different, and artistic take on the world similar to how the production crew approached things with BSG. On a somewhat alternative angle, the grain and grit that appeared in BSG is nowhere here. Caprica is polished all around with some sharp resolution and no film grain at any point. This all comes together to offer a distinct looking show with solid presentation values all around. A Blu-ray release with 1080p resolution would have sealed the deal, but as it stands this Standard Definition DVD is about as good as it gets.

Caprica's audio presentation is somewhat more subdued than I was expecting. After experience BSG's powerful presence on the soundstage, Caprica's dialogue heavy 5.1 offering is much more subtle. The rear channels pick up some light noise from the hustle and bustle of the city during bits of conversation, but otherwise there's no action to be immersed with. Such is the nature of the beast I suppose. Since this is a show that offers no action and very little with regards to effects, most everything remains on the front channel. It's a solid presentation for what it is, but those looking for something akin to BSG are going to be left wanting.

A nice selection of bonus features makes their way onto the pilot episode disc of Caprica. First up is a series of Deleted Scenes which clock in at just over seven minutes. There's nothing really groundbreaking here, though the scenes with Joseph talking to his brother Sam (Sasha Roiz) about the terrorist attack and the one with Sister Clarice (Polly Walker) appearing in the V Club are interesting for what they are.

Keeping up with Battlestar Galactica's tradition is a series of video blogs. There are four all together here and they cover a range of topics. "What the Frak is Caprica?", "The Director's Process", "The V Club", and "The Birth of a Cylon" all clock in at just over thirteen minutes. They offer some nice behind the scene glimpses with the cast and crew, as well as quite a bit of the filming and production process. They aren't as extensive as a behind the scenes featurette, but there's some interesting material here just the same.

The final inclusion on this release is an audio commentary with Director Jeffrey Reiner, Executive Producer/Writer Ronald D. Moore, and Executive Producer David Eick. This commentary track is very insightful regarding the premise of the show, how it all came together, and bits of production they felt workd and didn't. It's a very worthwhile commentary track and there's a ton of information offered that gives you a glimpse into what the future of the show may hold. Once you watch the episode by itself, check this one out for sure. It's really not worth mentioning, but there's a throwaway feature on this disc which is an episode from Ghost Hunters. Why a preview or production video for the upcoming "The Plan" wasn't included is beyond me, but it seems like this would have been the perfect opportunity for it. 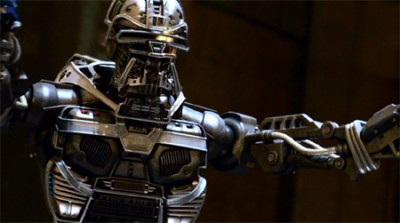 Caprica is a thought-provoking science fiction drama that serves as a worth prequel to Battlestar Galactica. From this pilot episode you can already see where some things are headed, and how the path was laid out for the destruction of the Twelve Colonies. The story jumps around a bit and there are many plots that are introduced, but the main tale about the Graystone and Adama families is quite compelling. Hopefully the series maintains this level of quality, but we won't find out until it starts airing in 2010. For now it's worth noting that this pilot episode is a solid production and it's something Battlestar Galactica fans absolutely must see. I'm going to strongly recommend this pilot episode.