Paramount // Unrated // May 12, 2009
List Price: $89.99 [Buy now and save at Amazon]
Review by Stuart Galbraith IV | posted May 4, 2009 | E-mail the Author
CBS/Paramount has a pretty incredible Blu-ray set in The First Season - CSI: Crime Scene Investigation, a compact five-disc set with all 23 shows from the 2000-01 season, plus lots of good extra features. The series looks and sounds absolutely astounding, a huge step up from its original 4:3 standard-def network airings. The menu screens are unusually well-designed and easy to navigate, and the entire package comes in a standard-size Blu-ray case, so it doesn't take up a lot of room. It's one of the best TV releases this year.

The show itself is incredibly slick, with the look and attitude of a high-concept movie - not surprising as its executive producer is Jerry Bruckheimer (Armageddon, Pirates of the Caribbean). Its fairly rigid format, at least in its first year, limits the depth of the characterizations, both ongoing and self-contained ones, and the scripts aren't quite as good as the production. The show has been criticized for its gruesome and graphic crime scenes, autopsies and the like, and for the many dramatic licenses it takes in depicting homicide investigations.

Not that any of that matters. CSI: Crime Scene Investigation is a great popcorn show; it's entertaining without ever resorting to idiot-plotting; it's high-concept television in the - very rare - good sense of the word. Unquestionably, CSI raised the bar in terms of making series television look more like big-budget movies: Quincy M.E. this ain't. And there's no denying the show's humungous influence; it's been the top-rated television drama for years with two popular spin-offs, CSI: Miami (2002-present) and CSI: NY (2004-present).* Reportedly these shows have a combined viewing audience of about two billion people, meaning a little under one-third of the planet watches at least one incarnation of CSI.

Note: This reviewer did encounter a technical glitch playing some of the episodes on Disc One. It's not clear at this point what the problem is, whether it's a flaw with the disc, a firmware or player issue. For now the problem is described below; when a more definitive answer is determined, I'll update this review.

Set in Las Vegas, CSI's first season has a fairly fixed format. Most episodes cut between three separate criminal investigations, allotting a brisk 15 minutes each for what was then a 45:00-45:30 show. Episodes frequently open with CSI investigators arriving at one of the crime scenes during the teaser then, after the credits, night shift supervisor Dr. Gil Grissom (star William Petersen), a forensic entomologist, assigns it and two other cases to members of his team. They include middle-aged single mom Catherine Willows (Marg Helgenberger), a former exotic dancer, whose humanity contrasts Grissom's Holmesian, slightly geeky analytical mind; Nick Stokes (George Eads), the intellectual, sensitive jock; Warrick Brown (Gary Dourdan), an audio-video analyst with a gambling addiction and an occasionally dangerous independent streak; and Sara Sidle (Jorja Fox), a Harvard-educated, former San Francisco's Coroner's Office investigator, and one tough cookie. In the second episode Capt. Jim Brass (Paul Guilfoyle) relinquishes control over the CSI unit to Grissom and returns to the LVPD's homicide division; he provides a lot of the inter-departmental conflict on the series, and is the "You've got just 24 hours to come up with something!" guy.

David Fincher's vastly overrated Seven (1995) appears to have been a major influence; both share a kind of voyeuristic glee - the more gruesome and bizarre the crime the better - as well as a similar cinematographic style. As William Petersen acknowledges in one of the disc's featurettes, it's a show where homicide detectives never turn on the lights - it's as if they prefer dark rooms and flashlights to a well-lit crime scene. But, as Petersen also points out, such methods may have no resemblance to reality, but it sure looks cool. That, in a nutshell, is the appeal of CSI.

The CBS/Paramount Blu-ray greatly accentuates this appeal, too. The bright color and glamour of Vegas really pops off the screen in high-definition, as does the stylized, postmodern noir look of the show. The pilot episode especially bombards the viewer with stylized images - the filmmakers are very much aware this is a more visual show than, say, the aforementioned Quincy. It's more like Quincy meets The X-Files, the latter seemingly another influence - particularly in Petersen's eccentric scientist-hero; where nerdy-but-appealing Fox Mulder was obsessed with aliens and conspiracy theories, Grissom was smitten with maggots and microscopes.

The stark visual style, then innovative but now almost a cliché, included flashbacks and testimonies - not always honest ones - told with increased film grain and desaturated (or heavily filtered) color; and rollercoaster-like macro-shots zipping through the human body to plainly show rather than describe to the damage inflicted on the story's victims. All this is a bit gimmicky at times, but as described by the show's creators it's a legitimate dramatic device and not just look-what-we-can-do razzle-dazzle. 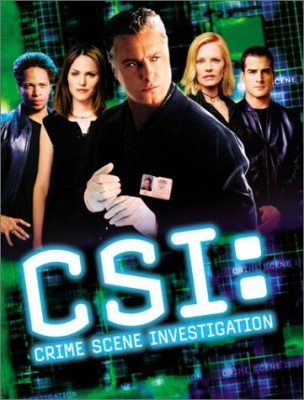 Filmed in Super 35, CSI: Crime Scene Investigation looks phenomenal on Blu-ray. Judging by the gag reel, promos and other material included as extras, it appears that the show was from the beginning shot with 16:9 widescreen in mind. Some of the gag reel footage is framed that way, and a comparison with the network promos (in 4:3 standard def) show that instead of cropping the top and bottom of the broadcast versions for high-def, the sides have been expanded, giving the viewer more screen information, not less. The framing in the 4:3 promos looks tight and sometimes awkward while the 16:9 framing is always on the money.

But even more than the widescreen is the very impressive color and extremely sharp resolution, the kind of thing where you can count the pores on the actors' faces. The lights of Las Vegas's casinos against the black, desert sky obviously helps, but studio interiors are imaginatively lit also; this must be an extremely expensive show to produce. In any case the contrast between the 4:3 standard-def CBS network promos and the 16:9 1080p episodes is mind-blowing. This does not look like a ten-year-old TV show, but a brand-new, big-budget movie.

Audio is equally impressive. There's a 7.1 DTS-HD Master Audio mix (as well as a modest Spanish stereo one) that, like the rest of the show, is a high-concept barrage of pounding underscoring - including the title theme, Pete Townsend's "Who Are You" - and directional audio. Optional English SDH and Spanish subtitles are included.

That Technical Glitch. On disc one, I was able to play the pilot episode (called, surprisingly enough, "Pilot") without any problems, but about five minutes into the second episode, "Cool Change," the picture began freezing up at which point it would jump ahead - sometimes just a few seconds, sometimes more than a minute or two - and it did it so incessantly I had to give up watching that particular episode. When the same thing happened with the third episode, I took the disc out, cleaned it (it had no obvious scratches or other damage, though it had dislodged from its hub during shipment), rebooted my player and tried again, with no luck. The other discs seem to play just fine, and I've played other discs on the player since then so I don't think the problem's there. It could be some kind of firmware issue, but given the deadline for posting this review I have no definitive answer at this time.

This set includes some good supplements, including two documentaries. CSI People Lie...But the Evidence Never Does (19 minutes), from 2002, is 4:3 and in standard-def, but it includes interviews with the entire cast and key creative people, and is an above average examination of the show's genesis and its approach. There's some repetition in CSI Season One - Rediscovering the Evidence (28 minutes), but that's in high-def and it's fun to watch the same interviewees seven years later reflecting back on the show's earliest days.

I didn't think much of the 4:3 LBX gag reel (four minutes), with standard line-blowing and the like, but rather enjoyed all the episodic-specific and generic network promos, partly to study how CBS advertised what for them was a real breakout series that year.

The aforementioned good menu design takes viewers to each episode's promo and, where applicable, deleted scenes. The slam-bang pilot has an extended director's cut with an audio commentary track.

CSI: Crime Scene Investigation may not be the best crime-solving series ever made, but it's highly entertaining and in high-definition the show's qualities are greatly enhanced. This is a fantastic Blu-ray set, one that I think even many longtime CSI fans might initially pass on until they see just how good it looks, what a revelation it is. It's one of the year's best and a DVD Talk Collector Series title.