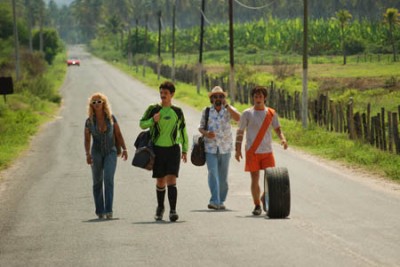 Carlos Cuarón's new film Rudo y Cursi takes the rivalry of brothers, war, and the contests of sport and puts them on one level, ancient playing field. In his script, they all roll from the same basic impulse, the need to belong to something and distinguish yourself, the journey of the individual to understand the power of the greater good.

As his example, Cuarón offers two banana-picking siblings from a rural Mexican outpost, the hotheaded Beto (Diego Luna) and the dopey dreamer, Tato (Gael Garcia Bernal). Brothers from the same mother but different fathers (and their current jerk of a stepdad isn't even the father of their younger sister), the two vie for supremacy in the fight for their mother's heart, something our narrator, the scheming talent scout Baton (Guillermo Francello), tells us is akin to a boy's first uniform. His mother is his identity in the same way that his team will come to define him.

Baton finds the boys on a rundown soccer field. Beto has already earned the nickname "Rudo" for the temper he employs in his goalkeeping, while Tato will only later be called "Cursi" for the way he loves the ball and romances it across the field like writing in cursive. Baton offers them one shot, something they must choose between them, and misdirected brotherly aid gives it to Tato. Eventually, though, both will make the move to Mexico City and the big time. Each will join rival teams and begin parallel careers full of divergent screw-ups--two hicks in the big city just waiting to be gobbled up.

Cursi never wanted to play sports, he was more interested in becoming a singer, and after a fantastic rookie year, he loses his mojo when his accordion-laced cowboy version of a Cheap Trick song tanks and he lets a sexy TV hostess (Jessica Mas) take his eyes off the ball. Meanwhile, Rudo will dominate on the field but lose big gambling. Just as their success was interconnected, so are their failures, leading to a climactic game where one can make good for the other and vice versa. It's all about communication and the right choices.

Rudo y Cursi has all the right elements for a successful sports film. The characters are attractive, the story simple and familiar yet still involving, and everything comes down to one "will he or won't he moment?" that actually will keep you guessing--even if you can guess from previous events how it will turn out. Carlos Cuarón has a firm grasp of the directorial challenges, and despite the tendency for more recent sports movies to use digital trickery to put the audience down on the field with the players (you are the ball!), Cuarón and cinematographer Adam Kimmel (Capote) opt for a handheld steadycam, no-frills approach that has as much interest in the real-life action on the sidelines as it does the penalties and the goals on the grass. 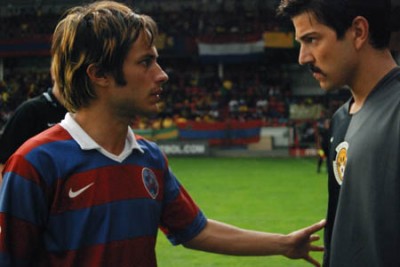 Stylistically, Rudo y Cursi actually has much in common with the verite visual approach of Y tu mamá también, a film Carlos Cuarón co-wrote, and it's a pedigree he smartly trades on. Carlos' brother Alfonso directed Y tu mamá, among others, and Alfonso and his friends, Mexico's other famous directors, Guillermo del Torro (Pan's Labyrinth) and Alejandro González Iñárritu (Babel), serves as producers on Rudo y Cursi. The film has also gotten some early traction for reuniting Y tu mamá's young stars, Luna and Bernal. Seven years on, the teenagers of that film have now grown up. It's interesting seeing how Diego Luna has stepped into the take-charge role while Gael Garcia Bernal continues to play the manchild, just as he has done in films like Science of Sleep. It's a part that suits him, and he does it exceptionally well, but it has ceased to be surprising. Instead, he makes way for Luna to step into the hole and take command.

When it comes time to carve the names of the classics of the sports genre into cinematic stone, I don't have any illusion that Rudo y Cursi will be very high up on the list, though depending on how far down the ranking goes, it should be lurking somewhere in an acceptable lower tier. Timelessness doesn't always matter, though, and the movie has an of-the-moment charisma that is just too hard to resist. I often found myself smiling at the backwoods antics of the country mice out of their element, and I also realized that my guts were all knotted up seeing if they would get out of the traps they laid for themselves. Like the pleasures one might find from watching a good soccer match all on its own, the time you give to Rudo y Cursi is time well spent.