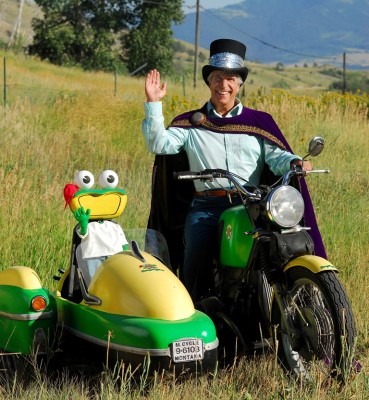 "A Plumm Summer" has been affectionately crafted by a group of individuals seeking to return an element of post-Walt humanity to family entertainment. The effort is welcome, and "Summer," while containing all the dramatic urgency of a "Dora the Explorer" episode, succeeds as something approachable for viewers of all ages, padded generously by a cast of familiar faces to maintain interest in the featherweight proceedings.

It's the summer of 1968 and the "Froggy Doo" show is the must-see television program for children all over the greater Montana area, hosted by magician Happy Herb (Henry Winkler). For the dysfunctional Plumm family, the show is the only burst of joy in their lives, giving brothers Elliot (Chris Massoglia) and young Rocky (Owen Pearce) an opportunity to bond while their father (William Baldwin) loses himself to alcohol, and their mother (Lisa Guerrero) struggles to break free of her binding domestic role. During a personal appearance in town, the Froggy Doo marionette is stolen, leaving behind a heartbroken Herb and few clues to work with. Teaming up with a neighbor girl, Elliot and Rocky kick off their own investigation of the Doo disappearance, while a couple of confident FBI men (Peter Scolari and Rick Overton) arrive to solve the case.

"Plumm Summer" (based on a true story) pulls a few fast ones on the audience as it goes about its business trying to develop a "Wonder Years" environment of innocence for the characters, right down to bittersweet narration from Jeff Daniels as the elder Elliot. The picture commences as a lighthearted jaunt of children's television deception as the Howdy Doody-like icon of Froggy Doo is pinched, piquing the curiosity of our heroes as they suit up with a Hardy Boys-style determination to find the adored wooden creation. While a riding a familiar trajectory for a family film screenplay, the enthusiasm devoted from the cast and director Caroline Zelder to the Doo mystery makes for convincing cinema, especially with an idyllic Montana summer assuming the background space, where the filmmaker finds plenty of prairie perfection to focus on. The opening act is straightforward, bouncy, and sure to be participatory for younger viewers, much like an extended "Scooby Doo" episode.

Where gravitas fits into this whole feature is another matter entirely, and Zelder makes an unconvincing case for sympathy. "Plumm Summer" turns oddly joyless in the second half, dropping the caper routine to examine the domestic woes of the Plumms, who battle with alcoholism, separation anxiety, and possible financial disaster. Wasn't this about a missing puppet at one point? Zelder has plenty of past cinematic achievements to use as her guide to achieve at least palatable melodrama (along with numerous coming-of-age thematic leanings), yet the film crumbles when the oppressive frowns are released, turning an amiable diversion into a chore to finish, due in great part to the sheer weight of the distress. The movie never fully recovers from the sour detour.

The anamorphic widescreen (1.85:1 aspect ratio) image quality on "Plumm Summer" accentuates the color scheme, providing a fairly clean picture with a rich outdoorsy feel to it. Since most of the film deals with rural locations, the film is pleasant to look at, especially during any scene incorporating the vibrant afternoon photography. Skintones and black levels remain stable throughout.

A 5.1 Dolby Digital mix on the DVD is nothing dynamic, keeping all the action to the front channels for simple atmospheric intent. The film's soundtrack is heavy with famous songs of the '50s and '60s, and while the tunes add a kick to the mix, it's nothing to demo a system with. Dialogue remains free of aural clutter.

The feature-length audio commentary with writer/director Caroline Zelder and writer/producer Frank Antonelli seems awfully rehearsed by the duo, who share a snappy energy between them as they attempt to explain their stimulations and intentions behind their movie. While nothing earth-shattering is reported on the track, hearing about the factual background of the kidnapping case, Zelder's filmmaking aspirations, and the general pleasantries of the shoot makes for an informative listen, even when the commentary swerves into shameless praise for anything and everything.

"Gag Reel" (3:51) is the normal collection of mix-em-ups, though augmented here by a prevalence of kid-fueled tomfoolery.

"Behind-the-Scenes Music Video" (2:40) is a nice change of pace, condensing on-set footage to a music montage for easier consumption. Short but effective.

"Behind-the-Scenes on the Red Carpet" (6:13) takes cameras to the premiere of the film, where the cast, crew, and a few guests wax rhapsodic about their experience making the picture.

While Zelder fights to keep "Plumm Summer" on task, she's gathered an ensemble here that fills the edges of the world quite pleasantly. In addition to the always welcome Winkler, there's Guerrero, Baldwin, Clint Howard (as Froggy Doo's clown rival), Brenda Strong, and the delightful Scolari around to boost the picture with needed personality and performance quirk. The cast efforts perk up "Plumm Summer" when it needs it the most, especially in the final act, when Froggy Doo's trail is picked up again and Zelder regains her storytelling footing, delivering a kindly conclusion to the adventure instead of dwelling in the darkness longer.